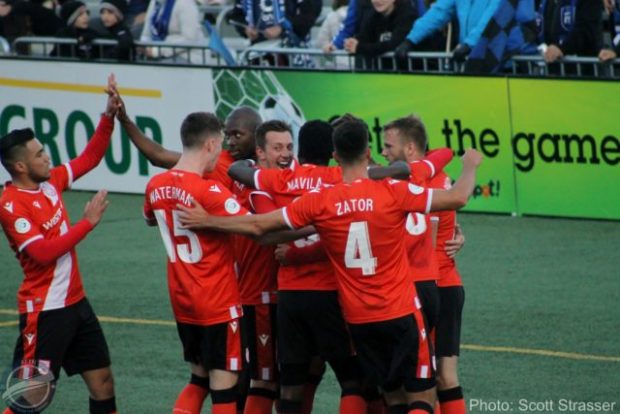 Cavalry FC maintained their unbeaten record against FC Edmonton Sept. 11 with a 1-0 win in the fourth “Al Classico” derby of the inaugural Canadian Premier League season.

The victory at Clarke Stadium – which earned Cavalry the “Wildrose Cup” for winning the overall series between Alberta’s two CPL clubs – ensured the Calgarians did not concede a goal in their four fixtures against their provincial rivals this season. Cavalry went 3-0-1 against the Eddies in 2019, scoring five goals in the process.

The three points also ensured Cavalry overtake Forge at the top of the CPL’s fall season standings, with a 6-1-4 record, and seven games left to play. Forge have two games in hand, however.

After a cagey start to the match, the derby exploded to life in the 26th minute. FC Edmonton centre back Amer Didic brought down Cavalry winger Jose Escalante with a mistimed slide tackle on the edge of the box, and former Eddies captain Nik Ledgerwood confidently slotted the penalty kick past Connor James into the bottom corner to give Cavalry a 1-0 lead. 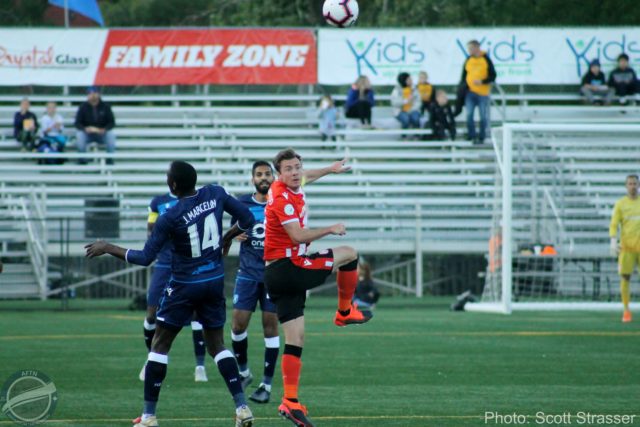 Ledgerwood was an important figure in the midfield for Cavalry. The former Eddies captain always seems keen to put in a shift against his former club.

Smelling blood, Cavalry heightened their press for the remainder of the half, and the additional pressure nearly paid off in the 43rd minute. A free kick from Julian Büscher was floated into the box, and Escalante eventually sent a well-struck half-volley towards goal that slammed off the bottom of the crossbar.

Cavalry’s control of the first half was reflected in the statistics; the Calgary side outshot Edmonton 8-2, enjoyed 54 per cent of possession and prevented the Eddies from registering a single shot on target.

One notable stat in which Edmonton led in the first half was fouls – 10 to three. As in the three previous meetings between these two teams, the Sept. 11 Al Classico was a true “Battle of Alberta,” with both sides showing a willingness to dish out physical challenges. 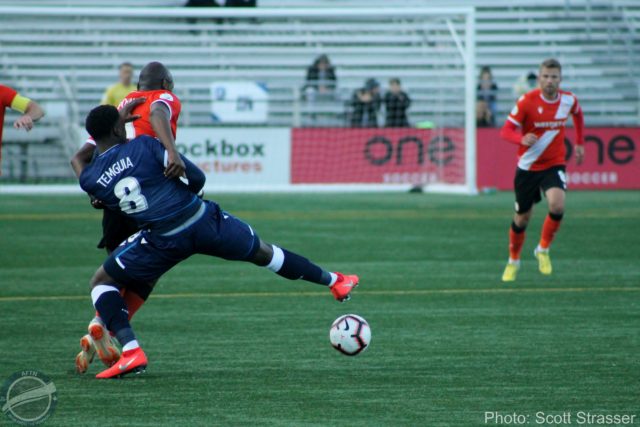 As with the three previous matches between Cavalry and FC Edmonton, the Sept. 11 contest was filled with tough tackling and plenty of physicality from both teams.

There was little to discuss in the early goings of the second half, until Tomi Ameobi nearly levelled for the home team in the 70th minute following a counter-attack started by energetic substitute Edem Mortotsi down the right side. Cavalry ‘keeper Niko Giantsopoulos rushed off his goal line to make the save with his knee.

Shortly after, Eddies defender Jeannot Esua was sent off in the 75th minute for a foul on, and ensuing confrontation with, Escalante. 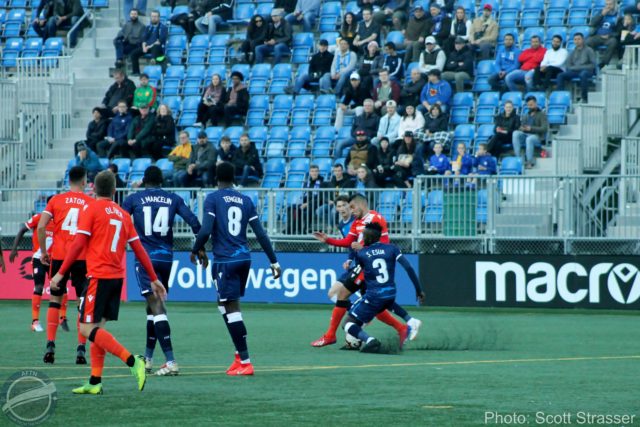 Though it didn’t happen on this play, Josè Escalante drew a red card from Edmonton’s Jeannot Esua in the second half.

Despite going down to 10 men, Edmonton played some of their best football in the final 15 minutes.

Giantsopoulos – playing his fourth CPL match of the season due to Marco Carducci’s call-up to the Canadian men’s national team – had to come to his team’s rescue again in the 89th minute. The 25-year-old had to stretch across his line to palm a goal-bound free kick from Oumar Diouck away.

With Edmonton pressing high in search of a late equalizer, Cavalry had a chance to score an insurance goal in stoppage time, but substitute striker Dominique Malonga squandered his breakaway with a heavy touch that James easily corralled.

Regardless, Cavalry’s defenders managed to hold on to the final whistle to record their 11th clean sheet of the season. 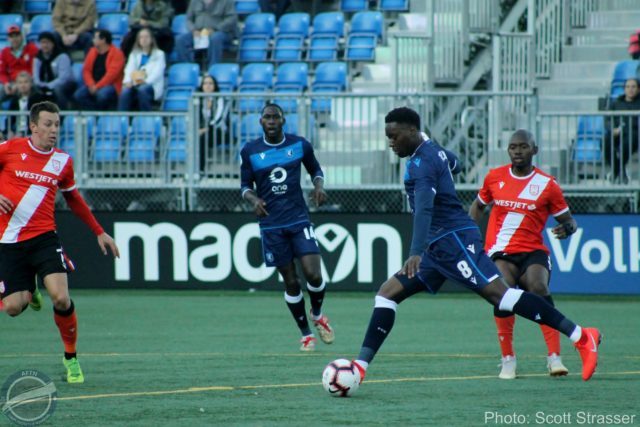 In four games, the Eddies failed to score a goal on Cavalry this season.

“It’s a derby, so it’s going to be a bit physical. I thought, honestly, that the ref let the game get out of hand. There was a chance to book a player on their team for a chance after the play had stopped. If that gets booked, some of the other stuff probably doesn’t happen. He made a choice to let the game go, so he’s responsible for why the game got how it got.”

On the red card to Jeannot Esua…

“The kid who drew it is a good player. Escalante is a good player, but he’s looking for that. He stepped in and he was the one who approached Jeannot [Esua]. He was looking to do something. Jeannot stood his ground, put his chest into him and he’s dropped like he was hit with a bazooka, and we get the red card for it.

“Growing stuff for us, for sure, as a team. We have to have a bit about us where we can just take that and walk the other way. Jeannot will learn. He’s devastated by it, of course, but he’s a quality young player who will learn from it. It could have been a yellow for me.”

On the poor results against Cavalry this season, and changes that should have been made…

“That second half is how we can play Cavalry. For me, there was one team on that pitch that was trying to win that game, and that was us. The red card had an impact on it, but we still tried to attack with a man down. [We were] getting in behind their defenders and making them turn. Their defenders are fantastic when you play in front of them, but as soon as you get them turning and as soon as you have a bit of pace behind, that’s how you can attack that team. We were doing it, and creating some chances.

“Edem [Mortotsi] came in and gave us that quality. There was that one play where he came in and set the ball to the side. It was fantastic. We think we have the formula to actually go at this team. I thought we had it right for the most part tonight. Slow start, for sure, from both teams. The first half was a nothing – you can’t be giving up a penalty like that. That’s on us.

“The headlines will be that we didn’t score on them again, but I tell you what, if you give us that [second] 45 minutes against any team in this league, we’re going to score more than we’re not going to score.”

“That just can’t happen, and [Didic] knows that. He’s a good player and a good defender. I’ve been hyping him up that he should be looked at by John Herdman. I still believe that. It was a mistake. He had a rush of blood to the head. We had good cover behind him – Jeannot was in a good position. There was no need to go to ground. He made the choice to do that, and it cost us.”

On the physicality of the match…

“That was one of the things the ref said right at the beginning of the game – that he was going to let a few things go to let the game flow, so that it wasn’t stop-start. But I think we were a little slow out the blocks in the first half. Much better in the second half. On another day, again, if I take my chance, it could have been a different game.”

On his chance in the 70th minute…

“I tried to fire it back across the keeper but I didn’t wrap my foot around the back of the ball enough. Again, we’ve got the quality in the team to create chances like that. I think you saw that in the second half, especially when Edem came on. He’s a player who looks to give forward and gives us another dimension. If we had started the game like that, it could have been different.” 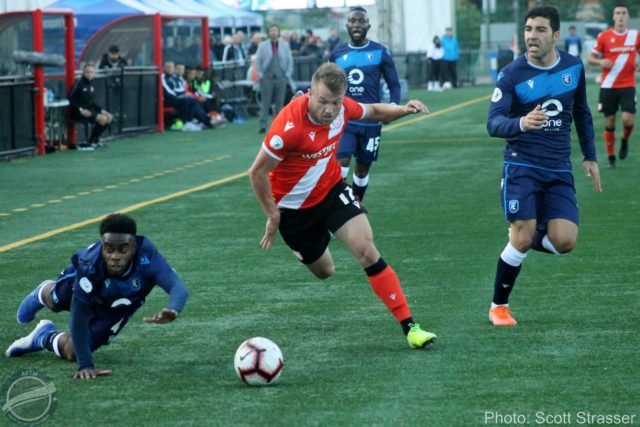 Nico Pasquotti fights for the ball down the right wing in the first half.

On Cavalry’s consistent success against FC Edmonton this year…

“Edmonton are a tough team. I said at the beginning of the season, they’re a team with history, experience, and a lot of local players who have come through the academy, so they know what it means to represent it. We know it’s never going to be an easy game. Even with 10 men, they put a lot of pressure on us. What we’ve got is resilience in abundance.

“In the first half, we were very good. In the second half, I’d have liked us to manage the game better, but they threw everything at us and we still defended it. We’ve kept four shutouts against them.”

On the physicality of the game…

“That’s what you’d want in a derby. Sometimes they’re not the prettiest. If you look at Celtic and Rangers, Liverpool and Everton, and the Milan derbies – people wear their heart on their sleeves. I think what you saw today was another side of derbies. It was a feisty one. Edmonton wanted to beat us and we refused to lose.”

On the importance of winning the fall season…

“We’re treating this like a treble – spring season, fall season, championship final. I think what the boys are playing for is to be the undisputed champions. Add the points together, and that’s a regular season in most countries. That’s how we’re approaching it. We love to play the next opponent and try to get the three points. This is a tough place to come, and we’ll keep going [from here].”

On the separation of Edmonton, Cavalry, and Forge and their respective performances against each other…

“It’s a great triangular series. We have had a lot of success against Edmonton, but they’ve all been close games, as have our games against Forge. What I think Edmonton does well against Forge is bully them and make it physically imposing. Obviously, Forge doesn’t like that. They still have to come through Alberta in the run-up to the final. There is still a lot of football to be played.”

“He was brilliant. That keeper is a giant. Marco is the same – they can be quiet for so long, but when their time is called upon, they make big saves. Niko is good enough to be a number one. When John Herdman called and said, ‘You won’t have Marco for the Edmonton game,’ that was no problem, because he kept a shutout the last time we played them. He’s a fantastic keeper and a great professional. He won the three points for us today, as well as [Nik Ledgerwood].”

On taking the penalty in front of the Eddies supporters…

“I knew I was going to celebrate. I was confident. I hit a hell of a penalty in Winnipeg, so I felt confident to step up and do it again. I know the goalkeeper coach and Connor [James] quite well, so I thought they’d probably watch video, so that’s why I switched it up and went to the other side. But I don’t think there was a huge amount of fans there to throw me off.”

“Like Tommy said, it was a derby and a battle. FC Edmonton has a lot of local guys who wear the jersey with a lot of pride. They want to prove they’re a part of this team and the culture that is being built across the CPL. They want it to be a little more important for them, because they’re playing for Edmonton and they’re from Edmonton. Hats off to our guys because we matched it the whole game, and we knew it was going to be a huge battle.” 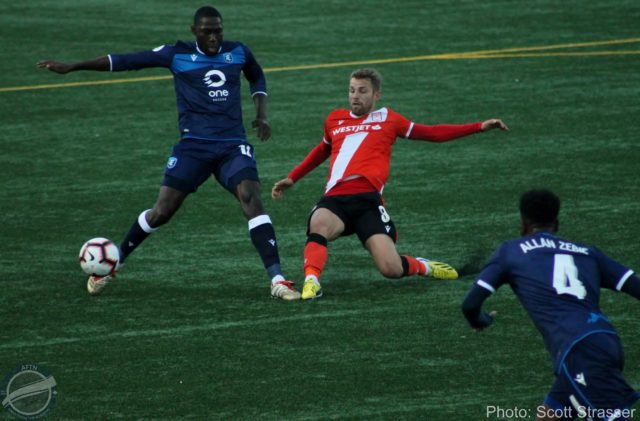 Julian Büscher goes for a tackle in the first half.