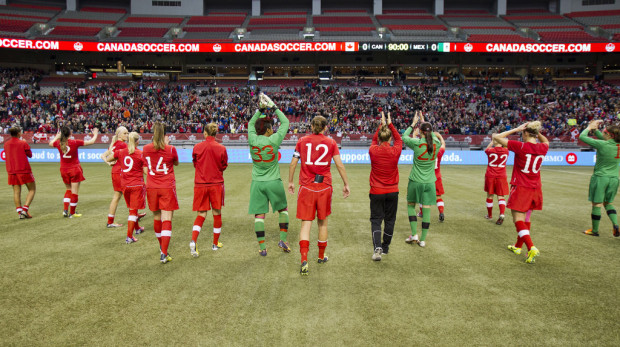 Despite having a number of chances in the match neither Canada or Mexico were able to score in a 0-0 draw at B.C. Place.

Both keepers made some important stops but the early end to end going soon settled and there was an overall staleness to the game.

Head coach John Herdman described the game as “frustrating” and said he “felt sorry for people watching” after the match for much of the performance his Canadian women served up in their last home game of 2013. But he did see some positives, especially in the play of young substitutes Sura Yekka and Adrianna Leon.

With places in Canada’s 2015 World Cup squad at a premium, he made it clear that more was expected from the side for the right to wear the jersey at the tournament.

The Canadians pressed early in the first with their best chance coming in the fourth minute when Diane Matheson came down the right wing and sent in a cross that Christine Sinclair couldn’t corral in the box.

Sinclair would have another opportunity at the top of the box a few minutes later but her shot was collected by Cecilia Santiago.

Mexico started to establish themselves in the opening ten minutes including a sequence where Erin McLeod came up with a toe save to deny Guadalupe Worbis.

It looked as though Canada had broken through in the 13th minute when Brittany Baxter put the ball in the net but an offside call would negate the goal.

A minute later, after a couple of moves in the penalty area, Worbis got free to take a shot which was caught by McLeod.

Sinclair had another chance just after the quarter hour mark when she was sent in by Matheson but after rounding the charging keeper her attempt was blocked by the defender.

Around the half hour mark early sub Sura Yekka sent in a cross from the right side that found Desiree Scott whose attempt from outside the box was deflected for a corner.

There was very little in the final 15 minutes of the first half and the two teams went into the break scoreless.

Canada started the second with a little more possession and had a chance early when Baxter sent in a cross that Sophie Schmidt missed over the bar.

The Red and White continued their pressure forcing Santiago to come up with a big save off Kaylyn Kyle.

Sinclair rose above the defenders off the ensuing corner to get a free header but directed it wide of the net.

With less than 15 minutes to go Canada had a couple of chances in and around the box but the Mexican backline blocked every attempt.

The Canadians continued to look for the breakthrough as Captain Sinclair cut in from the right and fired a shot that was smothered by an outstretched Santiago.

There would be no goals for either side today and the match ended in a scoreless draw.

This will most likely the final match on home turf for the Canadian women but it is rumoured that the team will participate in a South America tournament next month, with confirmation expected to come later this week.