The 2020 Canadian Premier League season wraps up today in PEI with defending champions Forge FC battling it out with contenders to the throne HFX Wanderers in what should be an exciting encounter at The Island Games.

The winners will be crowned this year’s CPL champions, lifting the North Star Shield in the process and booking themselves a spot in this year’s Canadian Championship final against Toronto FC.

The CPL champ taking on the MLS side with the best record from the recent intense meetings between Montreal, Toronto, and Vancouver is a tantalising proposition. It may be a situation forced upon Canada Soccer by the current pandemic, but it’s been an exciting way to decide this year’s Voyageurs Cup winner.

CPL Commissioner David Clanachan hailed it as “a great decision” by Canada Soccer to pit the CPL champion against the best Canadian MLS side in a one game final. Only there is a rather large fly in the ointment. With the CPL season wrapping up and the MLS season in full-on two games a week mode, when will there be a window to actually get this game played?

This issue was highlighted on Thursday when Toronto FC President Bill Manning was interviewed on the Footy Talks Live podcast.

TFC President Bill Manning tells @FootyTalksLive that the Canadian Championship Final date will be determined once the Toronto FC season is done.

He says that he hopes to be playing it in December/January.#CanPL | #TFCLive

Not ideal, in so many ways, from the weather aspect, to the unpreparedness of the CPL side for a cup final a couple of months after their season has ended, to the contract situation of current players on both sides.

The easy answer would have been for Canada Soccer to work with Major League Soccer’s fixture makers to ensure that there was a space this coming midweek for this match to be played before the three Canadian MLS sides head down to America for a couple of months.

This didn’t happen and it’s now in the hands of Canada Soccer to find out the best time to play the match.

“I’ve three thoughts on this whole thing,” Clanachan said on a media conference call on Friday. “First of all, Canada Soccer, in our opinion, made the best decision they could on how to handle the Canadian Championship this year, so we were very pleased with that.

“A little tongue in cheek, I told the MLS clubs I was actually a little disappointed, as I thought that two CPL clubs would be in the final this year, and we had a good chuckle on that. But we’re delighted at the CPL to have our champion play Toronto FC in the final. That’s going to be a great game and that’s going to be great for Canadian soccer at the end of the day.

“The final date and location is still to be determined, and once we find out what the MLS schedule looks like, there’s a lot of complexity in putting this whole thing together. So we look forward to the fact that Canada soccer will make their decision and they’ll lay out where it’s going to be and when it’s going to happen and we’ll follow suit on that perspective.” So will Clanachan be pushing hard to ensure that this doesn’t unfairly disadvantage whichever CPL side makes it through? 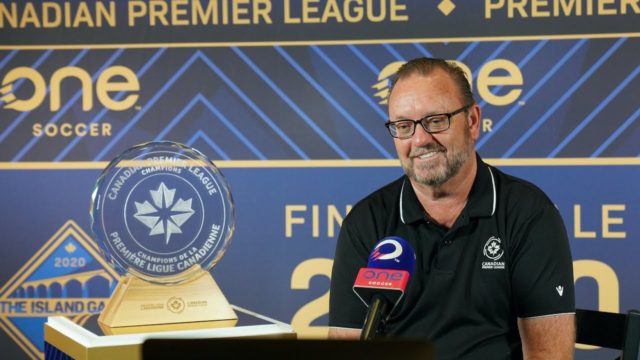 It is hard not to see how any decision wouldn’t be to the benefit of the MLS side. Not a criticism of Canada Soccer, just how the situation is with all the Covid restrictions.

There’s a few ways around it perhaps, none of them ideal.

You could fly the CPL winners down to the US and play in Connecticut, where TFC will call their temporary home. They’d face 14 days quarantine when they returned, but it would keep them fit and fresh for the final.

If Forge win the CPL title, their group would have been together for their scheduled CONCACAF League preliminary round match at the end of October, although it feels that is not likely to be going ahead. So keeping them together for a November or December Voyageurs Cup final wouldn’t be too much of a stretch.

It’s just the weather then comes into things, big time.

While he hasn’t given the Canadian Championship aspect to the CPL final any thought at all, HFX Wanderers head coach Stephen Hart did have some thoughts as to when the match should be played, no matter whether it is his side or Forge FC that earn the right to face TFC.

Well Forge FC head coach Bobby Smyrniotis may be one of them, as he’d seem to relish the chance to take on TFC in Ontario in December.

“Yeah, why not?” Smyrniotis said. “If that’s when they say we play, we play. I’m not a person who will complain about things, who will look for any excuses. It is what it is at this point. If we could play it next week, great. If we could play it in two weeks, even better. If it’s in December, January, we’ll take that game and whether it’s us or Halifax, we’ll put our best foot forward.

“But one thing I’ve learned about 2020 is that nothing is normal, nothing is straight forward. So I hope that there’s a solution to play the game sooner rather than later, but if it’s later, everyone who is involved will have to prepare for that and that’s how it will be.”