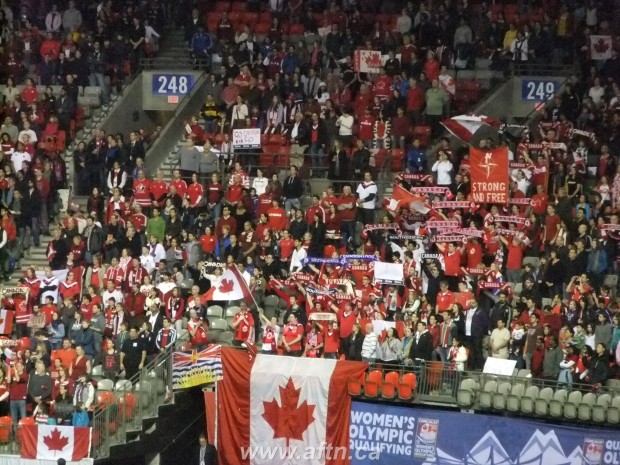 The 2012 CONCACAF Olympic Qualifiers are all done and dusted.

There’s been cheers. There’s been tears. But most importantly, there’s been two berths booked at the Olympics in London this summer and Canada are proudly filling one of them.

The tournament has been a huge success, both on and off the pitch.

The Canadian women have performed well, given it their all and secured their main task in hand, Olympic qualification.

For many here in the west, there’s also been a big story in the stands, as Vancouverites have taken to the team and the tournament, and turned out in numbers at BC Place for the semi-finals and final.

The overall attendance for the tournament was over 160,000. The attendance of 25,427 for Sunday’s final set a CONCACAF record for a women’s Olympic qualifying match, beating the previous record set on Friday.

Average attendance for the group stage was 8,135, whilst the overall average was close to 15,000. With the tournament needing an average crowd of around 10,000 to break even, it’s a pretty satisfied Canadian Soccer Association and CONCACAF right now.

Despite these numbers, and the passion shown in the stands, don’t expect Vancouver to be hosting Canadian Men’s international matches any time soon.

The CSA are extremely happy with Vancouver, BC Place and this tournament, that isn’t the issue here:

”The past eleven days have been an incredible success for the sport of soccer and the Canadian Soccer Association, both on and off the pitch,” stated Peter Montopoli, General Secretary of the CSA. ”We could not be more proud of the Women’s National Team and their world class performance that has resulted in their qualification for London 2012. The record crowds and nation-wide attention generated during the tournament is indicative of the country’s passion for the beautiful game.”

Passion indeed, and not exactly what the CSA were expecting:

”It has exceeded our expectations, but we’re also not surprised at the support that we received here.” added Montopoli.

The hope for Vancouver fans is that the attendances would be enough to attract bigger and better international games to the city, and more frequently.

Venues for the 2015 FIFA Women’s World Cup are still being finalised, but the CSA hope to announce what those will be by the summer. Vancouver has long been touted to host the final.

FIFA had a delegation on a site inspection of BC Place on Saturday morning and they took in the matches on Friday and Sunday. Edmonton and Montreal have also been part of their visit, but they were reportedly impressed by what they saw in Vancouver.

The artificial pitch could still be an issue for getting the final, with the obvious option of bringing in some real grass to also consider. That’s not something we have a good record with in Vancouver mind you.

American coach Pia Sundhage wasn’t the greatest fan of the BC Place surface, when asked post game Sunday what she thought of Vancouver as a possible venue for the World Cup Final:

”It’s hard with this turf. It’s beaten them up. There is a reason why some of the players, like Lepeilbet, didn’t play today. We played on the turf, went only one day, then played again. So that’s something that makes it so much harder to play than on natural grass.”

The women’s game aside, the big question on the lips of many here this week is would Vancouver be seeing the Canadian Men’s National Team in the city any time soon? Montopoli was cagey, due to his surroundings, but reading between the lines, the answer was very clear:

”We’ll be making some announcements on February 2nd. We have something planned to announce, our future schedule for the mens and womens sides.

On the men’s side, if we’re talking World Cup qualification matches, then you have to look at the surface that you’re playing on, you have to take a look at where the players are coming from, and where we’re playing [around the home games]. There’s a number of parameters.

Bringing the surface up seems a little strange, as BC Place has a FIFA authorised polytan pitch. When pushed on this, Montopoli at first said ”It has to be grass”, before quickly back-tracking and adding:

”This surface has been very, very good, in terms of the polytan artificial surface for the future. We would need FIFA approval. It would have to continue to be a 2 Star FIFA surface, and again that requires FIFA approval.”

We all know this wouldn’t be an issue, so what is really stopping the CSA bringing World Cup qualification games here?

”I think the other part is our coaching staff and players prefer grass. There’s a preference for that.

If you look at whoever has grass in our country, it would be BMO Field, Saputo Stadium and Moncton, unless there’s more you can educate us on and we can go and check out.”

So all but actually saying that the Men’s team aren’t coming to Vancouver any time soon. Moncton, get your petition started.

I can see where the CSA are coming from in some regards.

Travelling from Europe to the west coast does add a little inconvenience to the players. Longer journeys both to here and home again, along with the increased time difference. It doesn’t appear to be an issue for the American team of course. The non grass pitch is the other big issue, but one that could be sorted if the will was really there.

So Vancouverites shouldn’t be holding their breath to see their men’s national football team in these parts for the foreseeable future. I could certainly see some women’s friendlies building on the success of this tournament. Maybe even the odd U23 men’s game and below.

It’s not going to please everyone, but at the end of the day, if the men’s team qualify for the 2014 World Cup and are heading down to Brazil, does it really matter? Or should the CSA be helping to promote and develop the game, and the fanbase, throughout the country by taking both the men’s and the women’s teams to different venues nation-wide?