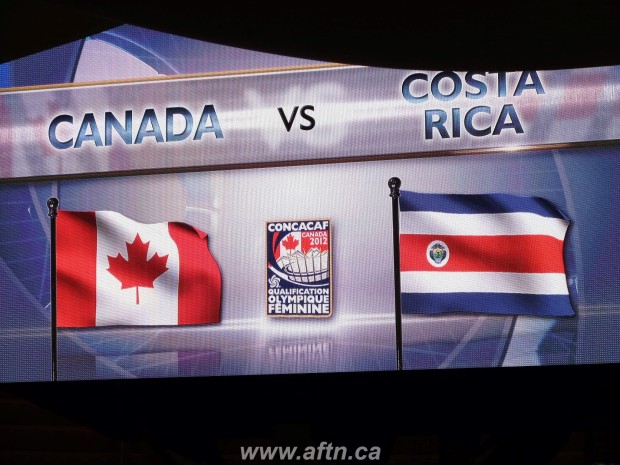 It was almost a given, but until the result was officially in the record books, the Canadian fans at BC Place this evening always had that little bit of nervousness about them.

Two goals in the first ten minutes soon put any fears aside, and a party atmosphere entailed amongst the 8,105 fans in attendance for the remainder of the game as Canada clinched the top spot in Group A with a 5-1 win over Costa Rica.

On paper, Costa Rica should have provided the Canadians with their sternest competition in the tournament so far and the opening minutes certainly gave you the impression that the Costa Ricans were here to make a game of it.

A Christine Sinclair goal in the sixth minute, soon killed that. 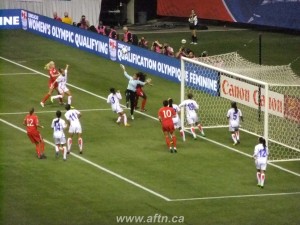 After forcing a series of corners, it was just a matter of time before the Canadians took the lead, and Sinclair’s sixth goal of the tournament may have been a scrambled effort but it was a nerve settler.

Sophie Schmidt doubled the lead in the tenth minute, after Costa Rican goalkeeper Julieth Arias couldn’t hold on to a low cross, then fan fave Kaylyn Kyle grabbed her first goal of the tournament with a fine header in the 20th minute.

Canada came close on a couple more occasions, with Schmidt having a particularly fine half, before Sinclair got her second, and Canada’s fourth, with a low drive in first half stoppage time.

Canada had made seven changes to the starting line up from Saturday night’s win against Cuba. With the game in the bag, rest for the key players and keeping everyone free from injury was now the key, but coach John Herdman surprisingly only made two substitutions at half time, neither of them for Sinclair, with another one coming during the half.

Whoever the Canadians had on the pitch, they were always going to be too strong for the Costa Ricans and the host’s goal tally was increased in the 50th minute thanks to a hilarious own goal.

The goal was credited to the unfortunate Marianne Ugalde, whose harmless backpass trickled under the foot of the hapless Arias in the Costa Rican goal.

Sinclair nearly nabbed her hat-trick moments later, when Arias again blundered and spilled a header from sub Chelsea Buckland right at the feet of the Canadian captain.

In uncharacteristic fashion, Sinclair miss-hit her shot and blasted wide from four yards out, much to her amusement.

Canada understandably seemed to take their foot off the gas a little for the remainder of the game.

Substitute Brittany Timko had a great finish ruled out for offside in the 76th minute, and Canada were made to pay for some sloppy defending with two minutes remaining.

A seemingly harmless ball in from the right from Raquel Rodriguez, wasn’t dealt with by Robyn Gayle, allowing substitute Fernanda Barrantes to nip in and beautifully volley past Karina Leblanc in the Canadian goal.

It was the goal of the match and questions will be asked about Canada’s suspect defending and how they will cope against much stronger opposition. This was the first time they were really tested in the tournament and their first non clean sheet.

Barrantes’ goal also meant that the game was the first one of the tournament to see both sides scoring.

Overall it was a very comfortable win. One which, again, saw Canada never needing to move out of first gear. 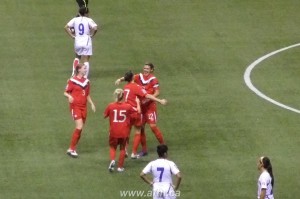 What was particularly pleasing for Canada tonight was that the goals came from more than just Christine Sinclair.

A criticism levied the other night was that if Sinclair wasn’t scoring for the Canadians, who was? Herdman said that was something they were working on and we saw some early results of that tonight with two other players getting on the scoresheet. That’s five non Sinclair scorers so far in the tournament.

The loser of the US-Mexico game on Tuesday evening now awaits Canada in the crunch semi-final. The winner of that particular tie is basically guaranteed a spot in London in the summer.

For the losers, and Canada, a battle awaits.

You get the feeling after tonight’s showing that the Canadian’s are ready and raring to go. They just need to make sure they stay focused at the back.