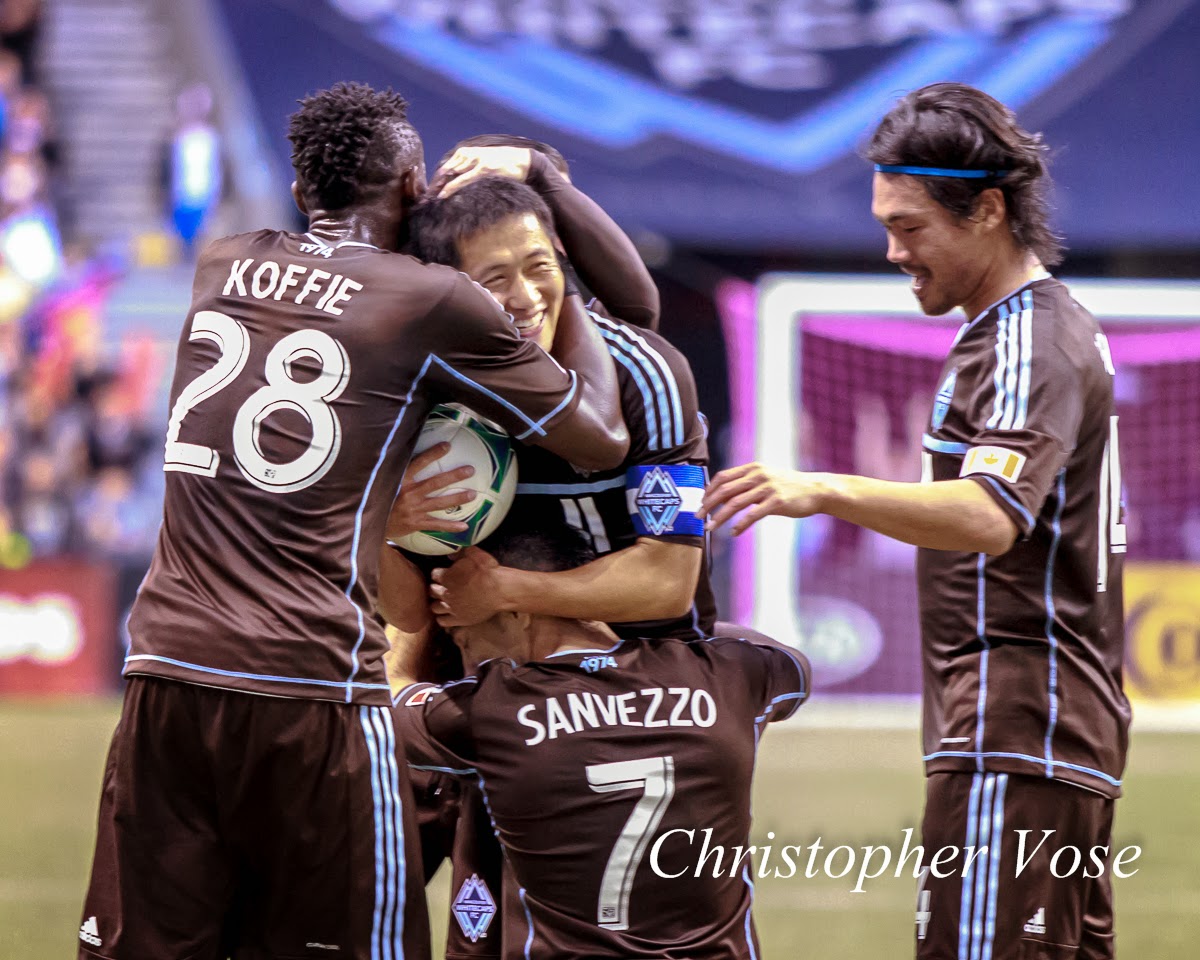 Camilo Sanvezzo hit a stunning hat-trick to win the MLS Golden Boot in some style and give Vancouver Whitecaps a winning 3-0 season send off over Colorado Rapids at BC Place on Sunday afternoon.
The Brazilian’s three goals took his season tally to 22 and gave him the outright Golden Boot title from Chicago’s Mike Magee, in a comfortable team performance that just raised more “what if” questions.
The other big storyline of the day was the changing of the guard at fullback, with veteran YP Lee retiring and Residency graduate Sam Adekugbe making his professional debut.
Camilo was needing two goals to win the MLS Golden Boot and he started lively, forcing Clint Irwin into a one handed save in the 10th minute from eight yards out.
Irwin produced another stunning one handed stop four minutes later, when Camilo collected a ball from Kekuta Manneh and tried a curler into the top corner.
The Whitecaps kept the pressure on, winning a corner, and Brad Rusin got on the end of it but headed straight into the goalkeeper’s arms.
The Rapids weren’t posing too much of an attacking threat but had their best chance in the 27th minute when Gabriel Torres surged forward and fired off a shot which David Ousted could only parry before recovering and stopping Edson Buddle’s scrambled effort on the line.
Both teams exchanged chances, with Camilo coming close once again.
The Brazilian finally got the goal he was craving when Manneh was sent flying in the box by a clumsy Marvell Wynne tackle in the 43rd minute and the referee pointed to the spot. The Caps top scorer hit a rocket down the middle to give Vancouver a 1-0 lead at the half.
The second half soon settled into having an end of season feel about it, which was particularly surprising with Coloradoneeding the points for playoff placing. Both teams, Vancouver in particular, had some good build up play but no killer balls at the end of them.
It felt as if the game was going to play out as a single goal win when the Caps doubled their lead from pretty much nowhere in the 74th minute.
Matt Watson played a short pass to Camilo on the edge of the box and the striker twisted and turned Wynne and Drew Moor inside and out before slotting the ball past Irwin for his league equalling 21st of the season.
He wanted one more to give him the sole lead and it nearly came in the 83rd minute when substitute Matt Watson unselfishly cut the ball back from the byeline and Camilo could only look on it disbelief when his goalbound effort was cleared off the line by Moor.
The Brazilian only had to wait another minute before he got his magic moment.
Russell Teibert played a delightful chip over the Colorado defence and Camilo took it first time to fire past Irwin for his hat-trick and his Golden Boot winning 22nd goal of the season.
There was still time for the stadium to give YP Lee a standing ovation and the Korean legend came off in stoppage time to bring the curtain down on an illustrious career.
It’s been a season of ups and down for Vancouver, but it finished with a bang and not a whimper. The Whitecaps won. At the end of the day it all meant nothing, apart from the well deserved personal honour for Camilo. There were at least some promising signs to end it all.
Bring on 2014.
FINAL SCORE:  VancouverWhitecaps 3 – 0 ColoradoRapids
ATT: 21,000 sell out
VANCOUVER: David Ousted; Young-Pyo Lee, Jay DeMerit, Brad Rusin, Sam Adekugbe; Gershon Koffie, Nigel Reo-Coker, Russell Teibert, Daigo Kobayashi (Darren Mattocks 61); Kekuta Manneh (Matt Watson 73), Camilo Sanvezzo  [Subs Not Used: Brad Knighton, Andy O’Brien, Jun Marques Davidson, Erik Hurtado, Tommy Heinemann]
COLORADO: Clint Irwin; Marvell Wynne, Drew Moor, Shane O’Neill, Chris Klute; Nick LaBrocca (Martin Rivero 57), Nathan Sturgis, Gabriel Torres, Hendry Thomas, Deshorn Brown (Dillon Serna 77); Edson Buddle (Jaime Castrillon 67)  [Subs Not Used: Matt Pickens, Anthony Wallace, Atiba Harris, German Mera]

Reaction:
Martin Rennie on the season:
“We finished the season really well tonight. The margins this season have been so small…It’s one of those years where teams have done extremely well and I think we have.”
Martin Rennie on the team’s performances this year:
“We feel that we haven’t really underperformed this year. We feel that
we’ve actually done extremely well. Obviously we want to do better.”
Martin Rennie on Camilo:
“We’ve really seen his development and progress this season, which has been fantastic for us.”
Martin Rennie on Sam Adekugbe’s performance:
“I thought he did a great job. Real credit goes to the people who work in our academy…I thought he really strolled through the game. He did extremely well. he hardly put a foot wrong.”
Camilo Sanvezzo on winning the Golden Boot:
“It’s very important for me. At the start of the season, no one believed. Just me and my family.”
Camilo Sanvezzo on Carl Robinson:
“The coaching staff help me a lot, especially Robbo. After training I say, Robbo, please help me with some finish and every single day he’s there with me, helping me a lot.”
YP Lee on his retirement:
“I have retired from soccer tonight but I am feeling so happy this moment because it is exactly what I wanted.”
YP Lee on his time in Vancouver:
“I will never forget the last two years in Vancouverin my life. So this club will remain in my mind as my club at all times.”
YP Lee on having captaincy in his last game:
“I’m a captain but you know, there’s many difference between imitation and original. I’m an imitation captain today!”
Sam Adekugbe on his MLS debut:
“It was really exciting. Once I got a few touches on the ball I was able to do some of the stuff I can do best but overall I think it was definitely a great experience.”
Sam Adekugbe on making it as a professional:
“Growing up as a kid, I remember talking to my brother and saying I wanted to make my debut by at least 18 years old. This has to be one of the best experiences of my career. It’s just the start but hopefully things will come in the future.”
Sam Adekugbe on what he will take back to his Residency teammates:
“Just to show them that it’s just another stepping ladder. We’re able to get to that position. Just to show them that we can do what they can do. We just have to build ourselves as players, become more confident, work on the things that we need to work best on and things will open up….Hopefully a lot of guys can come through.”
Jay DeMerit on the win:
“We want to end on the right note because it’s a team that cares and it’s a team that wants to get better and tonight proved that.”
Jay DeMerit on Camilo:
“Throughout a long season it takes a consistent goalscorer to win the Golden Boot. These things aren’t by flukes. It shows the qualities that Camilo has and brings to our team.”
Tags: Colorado Rapids, major league soccer, match report, MLS, post game, report and reaction, Vancouver Whitecaps