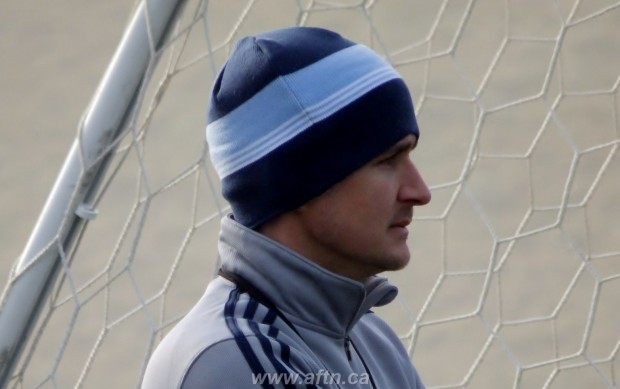 Going in to today’s MLS SuperDraft, Carl Robinson had talked about the perennial quandary teams face – do you pick the best player available or make your selections based on squad needs?

When talking to the media on Wednesday, Robinson had identified three areas of his squad that he felt still needed to be strengthen – centre back, the wide area and the forward position. Two, perhaps all three, of those needs were ticked with Thursday’s two draft selections in what Robinson referred to as a “promising draft” for the Whitecaps.

“That was part of my plan coming in to the draft,” Robinson admitted during a conference call to local media on Thursday afternoon. “To try and get the best player available, of course, but it had to have some substance and I needed to know what positions I was slightly weak in. Obviously losing two centre backs was an area, and we addressed that. The wide areas, Kay can fit into that if need be or if we’re able to bring someone else in. It was a very promising draft for us.”

You never know how players are going to adapt to the professional ranks. Can they make the grade? Can they hack going from being a regular first choice starter to often a reserve player or at best a bench guy? How do you feel when you’re drafted for MLS but playing USL?

It takes a mentally strong individual to handle it all it sometimes. Christian Dean has previously admitted that he had found some of last season tough going but Robinson feels that while it was a difficult year for Dean, he will have learned from it and be better as a result of it.

Both Parker and Banjo look to have potential, to perhaps varying degrees. Parker is by far the more MLS ready, whilst Banjo has some exciting attributes that need honed in what is now the ideal environment for him.

Robinson had highlighted Parker as a target before flying down for the MLS draft and combine. The Whitecaps were the first team that the St John’s senior spoke with and Robinson not only got his man, but a player he feels has the attributes he wants in a Whitecaps player and the skillset to make a difference to the team and his backline.

“We knew about Tim going into the combine,” Robinson said of the overall 13th pick in the draft. “I think his performances in the combine, he was arguably the best centreback there. If you speak to him, he’s educated, he’s cultured. I think the fair thing to say about him is he’s a typical Whitecaps player. He’s got personality, he’s respectful and he’s tough. If you’re going to win things then those are the characters you need and we’re delighted we’ve got him.

“They say that 13 is an unlucky number, but today it was our lucky number because we actually picked up the guy that I wanted out of the draft in Tim.”

There was a moment of hesitation for Robinson though just before Vancouver’s first round selection. Seattle were amongst the teams looking to trade up in the pecking order and Robinson had to weight up taking a deal but perhaps at the risk of losing the main player he wanted by dropping a couple of spots. A five minute timeout was taken but in the end it was a no-brainer for the ‘Caps coach.

“As always here at the draft, you get a lot of MLS teams that come to you at the last minute or whatever and they try and get in your head before you have to make a decision. There was talks of allocation money, there was talks of moving up and down the draft table but when Tim was still on the table there was no possibility that we’d contemplate doing that. We took our time, we got everything right and we took the player that we wanted.”

So just what is it about Parker that piqued Robinson’s interest and made him his number one target? What does he bring to the Whitecaps table?

“We considered a lot of players but after interviewing Tim, he fits the mould that I am and he also fits the mould that the club is,” Robinson said. “He’s very respectful, he’s honest, he’s hard working and I feel that he is MLS ready now. I think he’s got great attributes for a defender. It was the perfect fit for me.

“I think he’s got great attributes for a defender. We’ve just lost Andy O’Brien and we’re a little bit short in that area, so I wanted to strengthen. It was a perfect fit.
We’re changing that area at the moment, with one or two players moving on. We identified Tim in the draft and we got our man, so we’re delighted with that.”

Character and attitude are clearly important, as Robinson has highlighted many times, but Parker’s on-field qualities also excite him and having scouted him over his senior year, Robinson was particularly impressed by what he showed at the combine.

“I thought he did the fundamentals very well. As a defender you’re talking about reading the game, positional sense, aerial battles, playing simple when you need to. Defenders are in there to do a job. They’re not in there to try and beat a centre forward with a little stepover or anything like that. The fundamentals he did very well and that’s what stood out.

“Not just to me but to other teams as well. After completing the draft just now I spoke to a few other teams and they’re disappointed they weren’t able to pick him up. I’m very happy with that.

“He’s tough, he’s competitive. His understanding and his reading of the game is exceptional. He plays with his brain. He’s very smart tactically and you need to be smart tactically. If you look at the top MLS defenders, which are mostly American in this league, then they’re all very smart and Tim’s definitely a smart guy.”

Parker was captain of St John’s in his Senior year and Robinson has no doubts that he could be a future leader with the Whitecaps as well.

“I do, without a doubt. One of his main qualities is that he’s an organiser. Being respectful off the pitch and being competitive on the pitch. You saw that at the combine. It’s an important factor and an important trait if you’re going to be a solid defender in Major League Soccer and he certainly brings that to the table.

“I hope he comes in in the next two weeks and tries to put his mark on because he’ll be given a fair opportunity, as will every single one of my other players, and it’s down to him to try and win a place in my team and my squad.”

While Parker may be close to being MLS ready and challenging for minutes over the course of the season, Vancouver’s other SuperDraft pick today is more a long term proposition.

Kay Banjo is another senior, who shone with UMBC as they advanced to the NCAA Final Four in December. Banjo grabbed 8 goals and 5 assists from 23 games last year, but went his last six matches without being able to add either. An exciting talent when on his game, from what we saw of him, he sometimes drifts out of games and can look a little lost.

“I’ve seen exactly the same as you,” Robinson told AFTN. “I’ve seen exceptional talent in him but I haven’t seen enough consistency. Part of my job as a coach is to try and get him more consistent and with the opportunity we’ll have with a lot of Major League Soccer games and USL games, there will be chance for him to do that, because if we can get him consistent, there’s no doubt that he’s got talent. You can’t just have talent and no consistency, so it’s a little project of ours and mine and it’s one that I’m excited for. I do see a lot of raw potential in him.”

The addition of the ‘Caps USL PRO team this coming season is a massive developmental boon, not just for the club but for the players as well. It’s something Robinson is excited about and a tool he plans to utilise fully.

“It’s very important and it’s something that we weren’t able to have last year and I think some of my younger players, not lost their way a little bit, but didn’t manage to get the competitive minutes that I wanted. It’s an important piece of the puzzle to us this year. There are players who will go down and play in the USL and I think it’s important for them that when they do go down they take their opportunity.

“If they take their opportunity then that puts them in a very good position to compete for minutes in Major League Soccer with our team. It’s a very important piece and it’s probably the next stage of the development for younger players as well because we’ve graduated a lot of our Residency guys and if they can’t crack into the first team right away then it will be important for them as well.”

What players will end up playing where is still up for grabs but Robinson promised that every player will be given a fair chance to impress and show that they deserve to be part of the MLS mix.

“That’ll be dictated in preseason. I’m giving my young players an opportunity and guys in the draft today are going to be given those opportunities and it’s down to them. If they can crack into the first team squad, then there certainly will be a position there for them. If they can’t, and I feel they need a year in the USL for their development, then that’s where they’ll be.”

The Whitecaps still have five draft selections left in next Tuesday third and fourth rounds. Having highlighted an initial list of players in the draft that interested him, are some of those options still available to him in the next two rounds and how does he see the club approaching it?

“There are, but we’ve got to be smart with our decisions when we decide to make our picks,” he told us. “I can’t totally fill up the roster with all young players. The majority are young players but we’ll have our eye on our USL roster with the next round of picks that we have, so we have to be sensible and smart with our decisions but there are certainly guys that are still very interesting to me.”

Robinson also promised a further three or four new faces still to come, which he hopes will be in place for either the start of training camp or soon after, and despite the addition of Parker in the draft and Rodriguez on Wednesday, expect a fifth centre back to join the ranks, and perhaps a familiar one at that.

One thing is for sure, it’s going to be a crowded training camp and if players want to be considered part of the MLS mix going forward, they’re going to need to stand out early and consistently.