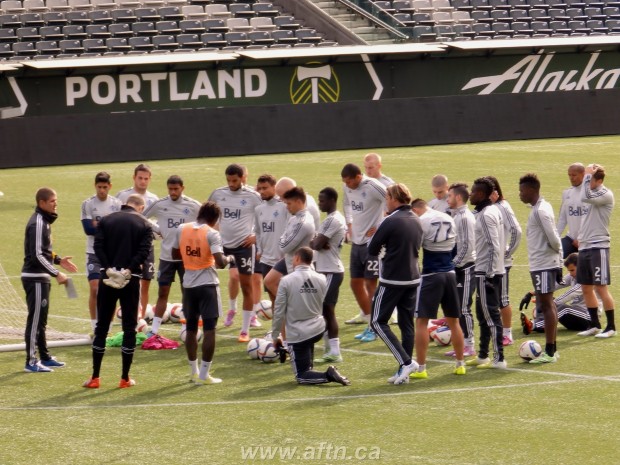 Vancouver Whitecaps finished this year’s Simple Invitational Tournament down in Portland with a lacklustre 1-1 draw versus Chicago Fire. With the tournament championship already in the bag, with victories against the hosts Portland Timbers and Norwegian side Stabæk Fotball, it gave coach Carl Robinson a chance to give some players a few extra minutes before the start of the season next Saturday.

So we thought we’d wrap up the week, and the preseason games, with a special GAB looking at what state the Whitecaps find themselves in one week until (hopefully) the start of the new MLS season.

The biggest concern every preseason is to make sure the team makes in out with no injuries and a healthy team for the long gruelling MLS season. Other then a few knocks for Mauro Rosales and Erik Hurtado, the team goes in to the season with a overall healthy team. Even Gershon Koffie has recovered nicely from his bout of flu at the beginning of the preseason.

With a completely healthy line-up it gives Robinson his full arsenal of talent for his opening day clash with TFC.

With a 4-2-3-1 formations, the Whitecaps should have a starting day XI of: Ousted; Beitashour, Waston, Kah, Harvey; Teibert, Laba; Rosales, Morales, Manneh; Rivero.

Yeah he scored two big goals for the Whitecaps in the tournament down in Portland and the coaching staff and supporters will take that all season long, but with Kah partnering up with Kendall Waston it leaves the Caps open to attacks up the middle from opposing strikers.

The problem is both centrebacks play an attacking up field style. Kah was caught out of position a few times this week, being too aggressive in his defensive play. Last season with Andy O’Brien, the team had that defensive player they knew would always be in the right place at the right time. Kah and Waston will have to learn how to play off one another to make sure that doesn’t happen too many times during the season.

Six goals in five preseason games against MLS opponents. That is not good enough to make the playoffs in the tough Western Conference this season. If Robinson wants an extra 25 goals this season they have work ahead of them.

With newly acquired striker Octavio Rivero starting this season as the lone top striker, there will be a learning curve. It may take 7-10 games for him to learn how to play the MLS style of game, how to play off defenders and adjust to the physicality of the league.

Is this the season where Darren Mattocks re-finds his scoring touch? Can he be that secondary striker that can get 7 goals this season? Will he still be here by Saturday? The Whitecaps will need secondary scoring this season to have any success. They will need these strikers to put away their chances. That has been a problem with Mattocks the past few seasons.