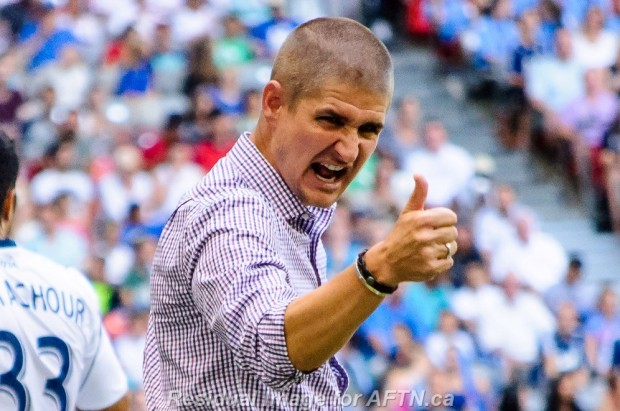 “Joe, what are you thinking?”, “Have you watched the team play lately?”, “Don’t you have a Twitter account?”. I know, this isn’t the article you expected to see, but what you cannot hide from is the truth: Carl Robinson is a victim of his own success.

Step in my time machine with me. It’s 2013, the ‘Caps have just finished 7th in the West, and the coattails of Martin Rennie would no longer darken the doorstep of BC Place. Rumours of ex-USA head coach Bob Bradley were circulating, Camilo was on the move, there was more confusion than optimism in Vancouver.

After a few weeks of speculation and angst, the quietly confident figure of Carl Robinson was presented by Bob Lenarduzzi as the man to take the Whitecaps forward. After strengthening the team with several unknown Latin American talents, we stormed to a 4-1 victory against New York Red Bulls in our first home match. The fans were on board, and the players were eager and willing to live by the club’s new found philosophy.

That season, the ‘Caps would finish inside the playoff picture after a late scare. The following season, the Whitecaps would end the season third in the Supporters’ Shield race, their best ever regular season finish.

Slowly but surely, Robbo moved the club up the ladder. His changing from a 4-4-2 to a dynamic 4-2-3-1 formation is hardly a revelation to the tactical students of the game, but his greatest achievement has been finding the players to fit the roles. Pedro Morales, Matias Laba, Kendall Waston and Cristian Techera are all Robbo era-club favourites. Counter-attacking, hardworking, and honest. Those are the philosophies that shine through on a Carl Robinson team.

Returning to reality now, the Whitecaps have not only stalled the bus, but said bus appears to be on fire. Playoff hopes are inching out of reach. The players look deflated. There is a lack of invention. The fans are disappointed, and they want blood. Are they wrong? The nature of sport as a form of entertainment is results. When a team is not getting results there has to be changes. That much is logical. But what changes? That is the million dollar question.

My AFTN fellow writer, Aaron Campbell, enquired to the fans as to the root of the problem, and they believe that the front office is responsible. Bob Lenarduzzi and company have not only failed to sign a DP to strengthen the attack, but have allowed the team to stagnate at a key time in the club’s development. Robinson is the man feeling the wrath of the fans after games, but stop and think for a second, Robbo has had this team on the upward trajectory, why has it stopped all of a sudden?

Lack of funding? Difference in expectations between Robbo and the board? Either answer points to one thing: a disconnect between the two groups of people that are responsible for running this team.

And why is Lenarduzzi so untouchable? He has hired badly two times and well once! 33% isn’t really good enough is it? If you hired me to build your shed and I built 33% of it you’d tell me to bugger off.

Questions need to be asked to the right people. Why did we sell a once highly rated DP in Octavio Rivero and gain a middle level MLS striker? Why haven’t we invested in an experienced right back? Why has the club in the MLS era repeatedly bragged about up and coming Canadian talent (Bryce Alderson, Caleb Clarke, Russell Teibert etc.), when in reality they parade them for a bit before not renewing their contract or offloading them? These are not problems in Robinson’s philosophy, but in the front office.

As Aaron pointed out, Carl Robinson is showing all the symptoms of a man who is going to have a bright future in the game. I would not be surprised if we woke up one morning and an English Championship team has snapped him up. Owen Coyle was sacked by Houston and still landed a job in the English Championship for Pete’s sake.

The harsh nature of the Vancouver supporters sporting culture means that people want changes to be made. But do not forget who has made the club what it is today.