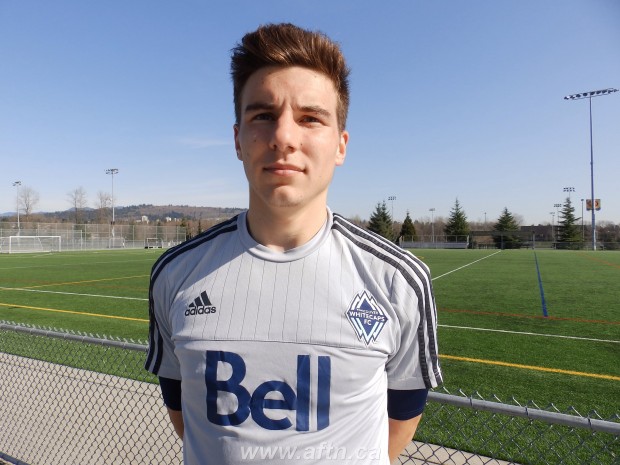 The right back position is one which has somewhat plagued the Whitecaps’ MLS team since they came into the league in 2011. The brief respite of YP Lee came after the continuing game of “right back roulette” that took place during Vancouver’s first season in Major League Soccer.

Even the Korean international struggled at times during his second season with the ‘Caps. Steven Beitashour came in to fill the role last year, albeit with a far from spectacular set of performances and he’s continued in that vein this season. Beyond those players, the depth just hasn’t been there at the position.

Surprisingly, despite the conveyor belt of top talent that the Whitecaps have produced from their Residency program, right backs haven’t featured amongst them. That looks to be finally changing with the ‘Caps new USL side.

Jackson Farmer is being transformed from solely a centreback to one that can play as the right full back as well, and to good effect, but it is his fellow Calgarian Chris Serban that is catching the eye of not just the Whitecaps, but also those involved with the Canadian national team set-up.

When we last spoke to Serban back in June, we posed the question was he “the right back prospect the Whitecaps have been looking for?”. It would appear that the answer could be yes.

An obvious talent, the next stage of his development was always going to be key and Serban chose to head down the college route with UBC Thunderbirds, before returning to the ‘Caps fold as one of the first signings on the new WFC2 roster.

“It’s very exciting, for sure,” Serban told AFTN when we caught up with him at WFC2 training recently. “I know the Whitecaps are an excellent organisation and with this USL team it provides me with an extra opportunity to develop and improve my game and hopefully raise my game to try and get to the MLS level. So I’m definitely excited to sign for USL and I’m looking forward to this season.”

Serban is certainly an exciting prospect and one to keep an eye on this coming season and he could be one of the breakout guys. Moving up from the youth ranks is always a defining time for young players as they face an older and often more physical environment. You can never be 100% certain just who will make it, but Serban has already acquitted himself well at PDL (U23) and college level.

The full back impressed during his freshman year at UBC, making 16 appearances in a very stingy Thunderbirds defence. It earned him CIS “Rookie of the Year” honours and put him firmly on the radar for the Canadian national team.

UBC coach Mike Mosher told AFTN last year that Serban had been “absolutely terrific” since coming in to the team and the program and he hopes to work with him for many years to come, which we’ll come to later. But despite earning all the plaudits, Serban admits it was an adjustment moving up to that next level.

“It was challenging,” Serban told us. “It’s definitely more aggressive and I had to step up my physicality. That’s been pretty much the biggest difference I’ve seen, plus attention to detail. Always being switched on. The speed of play is really quick.”

Part of that challenge was adjusting to a new role, for while Serban had been playing right back for the Whitecaps Residency, he slotted into the left back position at UBC. Different, but he feels comfortable playing in either of the full back positions.

And it certainly didn’t look like it made any difference out on the pitch. Having that versatility is a useful string to have to his bow, as the likes of Russell Teibert has shown with the Whitecaps first team these past couple of seasons. The more positions you can play, the more it bodes well for your involvement with the team.

“It definitely does,” Serban agreed. “Because you never know with injuries and what we’ll have during the game with substitutions. If the coach needs me to go to the left side or the right side, I don’t mind. I’ll play anywhere that I need to be. I’m just happy to be on the field.”

The Whitecaps had been monitoring Serban’s progress closely at UBC during his rookie season, with the young defender emailing reports after every game around how he did, and where and how much he’d played.

The ‘Caps clearly liked what they saw and with their new USL team finally sorted, Serban became one of the first six players added to the inaugural WFC2 roster.

Leaving college early to head to the pro ranks is always a tough decision for a young player, especially when you look at the numbers that then go on to make it in the game. In Serban’s case, however, it was a decision made a lot easier not only by the fact that he has history with the club, but because he’s not actually leaving UBC or the Thunderbirds to join WFC2.

“It wasn’t a hard decision because I’d been with the Residency Whitecaps,” Serban told us. “Now to move on to the next stage of the Whitecaps is definitely a great opportunity for me. At the same time, I can still continue playing for UBC once the USL season is done because CIS eligibility is not like NCAA.”

It’s the perfect arrangement and one which could see a number of top young Canadian players in the future shunning the American collegiate system to stay within the CIS one in Canada. They then have the best of both worlds as they try and make a go of it in the pro ranks, while getting an education at the same time.

That’s not to say that it will be easy to juggle school with travelling all over North America. Serban is still in his first year at UBC, studying business. He’ll treat the rest of this year as a gauge as to how he’ll progress with that balance going forward.

“It’s good because I can continue slowly with my degree and continue working hard with my soccer and hopefully making it one day to MLS.”

That work ethic and desire to continue to learn and develop has impressed the Whitecaps, but it also was part of the reason that Rob Gale decided to bring Serban into the Canadian U20 set-up.

Serban was called into the Canada camp for three friendlies in November, coming on as a sub against England before starting against Russia and the US in the right back position. Gale liked what he saw and Serban was not only named in Canada’s squad for the FIFA U20 World Cup qualifiers in Jamaica in January, he started and played the full 90 minutes in all five games.

“He’s done very very well with us,” Gale said of Serban on a recent conference call with media. “He’s had the experience in Europe. He’s a talented lad, he’s a good one v one defender and he’s proved himself that he can handle the international matches.

“As a full back, first and foremost, you have to be a good one v one defender and I think he’s got that. He’s a good game player. He raises himself to the occasion. He can also use the ball very well. He seems level headed. Nothing seems to phase him on or off of the field, which I like. He’s composed on the ball. He’s good quality.”

While Canada may like to go with players from Unattached FC and the odd NCAA player like Cyle Larin, you don’t often see CIS players getting a look, and Serban admits that the initial call and inclusion in the Canadian squad came as something of a surprise.

“It definitely did a little,” Serban admitted. “I got an email asking me to sign some Canadian Association form. I wasn’t too sure what this all meant but when they called me for my first camp I knew I had to work hard and take the opportunity given, because it was short and not too long before the World Cup qualifying. I was definitely surprised but I tried to take the opportunity as best as I could.”

As great an opportunity as it was, the qualifying campaign ended poorly as we all sadly know.

“The experience was great,” Serban told us. “Getting to work with all those great coaches. Rob Gale, Ante Jazic and Paul Stalteri. They had a whole staff that prepared us really well for every game and they put a lot of detail in to it. The teams we played against were all fantastic teams, so it was definitely a challenge. We knew we had to step our game up. Obviously it didn’t work out too well but it was a great experience. It’s just too bad that we couldn’t qualify.”

As disappointing as it was, and still it, Serban and the rest of the players will learn from it and hopefully he’s starting off on a road to successes with the Whitecaps.

Serban’s had an interesting footballing journey. He moved to Calgary with his family from Romania at the age of two and by the age of 12 was already shining at provincial youth level in Alberta. The European connection helped him secure several training stints in Spain, Germany and Romania and a lot of what he learned there has helped shape his game and work ethic today.

“It definitely helped improve my game,” Serban told us about what those European experiences taught and meant to him. “What I noticed there compared to when I was training here when I was younger, was that over there, every session they go 100% working hard. When I was younger here, the training sessions were taking it a little easier and then in games going flat out.

But after all his travels, Vancouver is now Serban’s new home, albeit one with several familiar faces.

Playing his youth soccer in Calgary with the Chinooks, Serban was a teammate with Marco Carducci and regularly played against Jackson Farmer, Mitch Piraux and Sam Adekugbe. Having those guys around him again in WFC2 (and previously with the Residency) and the Canadian team has helped him settle in and it’s a like a home from home for all the guys. All of which will help the team in the long run.

“It feels great,” Serban said. “When I was younger I played with Carducci on the same team and against Mitch, Jackson, Sam as well. It’s just great to come in here and know all these players. They definitely helped me feel welcome right away. It just felt that I meshed in with the group quicker.”

It’s the kind of chemistry that will give WFC2 a little edge over some of the more experienced and older teams at times this season. It’s quite the Calgary connection and you wouldn’t bet against seeing all of them again on the Whitecaps MLS squad in the future either.