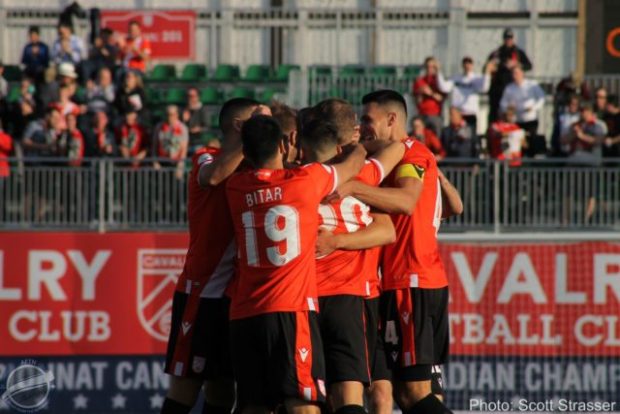 Canadian Premier League leaders Cavalry FC stamped their ticket to face the Vancouver Whitecaps in the third round of the 2019 Canadian Championship with a 2-1 home victory over Forge FC (3-2 on aggregate) on June 11.

A week after the first leg ended in fireworks on June 4 in Hamilton, where the two teams erupted into a shoving match following the following whistle, the return fixture at Spruce Meadows was less heated, but still had its moments of intrigue and spice.

Forge outplayed Cavalry for most of the first half, and took the lead in the 20th minute. Kwame Awuah got to the bye-line on the right side of the pitch and laid off a pass for Kyle Becker. Forge’s captain shifted his feet so he could one-time a left-footed shot past Cavalry’s goalkeeper, Niko Giantsopoulos.

After a sluggish start that saw Cavalry continuously turn the ball over, the hosts woke up following Forge’s go-ahead goal. Striker Dominique Malonga tied it up for Cavalry in the 41st minute, when he leapt high to head home an in-swinging cross from Jose Escalante at the back post.

The two teams entered the half-time break level at 1-1.

The visitors’ fatigue was evident as the second half carried on. Whether it was due to the travel, the high grass on the Spruce Meadows pitch or the perceived difference in altitude, Forge’s players struggled to retain their strong first-half performance.

Camargo’s game-winning goal came with just over half an hour left. In a play that looked similar to Forge’s goal in the first half, Cavalry winger Nico Pasquotti got to the bye-line on the right side of the pitch before laying a ball off for Camargo to stab past ‘keeper Triston Henry’s near post from close range. The game-winning tally marked Camargo’s first goal of the season.

A major talking point after the first leg was the rivalry that has developed between Cavalry and Forge – the two leading teams in the CPL. Though the fierce nature of the end of the match in Hamilton wasn’t on display as much as perhaps was expected in Calgary, evidence of the teams’ competitiveness – and growing disdain for each other – came in the 68th minute, when Forge player Daniel Krutzen earned the third yellow card of the match for a harsh collision with Cavalry wing-back Dean Northover. Krutzen clattered Northover’s upper body with his shoulder when the two players ran at each other at full speed, and earned a spot in the referee’s book as a result.

In a semi-reversal of what happened in the first leg, Forge had a penalty shout late in stoppage time, when Cavalry captain Mason Trafford slid in the 18-yard-box in an attempt to clear the ball away from Klaidi Cela. Trafford didn’t actually hit the ball with his tackle, but Cela’s eagerness to go to ground when he felt Trafford’s contact didn’t sway the referee, who had a perfect view of the challenge.

Cavalry can now look forward to a two-leg battle with a MLS side, but they won’t have long to rest on their laurels – they’re heading north on the Queen Elizabeth II Highway on Saturday for the second CPL edition of the Al Classico derby with FC Edmonton. The last derby resulted in a 1-0 win for Cavalry at Spruce Meadows.

On his team’s resilience:

“We’ve got it in buckets, haven’t we? That didn’t look like us in the first 20 minutes. We were slow, sluggish and on the back foot. We don’t play like that. I think the goal woke us up. Forge are a good team. If they don’t knock us out, we’re still in the fight. If you give us opportunities, you’ll see we’re ruthless.

“The boys, it just takes a few stern comments from me and they gee themselves back up. There’s a spirit in this group of ‘never say die.’

On when the momentum switched in Cavalry’s favour:

Malonga hit an absolute rocket. Credit to their keeper. I don’t know if he had Go-Go-Gadget arms or whatever, but he tipped it over.

On the upcoming cup tie against the Whitecaps:

“I’m concentrating on Edmonton, actually. We’re a one-day, one-game-at-a-time type of team. That’s why we keep doing what we do. We don’t get too high on the celebrations after we leave the locker room – we just focus on the next opponent, and for us, that’s Edmonton.”

“It will be great [to face Vancouver], because Mason Trafford played there, [coach] Martin Nash played there, Marco Carducci has been through there, so of course, we’ll look forward to that.”

On the game, and Cavalry’s ability to come back from 1-0 down:

“The fans and this atmosphere here at Spruce Meadows, it’s just a special place to play. The players, we feel that.

“Soccer is a funny game and it reveals everything – you have to go out there with the right mentality. It took us a bit to wake up, but the guys we have on this team are fighters and we’re coming all-out until the 95th minute if we need to. That’s what you saw tonight, and we grinded it out.”

On playing the Whitecaps in the next round:

“It’s exciting, but it’s one game at a time. That might have gotten to us a bit in the first 20 minutes – maybe the occasion, and knowing what lies on the other side of this game, if we got through.

“We’re a new club, [but] it feels like we’ve been around for a while. We’re just excited to go play in Edmonton on Saturday, and obviously Vancouver when it comes. Hopefully, it will be an unbelievable atmosphere at Spruce Meadows with a MLS team here.”

On his goal and the team’s performance:

“I’m going to take it until they take it away from me, as I think I got a touch. Nico Pasqoutti did so well to get that ball across the line, and I was there. We talk every day about making those first-post runs.

“This team has so much character. We come back from a 1-0 deficit to take this against a good Forge side.”

On the team’s improved second-half performance:

“We knew we didn’t play our best in the first half, and we knew that was all they were going to give us. We just had so much confidence going into the second half, because we knew we could play better. There was no game plan or anything – it was all about character. We know what we have to do every time we go on the field, and it was just we weren’t executing in the first half.”