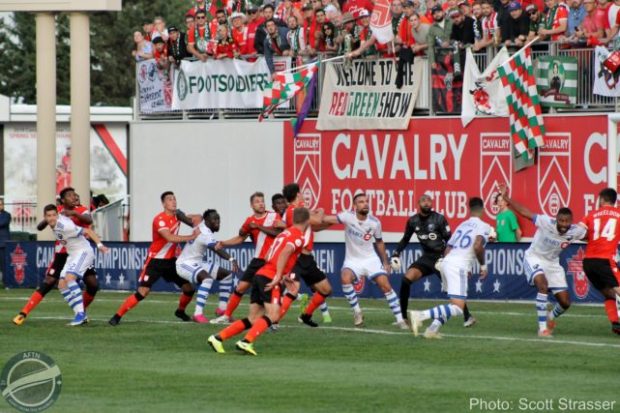 The lights went out on Cavalry FC’s exciting inaugural run in the 2019 Canadian Championship on Aug. 14, as the Calgary-based team fell 1-0 (3-1 on aggregate) to the visiting Montreal Impact at Spruce Meadows.

Despite edging the MLS side in possession (60-40) and chances created (18-9), Cavalry failed to overturn a two-goal deficit produced by an early Montreal goal that came off a corner kick from Anthony Jackson-Hamel.

“I’m immensely proud of this group of players and this football club,” said Cavalry FC head coach/general manager Tommy Wheeldon Jr. after the match. “We talked about it in the locker room – that we were going to give everything we have, and we left with exactly that. We gave everything we had, and it was a tale of a set play.” 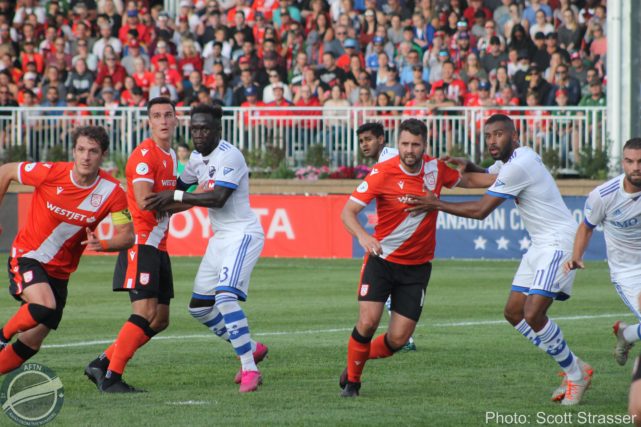 Cavalry generated 18 shots throughout the second leg, most of which came off set pieces.

Having escaped the first leg of the cup semi-final with a crucial away goal, Cavalry had it all to play for in the return fixture at home, as a 1-0 victory would have seen the team advance to the final against Toronto FC.

Montreal had a few key absentees from their lineup, including the injured Ignacio Piatti – the Argentine striker who scored both goals in the Impact’s 2-1 victory on Aug. 7. Central midfielder Samuel Piette also did not play, while new DP signing Bojan Krkic was on the bench.

Energized by a sold-out crowd of 5,633 fans, the Canadian Premier League’s spring season champs came out with high intensity, but they quickly found themselves down a goal when Jackson-Hamel headed a Montreal cross from a corner kick past Cavalry keeper Marco Carducci in the 11th minute. Suddenly, Cavalry trailed 3-1 on aggregate, and needed two goals to stay in the tie.

“When you score an away goal in a cup game, it’s always very important,” said Montreal head coach Remi Garde. “We knew we’d probably have to score at least one coming here. We knew because of the field and the way you can’t play here, we wouldn’t have time under pressure.”

If anything, the early setback seemed to spur the Cavs forward. The home team piled on the pressure as the minutes ticked towards halftime, pumping multiple balls into the Impact’s 18-yard-box through a combination of corner kicks, free kicks and long throw-ins from winger Nico Pasquotti. 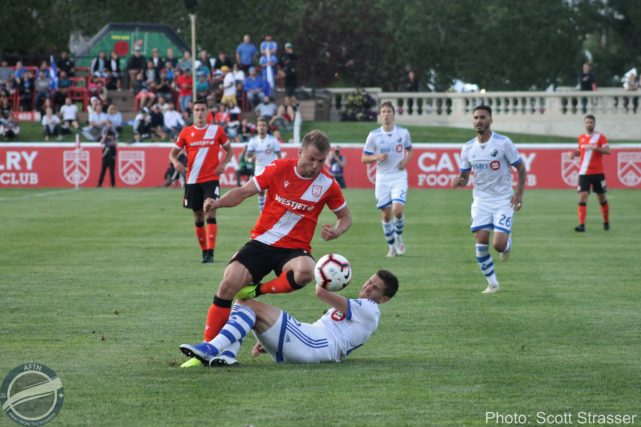 Julian Büscher fights for the ball.

Cavalry edged Montreal in terms of possession in the first half, with 57 per cent of the ball, along with nine shots compared to four from the Impact and five corners compared to the Impact’s two.

“We did everything but score, really,” said Cavalry center back Mason Trafford. “We were ready, eager and hungry. We had a lot of belief that we were going to turn the tie and advance.”

But positive statistics don’t necessarily win football matches, and the Impact back-line’s ability to continually defend the Cavalry crosses that were fired into their box should be commended.

“I’d like to congratulate my team because we fought as a team for every ball,” Garde said. “We knew it was going to be that kind of game. I think if we could do that every game, in terms of our togetherness, we could be a much stronger team.”

Despite a flurry of activity towards the end of the first half, not much happened in the early stages of the restart. Cavalry continued to play fairly direct and put its attacking emphasis on set pieces.

“It was about 12 corner kicks and probably 12 long throw ins and free kicks from around the halfway line,” Wheeldon Jr. said. “We threw everything at it. It was a game of inches.”

With a 7:30 p.m. kickoff, the second half was marred by darkening conditions at Spruce Meadows, where only a single floodlight was erected. 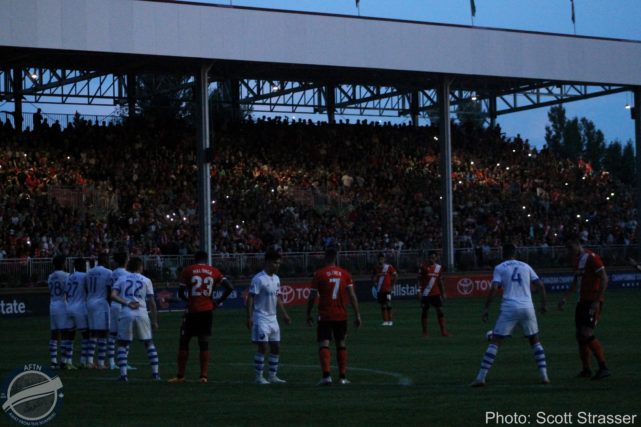 The playing conditions were difficult for the players to handle in the final 30 minutes, as it started to get darker and darker at Spruce Meadows, with just one floodlight erected.

As darkness continued to envelop the pitch, Cavalry continued to fight for the equalizer. Wheeldon Jr. brought in Oliver Minatel and later, new signing 16-year-old Aribim Pepple, to stimulate the home team’s attack.

Pepple, playing in just his second professional game after a cameo appearance against HFX Wanderers in the CPL on the weekend, got involved right away, when he got his head on the end of one of Cavalry’s many corner kicks. However, he wasn’t able to direct the ball goal-ward and it went harmlessly over the line for a Montreal goal kick.

“Isn’t he exciting?” Wheeldon Jr. said of the 16-year-old, who scored five goals for Foothills FC in the USL2 this summer. “I think this time last year, he was preparing for youth soccer provincials, and today, he walks out in front of 6,000 to play against MLS opposition.

“This is what [the CPL] is about – we’re trying to grow these players and give them the moments to shine. I’m super proud of him and excited to work with him.”

The most gasp-worthy moment of the match came in stoppage time, when striker Dominique Malonga attempted a bicycle kick from a corner. The 30-year-old Congolese international did well to connect with the overhead kick, and his shot fell to center back Jonathon Wheeldon, who forced some last-second heroics from ‘keeper Clement Diop on his goal-line.

In the end, Cavalry’s players and coaching staff can hold their heads high, having made it all the way to the final four of the Canadian Championship in their first go of it.

“We’ve played four games against MLS competition – more established clubs – and they’ve been one-goal games,” Wheeldon Jr. said. “That shows the strength we have, and we’re less than 100 days old. If you give me another 100 days, you’ll see where we’re at.” 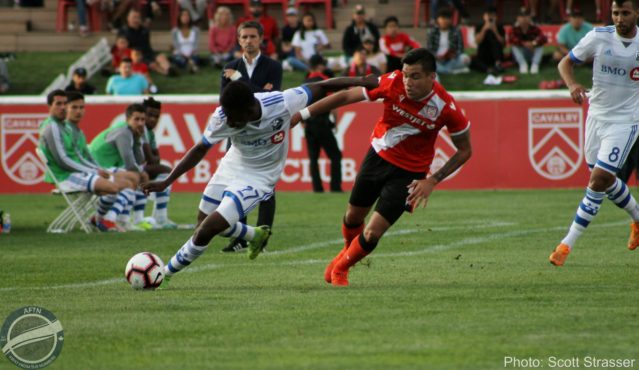 Jose Escalante fights for the ball along the touchline.