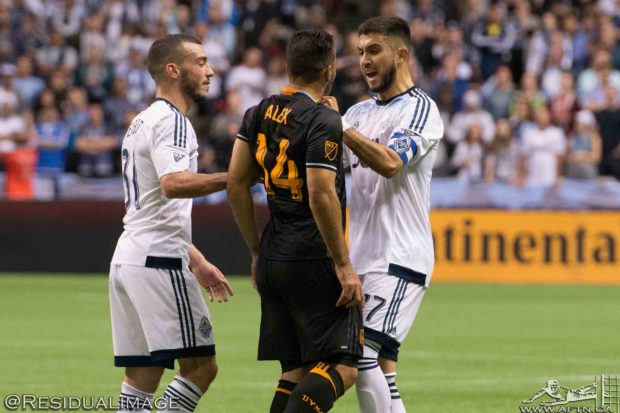 The ‘Caps have had a bit of a break since the game against Orlando last week, unless you count the friendly against Crystal Palace. To be fair, most of the starters were not on the field for that long so they should all be raring to go. If the team wants to bolster their playoff position in a tight Western Conference, now would be the time to get some points towards it against a struggling Dynamo side.

Houston are in the basement of the West and, even with the heat and their poor record in Texas, Vancouver will hope to pick up some points at the start of a four game (three in MLS) road stretch. Houston has not had a good run during this summer, mostly picking up draws, but they have won four games this season at home and players will be hoping to impress their interim coach.

Vancouver have a new forward, Fabian Espindola. The Argentine has had a good MLS scoring record but has seen his production drop this year. Will the necessary paperwork and Canadian work permit be through in time for the ‘Caps to use their new acquisition? With the amount of chances still going begging, he’s a player whose experience and track record is much needed in a tricky stadium to visit.

David Ousted didn’t feature in Tuesday’s friendly and will start in Houston. In the game against Orlando he made some magnificent saves, keeping the ‘Caps in the game and saving the draw.

Recent matches have a lot of teams getting the better of Houston in 1-0 games. With this in mind, it would be good to set up a bit more defensively and use our set piece plays to the greatest effect.

Although Jordan Smith has been getting a run, and Fraser Aird seems to be back to fitness, I would like to see Tim Parker in the right fullback spot and David Edgar slotting in beside Kendall Waston in the centre of defence. With Edgar not being up to full match fitness, and concerns about how he would fare in the Houston heat in such conditions, the Canadian international hasn’t travelled to Texas, so it’s a toss up between Smith and Aird for the start. Smith seems likely to get the start. He didn’t feature on Tuesday and is more used to those kind of playing conditions.

Vancouver need a group that will be able to absorb the physical presence that the Houston forwards have. Although goal scoring is important, it has been the defence that has been failing this year. It will be interesting to see what will be happening during the summer and into playoff hunting season. If the mistakes continue, it will be hard to make the postseason.

Matias Laba and Andrew Jacobson should be starting in the defensive midfield positions. They will bring a great defensive solidity and passing. Jacobson likes to push the ball forward more, which will be needed.

Christian Bolanos, Nicolas Mezquida and Pedro Morales should be the attacking midfield trio. They can make some nice interchanging runs and can all make great passes and hold onto the ball well. Mezquida is really the only one of them that can defend well, but Morales has been making progress in that department. However, having Bolanos and Smith on one side is a bit too dangerous defensively for an away game that we can win.

Up top leading the spear should be Masato Kudo once again. He has come back and shown what a striker does: get into good spaces, anticipate the play, win second balls, make runs, and score! Hopefully Kudo can keep up the feelgood narrative of scoring after having such a serious injury.

Houston has been missing DaMarcus Beasley of late and will also be missing first choice goalkeeper Tyler Deric for this one. After former head coach Owen Coyle departed, Houston have been much more organised defensively, even with these absences. On the flip side though, Beasley is great moving things forward, and they have had a somewhat lack of support when trying to do that in recent matches.

That makes me think this game looks like it has a draw written all over it. If the Whitecaps can limit the Dynamo forwards, and then steal a goal with a set piece, that may prove to be their best opportunity for the win.

Do any of the recent signings get a start or come in off the bench?

Can Masato Kudo keep putting them in?

Can the Whitecaps play what has become a rarity recently – a good defensive game?

Will Bruin – He has good hold up play and can finish well. If the Dynamo get any chances and he is on his game, he could prove a handful for a shaky Whitecaps defence.