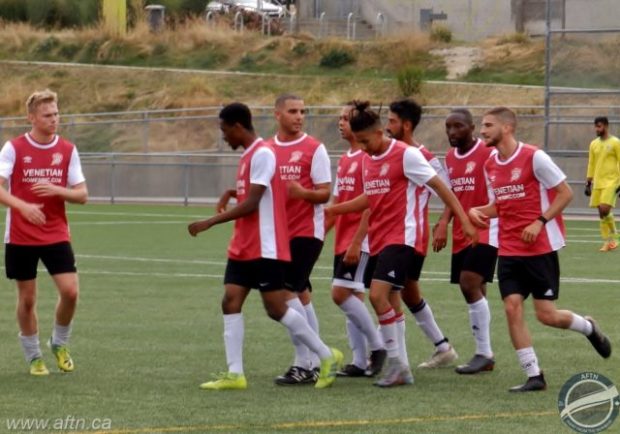 Empire Fields was the venue on Saturday for the annual Premier Division showcase, with all six opening day matches taking place there over the afternoon. And the new league season got off to an entertaining start with some surprises, some great goals, and some early statements made.

The action kicked off at noon with a pair of matches featuring the two promoted teams.

Last year’s VMSL Imperial Cup winners West Van FC got their new campaign off to a winning start, but were made to work hard for the three points by last season’s Division 1 champions Burnaby Selects White Eagles, needing a stoppage time winner to come away with a 2-1 victory.

Shane Howard fired West Van into an early first half lead, burying a free kick, only for Matlash Vladyslav to tie things up on the counter later in the half. Despite the Amblesiders dominating play, that was how things stayed until deep into stoppage time until Dylan Bams fired home the winner for three big points for West Van.

SFC Pegasus were the winners in the other early match, seeing off the second of the division’s promoted sides, ICSF Columbus, 2-0 thanks to a goal in the first 15 minutes from Paul Bahia and one in the last 15 from former WFC2 player Sahil Sandhu.

The 2pm matches saw the first draw of the new season and the first shock. 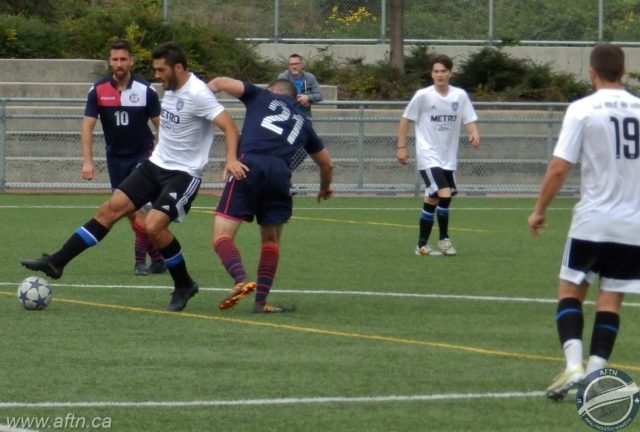 Club Inter EDC Burnaby and Coquitlam Metro Ford Wolves played out a 0-0 draw with the closest either side came to scoring being Carlo Basso’s spectacular overhead kick that flew into the net but the linesman’s flag was up for offside and the referee chalked it off.

The main other talking point from the match was the return of striker Mohammed Habib to Inter, back from Europe, which should provide them with some much needed firepower as the season goes on if he sticks around.

While that game was playing out to a scoreless conclusion, all the drama was taking place on the south pitch as BC Provincial champs CCB LFC United fell to a shock 2-1 defeat to the newly revamped Guildford FC FASA, with in a very entertaining match that was settled through a stoppage time screamer.

Guildford FC’s Premier spot was acquired over the summer by Vancouver based Field Art Soccer Academy, keeping the Guildford name, for now at least. Not much was really known about how strong this team would be heading into the season or who would be playing for them.

The answer to the latter appears to be mostly a mixture of players from the FASA academy and some local college players, but they’ve also made some signings with international experience as well.

It’s too early to have an answer to the first question, but on the initial showing, this is a team that should not be taken lightly this season. 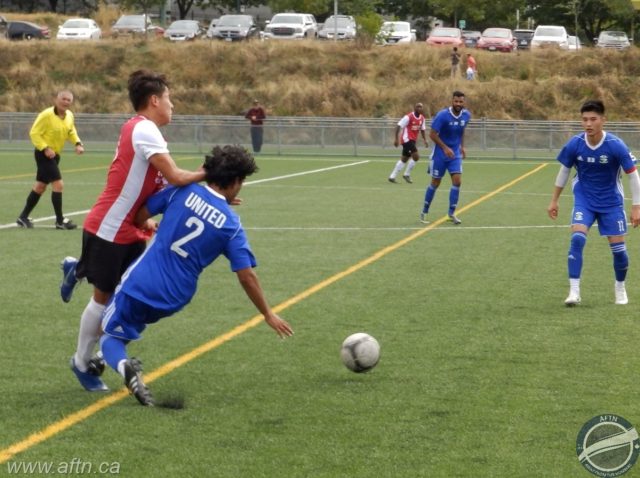 Perhaps CCB did, as they rested a number of key starters ahead of the upcoming nationals. The feeling was that they would still be strong enough to overcome whatever team FASA put out. That proved not to be the case and FASA were very worthy winners in this one.

By the time FASA took the lead late in the first half through Brandon Bangambee they could easily have had a couple of goals to their name if they had been able to take their chances.

CCB got a clear kick up the ass at half time and came out all guns blazing as they tried to get back into it, but found the FASA defence tough to break down. Eventually going to three at the back and pushing striker-turned-centreback Elie Gindo back into his old forward’s role, the Surrey side found the equaliser in controversial fashion on the hour mark.

Gindo ran onto a through ball but the linesman’s flag immediately went up. The FASA players stopped (as did I in terms of recording!) only for the referee to wave play on and Gindo waltzed in on goal, took the ball around the keeper, and fired home the equaliser.

FASA protested but to no avail and you felt that their brave resistance would now be over and CCB would go on to win the game. But full credit again to FASA, they regrouped and looked dangerous on the counter as CCB pushed for the winner.

It looked like the game was going to end in a creditable draw for FASA in their Premier debut but they had other ideas and with the game three minutes into stoppage time Kalonzo Kabongo fired off an unstoppable 35-yard dipper that beat the CCB keeper all ends up and sparked wild FASA celebrations as they secured what could be a huge three points come the end of the season. Already a contender for the VMSL goal of the season and you can see it, and some other highlights from the match, in the video below.

FASA were pegged by many to be relegation candidates but who knows now? All we do know is that every point is crucial in the long campaign and they’ve got off to the perfect start.

It wasn’t just the BC Provincial champs that were to find themselves out of luck on the opening day, defending VMSL Premier champs Croatia SC also got off to a losing start in the quest to defend their title.

Croatia won their first ever VMSL Premier championship in dramatic fashion last season, with Mark Malamura’s stoppage time winner over Rino’s Tigers in their last match of the campaign proving to be the difference maker in pipping CCB to the title.

Rino’s had been in with a chance at the title themselves heading in to that last match, and they got the opportunity for immediate revenge as they kicked off the new campaign against Croatia in one of the last pair of matches on opening day, and one of the most eagerly anticipated from the afternoon. 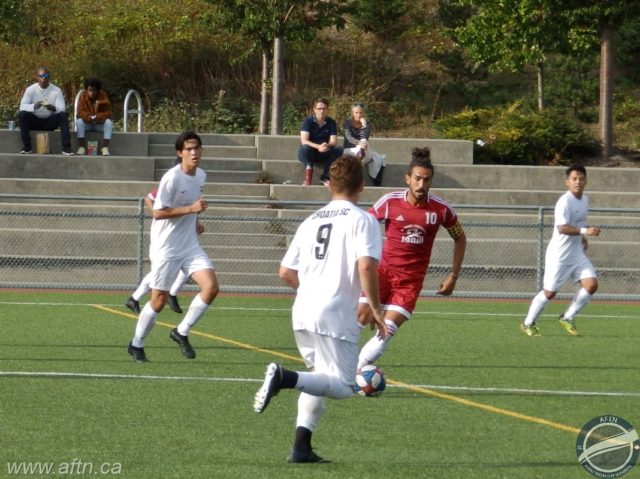 Rino’s have lost a number of key players to CPL side Pacific FC and VMSL rivals CCB. One of the burning questions heading into the new season would be how they would go about replacing them. One player particularly under the spotlight was Iranian striker Farivar Torabi.

Torabi was the leading scorer in VMSL Division 1 last season, hitting 20 goals with Burnaby Metro Athletic. He also played a pivotal role in Rino’s summer offshoot, FC Tigers Vancouver, winning the PCSL championship this summer, hitting all four of their goals in the final against Victoria Highlanders Reserves. That performance earned him the chance to make the move up to the Premier with Rino’s this season and he had a choice to make – stay playing with his friends or move up to the top flight.

Few knew what the outcome of that decision was until Saturday when he took to the pitch in Rino’s colours and he was the difference maker in this one against Croatia.

Torabi was a constant nuisance to the champions’ defence, but was unable to find the breakthrough as both teams headed into half time scoreless after a fairly lacklustre first 45 minutes.

It was a far better second half, with Rino’s looking the sharper side. They came close on a couple of occasions but finally got their breakthrough when Torabi made room to fire home the opener from six yards out. He had a chance to double his and the Tigers’ tally a few minutes later but his spot kick was saved and Rino’s had to settle for the 1-0 win.

You can see our highlights video from the match below.

A very satisfying result for Rino’s and it will be interesting now to see how they go on and build from it, especially with another tasty match coming up against CCB this Friday.

Gurjot Lehal shot Rovers Tigers into a first half lead firing a corner in off the underside of the bar. Cam Hundal put the game to bed in the second half for the Surrey side for a fairly comfortable 2-0 win in the end. 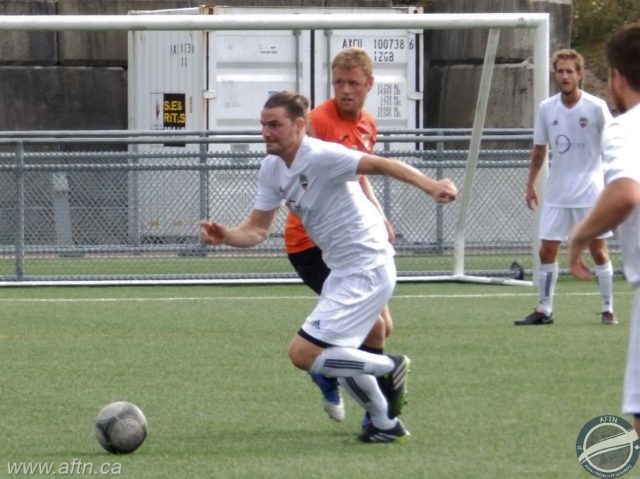 Great stuff to kick off the new season and we’re looking forward to all that is still to come.

You can find some more of our photos from the last four matches on Saturday over on our Flickr account.