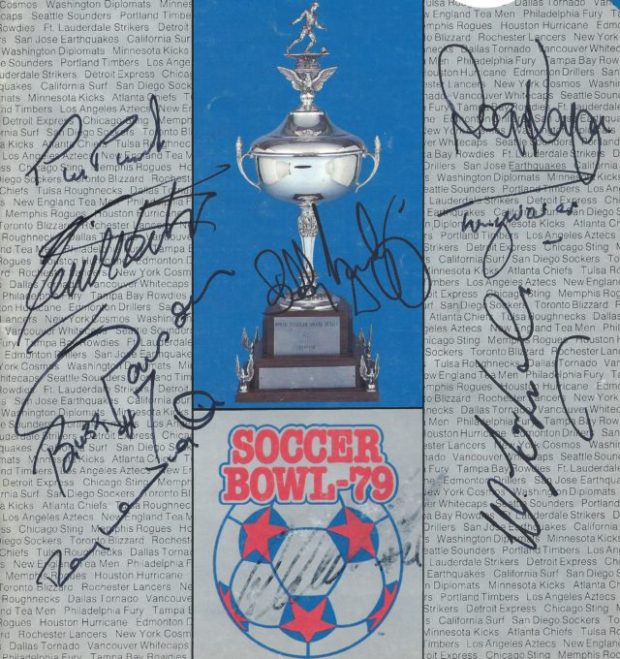 Throughout the season we’ve been recapping Vancouver Whitecaps’ 1979 NASL Soccer Bowl winning season with the help of matchday programs, photographs, and more, bringing you all the highs, all the lows, and the all the wonder of their famous final victory, with a splattering of 1979 nostalgia and some interviews thrown in as well.

I hope you’ve enjoyed reading them as much as I’ve enjoyed putting it all together. But now, nearly six months down the road it’s the day we’ve all been waiting for – September 8th, Soccer Bowl day, with only the Tampa Bay Rowdies standing in the ‘Caps way to making history.

Giants Stadium in East Rutherford, New Jersey was the setting for what was to become the pinnacle of Vancouver Whitecaps history and 50,699 fans were there to witness it, including a large number who had made the tip east from Vancouver.

It was a stadium with happy memories for the Whitecaps this season. They’d beaten the New York Cosmos there 4-2 in a league match in July and had just beaten them on September 1st to win the National Conference Championship and clinch a place in their first, and what was to prove to be their only, Soccer Bowl.

Many had thought that the ‘Caps would just stay in New York to prepare for the final but head coach Tony Waiters thought that was a bad idea all round. He felt the Big Apple and all the hullaballoo in the build up to the final would prove to be too much of a distraction. With days to kill before the match, away from their families, and with the drinking culture in the squad and the game at that time, he was definitely correct!

The ‘Caps flew back to Vancouver on the Sunday night after the Cosmos game, taking Monday off as a reward and a day to recover from their exertions. But they were straight back at it on the Tuesday, training at Empire before the majority of the team flew to New York again on the Wednesday.

Waiters, Alan Ball, Kevin Hector, and Phil Parkes flew out ahead of the rest of the squad after the Tuesday training session for mandatory media commitments including the Commissioner’s Press Conference. Their wives made the trip with them and it was a nice way for them to prepare.

But not all of the preparations were as pleasing. The Whitecaps players weren’t happy with the bonuses on offer for making and potentially winning the final. This seemed to be a common trend in the North American game with other teams over the years going through the same thing. Discontent among the squad was rising before a now legendary talk from Alan Ball helped them see sense. The experienced World Cup winner told them that they may never play in a cup final again and they should all make the most of the opportunity provided to them. They listened and it had the desired effect.

Gameday came and the stadium was very much full of anti-Whitecaps sentiment. The Cosmos had won the last two Soccer Bowls and their fans expected them to be in the final again, especially on home turf. As such the crowd was full of native New Yorkers who had already bought their tickets and they weren’t going to be cheering on the team that had knocked their heroes out just one week earlier.

Phil Parkes led the ‘Caps out as the boos rained down. A couple of hours later it would be the Whitecaps players who were knocking down the booze, celebrating a famous victory.

There were a lot of fans who made the trip through from Vancouver to cheer their boys on, as well as those from Tampa Bay, and it was a great atmosphere for a final. One the ‘Caps players rose to.

It was a cagey start from both team but the action exploded in the 13th minute when Trevor Whymark fired the Whitecaps ahead. The striker picked the ball up just inside the Tampa Bay half, turned him man brilliantly, before powering towards goal and firing a low one past the Rowdies Canadian keeper Željko Bilecki from the edge of the box.

Watch as Trevor Whymark opens the scoring in #SoccerBowl79 with a wonderful solo effort.#ItTakesAVillage🌊 | #VWFC pic.twitter.com/rfcPOzsQSV

It was almost dreamland for the ‘Caps two minutes later when they had two chances to double their lead but were denied by the woodwork when Whymark’s 25 yard free kick off crashed off the right post and Hector’s shot from the rebound cannoned off the bar.

Agony for Vancouver and a huge let off for Tampa Bay, who took impetus from it to tie things up in the 23rd minute when Peter Anderson set up Jan Van Der Veen, who left the Whitecaps defence in his wake to grab the equaliser.

The game had suddenly swung in the Rowdies favour and they had a goal disallowed for offside four minutes later. As the half ticked down the ‘Caps then had a goal ruled out with five minutes remaining. Whymark looked to have brilliantly headed home a Buzz Parsons cross but Carl Valentine was penalised for a foul on the keeper as the cross came in, despite being in front of Bilecki and the goalie seeming to bowl into him. Where’s VAR when you need it?!

What say you? Goal or no goal?

The ‘Caps came out strong in the second half, controlling the game, and finally getting the reward their play deserved when Whymark did get his second of the game on the hour mark.

Ball got the ball 25 yards out and played it inside to Whymark on the edge of the box. The striker’s shot took a deflection on it’s way to goal, enough to take it past Bilecki and into the net.

2-1 Whitecaps and it was a lead they were not to give up.

It was a nervy 30 minutes, with Tampa Bay coming close a couple of times in the dying minutes but Parkes was in outstanding form to keep them out.

The final whistle came and the Whitecaps players and supporters went wild. The trophy presentation was made and the ‘Caps players celebrated in front of their travelling supporters, with Waiters joining them in the stands with the Soccer Bowl trophy at one point.

Celebrations back home in Vancouver went long into the night and carried on into the next day when the team arrived back with the trophy. Thousands greeted the Whitecaps at the airport on the Monday and followed them downtown for the open top parade through the streets of Vancouver that has become the stuff of legend.

Over 100,000 were in attendance, many more than was expected and showing just what this trophy meant for the team’s supporters and the city as a whole. Scenes Vancouver hasn’t seen the likes of since, and who knows, maybe never will again.

It was a season to remember and it will always have a place in Vancouver and Canadian sporting history.

Thanks for being on this journey with us. You can catch up with all of our “Season To Remember” articles from the Whitecaps 1979 NASL Soccer Bowl winning season HERE.

And you want to re-live the game in full. You can, on You Tube. Enjoy!