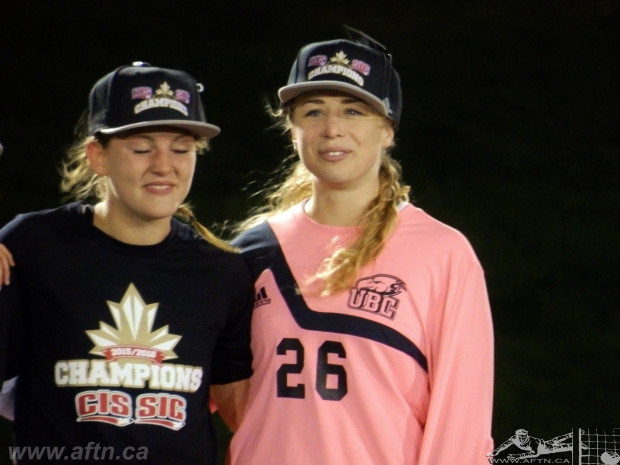 The Thunderbirds put together a squad that gave up only eight goals over the regular Canada West season and conceded just once in six playoffs games. An impressive year for the team and a personal triumph for goalkeeper Olivia de Goede.

De Goede’s story wouldn’t look out of place on the big screen.

The talented keeper was highly rated coming out of high school and spent four years at the University of Victoria Vikes. She left with a BSc Honours degree in Biology, but having seen no minutes of Canada West action on the pitch as a result of having two older keepers ahead of her in the pecking order.

Heading to Vancouver in 2013 to undertake her Masters, de Goede still wanted to play football but had to sit out that season as a transfer. She was back up last year, seeing only 25 minutes of game time, but then the stars aligned.

De Goede was given the starter’s job for this year by new UBC head coach Marisa Kovacs. She made her first ever regular season start on September 5th. That was in Victoria and with a point to prove, she kept a clean sheet, the first of many this season. Just over two months later and she’s wearing the gold medal of a CIS champion.

“I’m super excited and happy,” de Goede told AFTN with the widest grin imaginable after Sunday’s CIS Championship win. “This is the culmination of, for me, around a six year journey through the varsity program. It’s just a great way to end it. It feels awesome.”

After all those years wasting valuable development time at Victoria, could she ever have imagined she would have a moment like this?

“Not at all,” de Goede says. “For this year, just playing this season has been its own reward. Making it this far in playoffs and nationals and obviously this moment, is all just the cherry on top. It’s a pretty nice one.”

The 24-year-old recorded 12 clean sheets in a standout year, five of them in the postseason. After sitting on the bench in Victoria, it was finally the realisation that her skills and hard work deserved. But like all keepers, she’s quick to brush away the personal plaudits and thank her backline.

“Obviously my defence is super well organised, so it limits the amount of shots that actually get me,” de Goede told us. “It’s definitely above and beyond your expectations. You just want to win games. You’re not too concerned about stats.

“But to have done this, it feels great, and it’s testament to both myself and the defence, who are just so well organised.”

Her coach agrees and Kovacs was delighted with her team’s stingy defence this season. There’s the old cliché that defences win championships. UBC won’t disagree.

“Every game, our defence is solid, stout, they play quality football,” Kovacs told AFTN. “But there’s always one, two, three times in a game that the other team will get a solid opportunity and Olivia always comes up huge for us.

“That’s the toughest part. If you’re being pelted with shots, you’re focused on the game. It’s those two or three that you have to be so focused and she always comes up huge for us. I’m so happy for her.”

Kovacs was naturally aware of what de Goede went through with the Vikes and she had special words of praise for the fighting spirit and work ethic of her ‘keeper.

“I’m so, so proud of her,” Kovacs told us. “She stuck around and she put in the work. Some players don’t have that. If they’re not playing right away they might not be patient and they might not see the end goal or end result.

“Olivia stuck by the game that she loves and put in the work despite if she was getting minutes or not. And finally, her number was called this season and she rose to the occasion.” 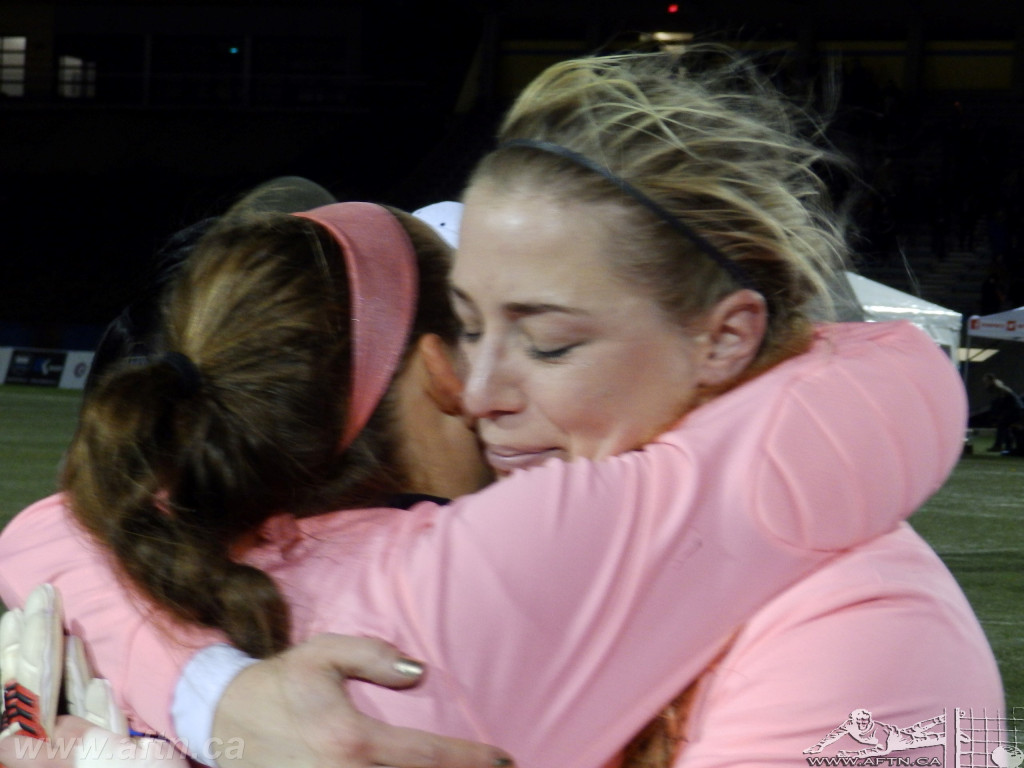 It was clear to see on Sunday that de Goede is one of the most popular members of the Thunderbirds team. The roar she got from her teammates when she went up to collect her Goalkeeper of the Tournament accolade said it all.

But this will be de Goede’s third and final year with UBC. She’s currently doing her masters and working at the Robinson Lab of the Child and Family Research Institute. The lab is part of the Department of Medical Genetics at The University of British Columbia and de Goede “is currently studying the DNA methylation profiles of immune cells in cord blood and their relationship to neonatal immunity” according to their website.

She will soon move on to pastures new though in pursuit of her PhD and De Goede is currently “working on the applications” to Stanford and the University of Washington. But wherever she ends up, she’ll make sure she has time for some football in her spare time.

“When I’m there, I’ll try and find a team to play for,” de Goede said. “I can’t see quitting playing soccer at this point. It’s definitely been a great season.

“I’ve always been super into science, which is kind of nerdy! But I just love genetics and I love the research life. I’d like to stay in academia and hopefully one day become a professor and maybe have my own lab. That’s the goal.”

A career as a professor and a career in women’s soccer are two very different paths.
With limited professional women’s teams in North America, the former throws up the much better opportunities. In numbers and pay.

Academia is de Goede’s prime focus right now, but after impressing and turning a few heads with her assured performances this season, would she even be tempted to try and make it in the pros? It’s unlikely she feels, but she’s not ruling it out entirely.

“Who knows?” de Goede laughs. “I didn’t see this season happening and here we are. But I don’t think I’m talented enough for that.”

But that self-effacing critique isn’t shared by her current coach.

“With what I’ve seen, even from stepping in in the Spring till now, the improvement, if she continues [she can play pro],” Kovacs told us. “She’s a phenomenal keeper.” 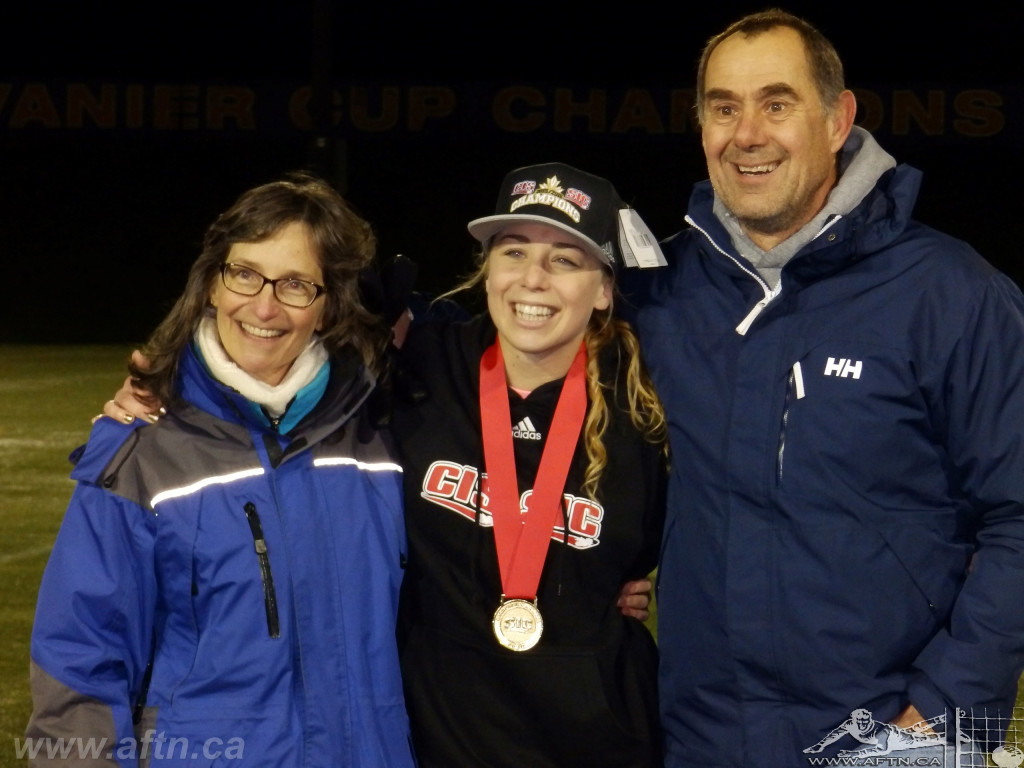