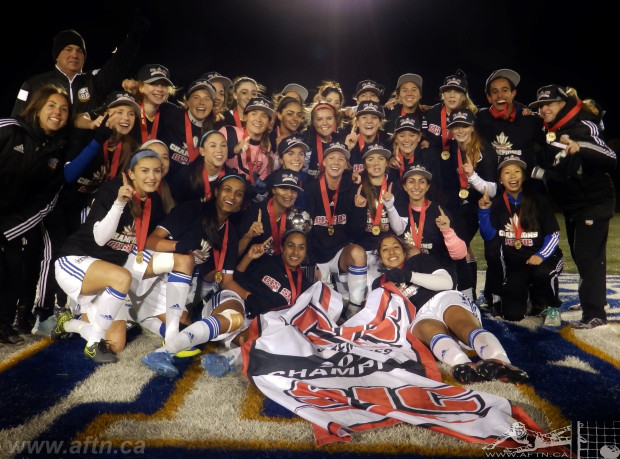 Does it get any better than winning a national title in your home stadium? If you ask anyone connected with the UBC Thunderbirds women’s soccer team tonight, they’ll tell you, no it doesn’t.

UBC clinched a record breaking 6th CIS Championship at a bitterly cold Thunderbird Stadium on Sunday afternoon, with a comfortable and dominant 3-0 win over Trinity Western Spartans in front of 1,153 fans.

After having an early 6th minute goal from Kym van Duynhoven disallowed for offside, UBC finally got the breakthrough that counted in the 18th minute, with a fantastic volleyed finish from Madison Guy over the Spartans keeper.

TWU had a chance to tie things up on the half hour mark, but UBC goalkeeper Olivia de Goede denied Jenaya Robertson with some strong play. It was a huge stop and the Thunderbirds went up the pitch and immediately doubled their lead when Shayla Chorney tucked away a Jasmin Dhanda cross.

There was to be no looking back for UBC now and they added a third in the 65th minute in the all-BC battle, after poor TWU defending at a corner saw the ball deflect off Taylor Shannik and loop over Ally Williamson in the Spartans goal.

The final whistle sparked jubilant celebrations from the Thunderbirds players and coaching staff, and you can enjoy some of those moments in the video below:

The 3-0 victory saw UBC become the most decorated team in CIS Women’s soccer, edging one Championship ahead of Trinity Western, and it was a fully deserved triumph.

“I’m just extremely proud of the girls,” UBC head coach Marisa Kovacs told AFTN after the match. “From just turning things around for themselves. Walking in, I knew we had talent, it was just putting it together. The girls had belief from the very beginning and saw this goal at the end and really wanted it and put in the hard work.

“I’m just really proud of them. They deserve this. For them to achieve it, it’s huge. It’s one thing to have a goal and to set a goal but it’s another to work yourself into the opportunity to achieve it and they did that.”

A fantastic victory for the team and a personal triumph for Kovacs in her first year as UBC head coach.

Kovacs replaced Canadian Hall of Famer Andrea Neill in January, after spells in charge of the SFU Clan and the University of West Georgia, along with Surrey United in the BCPL.

It’s been a fantastic season for everyone at the Thunderbirds, but as she went to bed on Saturday night, such a dominant performance in the CIS Championship game must have been even beyond her dreams.

“Yeah, a 3-0 scoreline, I don’t think I would have predicted,” Kovacs admitted to us. “But you know what, to be fair to Trinity, they have some knocks to some quality players. At this point of the season I think we’re all kinda knocked a bit! They play us tough every game.

“So much respect for coach Graham [Roxburgh]. He does a great job there. They’ve been to the Finals the last four years. We knew it would be a tough match, but yeah, a 3-0 victory, I’m extremely happy with that.” 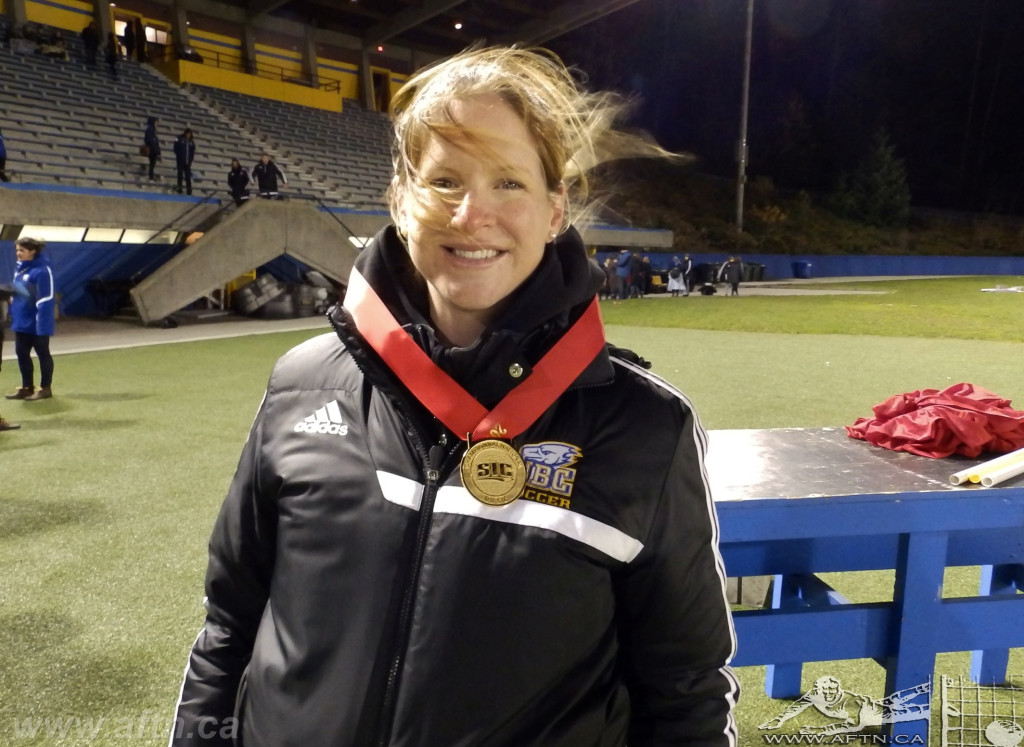 Sunday’s title success will have surprised some in the Canadian college scene. It shouldn’t have. Under Kovacs, UBC have put together and developed an excellent crop of young female talent.

Despite losing just one game during the regular season, UBC headed in to the nationals ranked just fourth overall in the nation and seeded second, after York and Ottawa failed to qualify.

Coming off an undefeated season, Laval were the favourites heading in to the nationals, and despite seeing off Trinity Western, who had been national champs in four of the last six seasons, not many gave UBC a chance to win their first CIS Championship since 2006.

Was there a feeling amongst the squad that their talent and achievements this season weren’t fully appreciated?

“You know what, a little bit, to be honest,” Kovacs admitted. “We were maybe taken lightly at times, but I think that suited us well. Kind of being the underdog and, at times, players playing with a little bit of a chip on their shoulder, with something to prove. And it worked for us, so hopefully we can continue this and continue to have success.”

Part of that feeling of being underappreciated comes from the end of season awards, routinely handed out in college soccer.

As mentioned, UBC topped the Canada West standings during the regular season, quickly going on to win the Conference title, and now the national title. That was achieved with just one loss the whole year, 41 goals for, just 9 against, and 13 clean sheets.

Impressive stuff, but not enough to impress the awards decision makers apparently.

In the Canada West awards, there was no recognition in any of the individual categories, with only striker Jasmin Dhanda making it onto the First Team All-Stars.

In the CIS end of season awards, no Thunderbird was even nominated, never mind won, the Player of the Year, Rookie of the Year or Coach of the Year. No UBC player made the CIS All-Canadian First Team either. Dhanda did make the Second Team. As a side not, Dhanda also won the Championship game and Tournament MVP.

At the end of the day, football is a team sport and individual awards are just a nice additional cherry on top recognition, but still, this apparent snub to UBC was perhaps one of the best motivational factors Kovacs and her coach staff could impart to their team.

“I think it was motivation for the girls,” Kovacs told us. “We wanted to gain a little respect, from the rest of the nation maybe, and I think, hopefully, we finally did that. But the girls even said we’re not here for individual awards, we were here to win the big one. And we won the big one.”

Congratulations to everyone involved with the Thunderbirds from us here at AFTN. A great season. The team won’t be losing too many players to graduation this year either, so hopefully a good, solid base for further successes in 2016 and beyond.

You can see some photos, primarily of the postgame celebrations, in the Flickr slideshow below:

This isn’t the end of AFTN’s Thunderbirds Week coverage. We’re running it Wednesday to Tuesday this year after all of the Whitecaps playoff coverage pushed it back a little. So come back on Monday and Tuesday for two pieces on the UBC’s men’s and women’s goalkeepers – Chad Bush and Olivia de Goede.