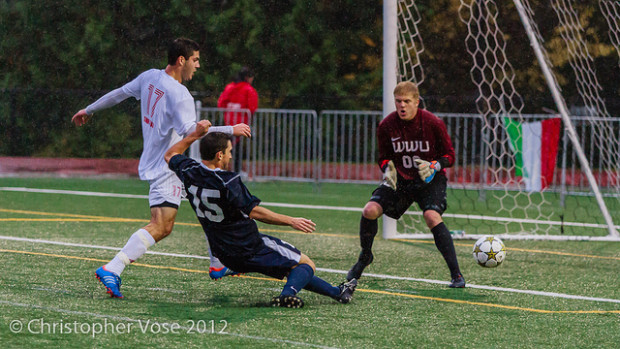 Carlo Basso is now in his third year at Simon Fraser University and the Coquitlam native’s game during his time with the Clan is just showing improvements year upon year.

The 6’4 Junior, who is majoring in history, was named SFU ‘Athlete of the Year’ for 2012 and with 16 goals last year and 13 so far this campaign, it’s no surprise that Basso has also been named on the GNAC All-Conference first team for the last two seasons now and this year he also earned his first All-Region recognition.

With all those plaudits and a spot in the NCAA Division 2 ‘Final Four’, how does Carlo feel the 2012 season has gone so far for him personally?

“I believe it’s had its ups and down. I started off very strong, scoring quite a few goals right off the bat and then I picked up a mid-season injury with the ankle.

Hard to believe that anyone else would describe a season which has seen him lead the Conference in goals, shots and points, that way but that is just a mark of how much Basso wants to push himself to constantly improve and develop his game.

After a couple of standout seasons though, has Carlo found himself more of a marked man this time around?

“I noticed this year a lot with the GNAC, it’s a bit harder defending just because of the success I had last year.

I’m definitely having to use my team-mates a bit more and when defenders come on you and key on you a bit more, it definitely opens up space for your team-mates.

I’ve been passing the ball a lot more in front of the net due to the nature of the defending. So I’ve had a few more assists this year than last year when I had none!”

And it’s not just a few more assists from Carlo this year. His seven assists sees him sharing second spot in the team stats behind Alex Rowley and third place in the overall GNAC stats.

Looking to the future, clubs love a natural goalscorer, which Basso clearly is, but one of the things that can often be key for young strikers to get ahead in the professional game is their ability to be all round team performers and help create goals and chances, as well as bury them.

“Exactly. Just the ability to be able to create for the team.

So that’s definitely something I’ve been working on.” 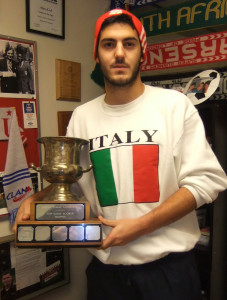 Have the Conference leading numbers he’s been putting up the last two seasons surprised him?

If that means scoring goals and getting assists, then that’s awesome but it’s all about winning games.”

Development at this stage of his career is obviously still vital and Basso is keen to get as much game time in as possible.

He’s come through the ranks of VMSL side Metro-Ford Wolves, winning an Under 21 Provincial title with them in 2010, and did well in last season’s Provincial Cup for the Wolves mens’ team.

Carlo will be returning to the VMSL with the Wolves in January, along with Clan team-mates Jovan Blagojevic and Matt Besuschko, where he’ll be under coach Carlo Corazzin, the ex Whitecaps and Canadian national team player.

How does he find making the switch to that League after a hard college season and how important does he see those games in his development?

“Playing with men, it’s a bit more of a physical game. You always have to be aware of what’s going on around you.

It’s about just getting games when you’re in the off season.

The speed of play may not be as high, but it’s about getting in games, staying sharp and working on things to become a better player.”

As with many college players, summertime brings with it a chance to play in the PDL and Basso’s goalscoring exploits have been catching the eye of many coaches on both sides of the border.

One such coach was Stephen O’Kane of the Ottawa Fury and he took Carlo east in May for the summer season.

Not looking out of place in the slightest, Basso contributed seven goals and two assists in 16 games as the Fury topped the Northeast Division of the PDL Eastern Conference.

So how did that move come about? Why Ottawa?

“I received an email from coach O’Kane and ran it through coach Koch. We thought it would be a good option for me.

With them having a professional team coming in to the NASL next spring, I thought why not go out there, give it a shot and see how it goes.

The team was very successful. There were a lot quality players. It was an area where I grew as a player, and I think as well as an individual, and I brought that back here to be a bit more of a leader and a bit more of a catalyst for the team.”

So what made Carlo go with SFU in the first place? Was it the local aspect, the quality of the program, the educational side of things? Did he have any options from the States?

“I got offered the scholarship for SFU before I was even in Grade 12. It definitely made things a little bit easier for me.

Being local definitely helps, but I’ve followed the team quite closely and since coach Koch has come on board, the team has had nothing but a phenomenal record.

And then with the team going NCAA, that really sealed the deal for me.

Having that combination of academics, as well as that quality footballing side, you can’t get anything better than that.

As we’ve shown, we can compete with NCAA Division 1 schools. We beat the Washington Huskies in the spring, so the footballing aspect is not something I’m concerned about as the quality is definitely high here.”

Whatever college and whatever sports, the one thing that always amazes me is how these student athletes managed to balance their academic work with what is a pretty hectic sporting schedule and a lot of time away on the road.

So just how does Carlo manage to juggle both of those important commitments?

You have to really focus on your time management and be proactive about things.

Your teachers want to see that you’re engaged in the class. If you show them that you want to be there and you want to be successful, they’re very easy going and willing to help you out. But if you’re not on top of things, it can definitely become a burden for you.”

There are many in the footballing community that feel that players’ developments are stunted a little when they go to college, but as we always say, we feel it’s important for these young guys to get an education behind them, as so few players will actually go on and be able to make a living from the game.

It’s something which Carlo is also very aware of:

“If soccer doesn’t pan out, which I’m hoping it does, you always have something to fall back on and become a teacher.”

So what are his long term goals? Does he want to be a professional footballer and if he does, would he want to stay in Canada or does he not care where he goes as long as he can have a future in the game?

“I’m pretty easy going about anything. The ultimate goal and the ultimate dream is to play professionally.

At this point it’s all about getting my education and using this time to become a better player every day.

If I come here and I don’t show up with the right work ethic, I’m not going to improve.