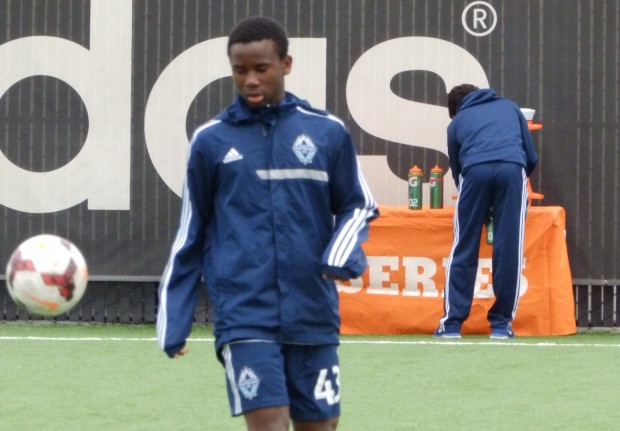 Vancouver Whitecaps’ U16s are getting set for their final game at the USSDA playoffs on Friday, where a win will see them win their group and reach the quarter finals for the first time.

One of the key players for the Whitecaps this past season has been winger Daniel Sagno who contributed 8 goals during the regular season in 21 appearances and has been involved in the Canadian national team set-up at several levels.

Sagno moved to Winnipeg in 2004 from Guinea and joined the Whitecaps Residency program in the summer of 2012 from Portage Trail Soccer Club, making 10 appearances and scoring one goal in his first season at the Caps in 2012/13.

It’s not been an easy road at times for Daniel, who has seen both his parents pass away, but he is starting to thrive in the professional environment of the Whitecaps’ Residency program and will be one to keep an eye on over the next couple of years.

Sagno turned 16 at the end of May and AFTN’s Aaron Campbell had a quick chat with Daniel a couple of weeks ago, which we bring you today as we continue Residency Week – Michael.

AFTN: Manitoba has produced some new great young players for the Whitecaps residency the past few years. (such as Marco Bustos and Kianz Froese). You are another one of that crop. What does it mean to you to be a Whitecap Residency player?

Daniel: Being a Whitecaps Residency player to me means that I have the opportunity to be a professional football player. It means I have a chance to do something great.

AFTN: You have had some hard times in your personal life in the past year. How has soccer helped you get through these situations?

Daniel: I am sure you have heard the saying “soccer isn’t just a game its a lifestyle”. Soccer is something I share deeply with family and friends. It has helped me in a way I could only imagine. I have met so many amazing people. They have helped me during these situations and they continue to support me off an on the field.

AFTN: Yourself and Dario Zanatta have formed a great two man scoring duo this year, how much fun is it playing with him?

Daniel: Dario and I are good friends. Our chemistry off the pitch definitely transfers on the pitch. It’s a pleasure playing with him. He pushes me to be a better player.

AFTN: Who is your favourite soccer player?

Daniel: Fernando Torres. Although we play different positions I love to watch him play.

AFTN: Where do you see yourself in 5 years?

Daniel: In five years I hope by then I have a first team contract with the Whitecaps. If not, I hope to be playing professional soccer somewhere and to have represented my country at the International level for several competitions.

AFTN: You say you what to represent your country playing soccer. Do you want to play for Canada or Guinea?