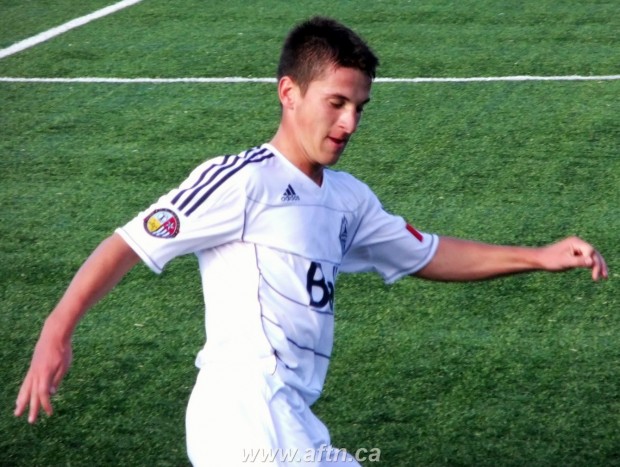 SFU midfielder Alex Rowley has earned himself something of an ironman reputation in his first two seasons in NCAA.

The tough tackling Whitecaps Residency alumni racked up 1416 minutes in 21 games during his freshman year with the Clan, and has followed that up with 1527 minutes in his 21 games so far in his sophomore season.

Only the Clan’s goalkeeper and back four have racked up more minutes this year, with the closest midfielder or striker 388 minutes further back. That’s the equivalent of more than four full games.

It reaffirms what an important part of the SFU team Rowley is.

When the Whitecaps’ talented group of ’93ers graduated from the Residency program in 2012, it was sad to see them all go their different ways.

With so many options available to him, Alex Rowley decided to stay local and go down the college route with Simon Fraser University. What was it about SFU that saw him make that particular choice?

“It’s a great school academically and the soccer program, I’d heard great things about that as well. Being the first team in the NCAA close to home, that’s Canadian, I thought it was a great opportunity.”

And how has he found these first two years of college life?

“It’s been good. Really tough with school, but I think I’ve matured a lot as a person and as an athlete.”

It’s a view echoed by his head coach Alan Koch.

“We inherited a good player in Alex. A very good player from the Whitecaps. He did very well for the Residency team.

“I think he was a boy when he came here. He’s starting to play like a man. He has that winning mentality. He gets himself around. Like any footballer, he has limitations, but we’ve focused on his strengths and he’s been very, very good at what he’s good at.

“He goes out there, he’s very hard working, his distribution is impeccable. His workrate is fantastic. He can spray balls with his left, his right. He’s very industrious.

“He’s a box to box type of midfielder and he’s done a great job for us.”

Alex hasn’t looked back since joining the Clan.

In his rookie season Rowley scored 3 goals and contributed a team leading 10 assists. This year he has 2 goals and 7 assists to his credit and there’s still hopefully two more games to come.

The thing with all academies, the players in them tend to mature at different levels. Some will graduate and be ready to move into the professional environment and some will need to more development, which the college system provides.

What has Alex found to be the main difference between the training and environment with the Caps Residency and the Clan?

The U18s playing games up and down the West coast of the US in the USSDA has also proved to be great preparation for the move to college life.

“With the Whitecaps, we travelled a lot, especially with being the only Canadian team as well. All the experience with travelling and knowing what makes you comfortable in certain situations, I think that really prepared me for all the travel here.”

With the NCAA season being so short and condensed, Rowley and others continue their development by playing in VMSL and PCSL the rest of the year, in Rowley’s case with Coquitlam Metro-Ford, often against much more older and experienced players.

Anyone that’s watched him play, whether for the Whitecaps or the Clan, will know Rowley as being a midfielder that covers a lot of the pitch. The term box to box midfielder is used a lot these days, but that description certainly does him justice.

We’ve always thought of Alex though as more of an attacking midfielder, as his assists these past two years show. So was he as surprised as us when he was named the GNAC ‘Defensive Player of the Year’?!

“I’ve always prided myself on my hard tackling and my defensive game because I work really hard in games. I feel that’s one of my traits, my workrate.

Playing both roles so much, does he have a preference?

“I like both. I guess box to box. Like I say, I think my workrate is the top aspect of my game that I pride myself on. Just box to box. I can play either holding or attacking, it doesn’t really matter to me.”

Rowley was surprisingly kept scoreless during the regular season, with the width of a post or crossbar getting in the way several times. He opened his account for the season though with two screamers in the 5-0 first round playoff demolition of Cal Baptist. Was he saving his goals for the postseason?

“Hopefully I get a few more but it felt really felt good to get a couple of those. One of them was I think probably the best goal I’ve scored in my life. It was really exciting. I almost couldn’t believe it. I took a few guys on.

“I’ve been unlucky. I’ve hit a few posts and just missed and stuff. I’m doing other things off the ball and setting guys up. Goals, I’m not really expected to score that many goals so it felt good.”

You can see both the goals below.

Since going to SFU, Rowley has been used to success, with last year’s Final Four defeat a rare blip.

It doesn’t get much better than two Conference titles and back to back Final Fours in his first two years at college. A national Championship would be the ideal betterment and that’s what Rowley and his Clan teammates are fully focussed on.

So how does Alex feel to be heading back to the Final Four?

“I’m really excited. Last year was a great experience and I think we learned a lot from last year. I’m looking forward to this year as we’re going with a lot more experience.”

As one of the players who was there last year and went through both the hype and disappointment of their semi final loss against Saginaw Valley, what can Rowley and others share with his teammates who will be experiencing the occasion for the very first time and how to prepare to go that one stage further?

“Just focus on the first game. Last year we got caught up in the moment. We didn’t really focus on just the one game and we needed to do that. So just focussing on that first game will be what’s important.”

Rowley is currently studying human geography and the thing which always amazes me when you talk to any of the college guys is how they manage to find the time to balance the study and the sport side of college.

Of the Whitecaps, Rowley said “I haven’t really talked to them in a while.”, which for us is disappointing that they’re not keeping tabs on a talent.

Most of the U18s talk about their time together as being as a family and they do still all keep in touch with each other.

“Yeah I talk to all the guys. Almost every week we talk. We always wish each other luck and joke around with each other about how we’re playing.”

With the Caps new focus on youth and homegrown talent, might we still see Alex wear a Whitecaps jersey again?

“I don’t really focus on that, I just focus on playing my best in every single game and practice and then hopefully I’ll get some opportunity somewhere. I’m not really sure where. Just focus on doing what I can do to make myself as good as I can and hopefully someone takes notice.”

So what does the footballing future for Rowley maybe hold in store?

“I’d like to have a professional career after I finish at SFU. I don’t know where that would be, maybe Europe or somewhere else. Anywhere, I’d like to go play.

“When I’m done with SFU I’ll be 23, so I’m still really young. I think I’ll mature a lot as an athlete and a person by then. I’d like to go and try to play professionally.”