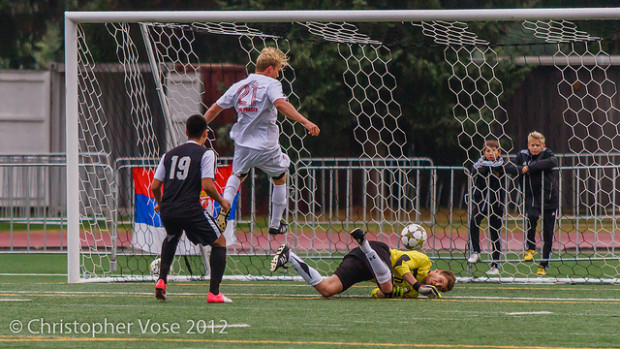 When you look at student athletes who are performing well for their schools and their programs, you automatically assume that it was sporting reasons that has seen them play for their chosen college.

That isn’t always the case and SFU Clan’s midfielder Chris Bargholz is an excellent example of that.

The 21 year old German Sophomore chose to head over the Atlantic to BC for academic more than sporting reasons and it’s the Clan who are getting the added benefit of that decision.

So what exactly was is about SFU that brought Bargholz to Burnaby?

Bargholz came to the Clan with a strong footballing pedigree and was playing in the fourth tier of the German League in 2010 for Bavarian side FC Memmingen.

For those with footballing skills in Europe, going to university is not often an option considered by many. With so many clubs and so many options, young players often forsake their education for a shot at making it in the game at some level.

Chris decided to buck that trend, by not only giving up his semi professional career, but also changing countries and continents.

Canada sends a lot of our young players over to Germany to play, but Bargholz felt coming the other way was what was better for him.

Does he think the education option is something that other European players may pursue as a viable route for a career in football or is that still in the early stages over there?

“I think it’s still in the beginning stages a little, but I know from my friend base a couple of people who also tried to find their way to the US and tried to play soccer there.

It’s hard to be a pro in Germany and to live from it.

Also if you go to university, it’s very very hard to manage football and school at the same time when you’re with a club because you train every day and university isn’t scheduled around that. So you might have class and practice at the same time and then it doesn’t work.

So SFU was the best possibility for me to combine soccer and school at a high level.”

And he seems to be excelling at both.

In the classroom he is getting good grades and on the pitch his performances are also getting him noticed.

Named the GNAC ‘Freshman of the Year’ in 2011, in a season that saw him record seven goals and three assists, Chris has continued to shine this year, netting five goals and six assists in 18 games.

He is third in the team with assists and fifth overall in the Conference, and his 44 shots on goal sees him second in the team stats behind leading scorer Carlo Basso, stats which earned him a place in the GNAC All-Conference second team.

He’s certainly a player who has stood out for us this season as he tears past players on the wing.

It may surprise many then to find out that Chris hasn’t come to North America to try and make it in MLS or NASL, or even back in the Bundesliga.

“No, that’s not my goal. My goal is to do well in the university and get a proper job! But if it happens then….

So a regular job for now, but if the footballing side happens you’d be happy with it.

“Exactly. Otherwise I would have stayed in Germany and tried it there, but I chose to come here.”

Bargholz is majoring in Business with an Economics minor, so what would be his ideal career path?

“I haven’t figured that out yet, but probably just go with a company and take it from there.

I’m keeping everything open and see what happens. I’ll do some internships the next couple of years and see where it takes me.”

For now, all his attention is turned to footballing matters and the ‘Final Four’.

Now in his second year, like everyone with the Clan, this is his first taste of NCAA postseason action. How has he enjoyed his first experiences of it?

At first you play just the GNAC, then all of a sudden it’s playoff time and every game right now counts.

So all of a sudden you feel a bit more pressure, but because of our good team bonding especially, we’ve managed it pretty well so far.”

Coming from Germany, especially at regional level, where you can just hop in the car for a short distance to away games, how has Chris found not just the constant travelling in this postseason, but also the vast expanses the team has to cover doing it?

“For me, my whole youth was just playing in the area. Then I played semi-professional at the end and the furthest was a five hour bus ride.”

So what is he expecting from the other three teams in the ‘Final Four’?

“I don’t really care about the other teams. I just look at my game. So whoever comes.

When I was 18, I played in that fourth division and I played against so many good players, so no matter who comes right now, I don’t really care.

Just bring it on.”

Bring it on indeed.