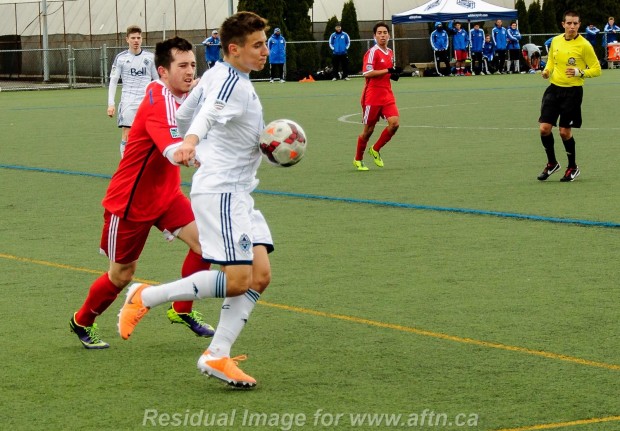 At the beginning of the 2013-14 U18 season it seemed like every position on the field was filled with an exciting prospect. That is every spot except the right back one, where both Quinton Duncan and Matthew van der Eyden left for college and there was no one moving up from the U16s.

The team was forced to use centrebacks and holding midfielders to fill the role until part way through the season when they were able get Chris Serban to cross the Rockies from Calgary to join the program.

It wasn’t the first time the defender made a big move in his young life as he moved from Romania to Canada with his family at the young age of two. Despite growing up in what many would consider a hockeycentric city, there was no doubt in Serban’s mind that soccer would be his calling.

“Being from Europe, I can say soccer is in my blood and I fell in love with this sport from the start.” Serban told AFTN this week.

He continued rising through the ranks of Alberta Soccer and it was soon clear to him that there was a chance he could play for a living.

“I was about 12 when I was playing at the top level in Calgary (CMSA Div 1) and was also selected to play for the Alberta provincial team, so I developed a taste for the potential opportunity of playing professionally.”

During his developmental years he would play five years with current Whitecap Marco Carducci, in addition to playing with and against other soon to be future Residency players like Sam Adekugbe, Mitch Piraux, and Jackson Farmer.

However it was his coach and former Whitecaps Residency manager Thomas Niendorf who helped get Serban a trial with the Caps, which was successful and he joined the club a week later.

“He’s come in to the program and he’s a great kid, good attitude,” Forrest told us. “He applies himself very well to training and games and in that right fullback position he’s done a very good job. That’s an area of the Residency we’ve been looking to strengthen.

“His strengths are his character and his application to the training and games, his work rate. He’s so energetic, he just wants to do well. He’s got qualities going forward and defensively as well.”

This isn’t the first time Serban has left home to take an opportunity to grow his game, as he spent portions of the last ten years playing in tournaments and training with clubs across Europe. In the last few years he trained with teams like Valencia (Spain), Fortuna Dusseldorf (Germany) and CFR Cluj (Romania) and that time in Europe Serban feels really helped his overall game.

“These experiences were very rewarding and helped me develop new skills and grow as an individual”, Serban notes. “I had the privilege to work with many amazing coaches and play with some very talented players. The encouragement I got from all the coaches I worked with was to continue the hard work and my love of the game.”

Most would think after training with European clubs, joining an academy of a North American team would feel like a drop off but Serban didn’t see much of a difference.

“Both are extremely well structured and have quality training sessions. In Residency there are many coaches/trainers that work with the players to ensure they are at their best compared with Europe where one or two coaches only are responsible for running the entire program.

“In the months I’ve spent here, I have improved my speed of play, tactical awareness and physicality through rigorous training and lots of game time against tough opposition. Working with great coaches that always provide constructive feedback has also helped me build my skills further.”

Despite training with, and playing for, so many experienced coaches the most influential person in Serban’s game is his dad Florin, who is also a linesman for the Calgary Soccer Association.

“When I was younger, my dad was my coach and he had a huge influence on the way I play the game. He used to say “be quick, but don’t rush it.” I will always remember those words. Whenever I’m on the ball, I try to be composed and calm. This allows me to make smart decisions.”

However it’s just not his dad, but his entire family, who have supported him in his pursuit of making a career of the sport.

“Growing up, I’ve always had my family by my side, supporting and guiding me towards building and chasing my dreams. It has been an amazing journey and I know I am here today because of their continuous support and love they have shown all these years. My mom (Daniela) and my sister Eli are my biggest cheerleaders.” When it comes to patterning his game Serban looks to fellow full backs but the player he admires most is a current Argentine World Cup star.

“(Pablo) Zabaletta is a player I watch and try to model my game after. I admire his work ethic and the intelligence he has when he advances forward to join the attack.”

Not only did Serban start regularly for the U18s this season (making 15 appearances and grabbing one goal in the playoffs), but when the PDL season started Serban started getting time with the U23 team as their regular right back playing against older players and doing well.

“I have always had the opportunity to play with older players. This has definitely helped me expand my game in being even quicker on the ball and tested my physicality to its fullest with the U23s as the players I’ve played against were physically stronger and more experienced.”

Despite making great strides this season with the Whitecaps, Serban realizes that there a number of skills he needs to further develop in order to get to his ultimate goal of playing professionally.

Graduating from the Residency program will now see Serban take on another opportunity as he heads to UBC to play for the Thunderbirds and study in the Bachelor of Commerce program, whilst also staying in the Caps program at PDL level.

“There’s always room for improvement in all aspects of my game. I can work on my touches, passing, shooting etc. I can also work on the physical side of my game including strengths, speed, agility and flexibility.”

It will be interesting to see Serban’s development at UBC. Mike Mosher has built up a very young and talented Thunderbirds team, winning back to back CIS Championships, and it will be a great environment for him to continue his growth.

For all the talented players the Whitecaps Residency has produced, the right back position has always seemed to be one which has been lacking for future MLS prospects.

Now, in an already well travelled Calgarian, the Whitecaps may just have that ‘homegrown’ talent they’ve been looking for in the position.

Chris Serban is certainly a player we will be keeping an eye on.