After our week of build up, Simon Fraser University Clan take on Michigan’s Saginaw Valley University Cardinals in Georgia on Thursday with a place in the NCAA Division 2 Championship game on the line.

SFU are the only number one ranked team in the ‘Final Four’ and have the best season record, at 19-1-1, of the remaining teams, but nothing can be taken for granted at this stage of proceedings and the Clan know they will need to be at their best to make the Championship game.

So does Clan Head Coach Alan Koch know much about the opposition he will face? Has he been able to have them scouted in the short turnaround time?

“I used to coach NCAA in the States, so I’ve got a huge network of coaches I can tap in to. We’ve tapped in to them already.

I think I’ve managed to put together a very good scouting report on Saginaw Valley already. I think we know how they will play and I’m pretty certain they’ll know how we will play.

We’ll take a couple of things about how we think they will play, but the primary focus for us all season long has been how we play.

I think if we play to the best of our abilities we’re going to give ourselves a great chance to win.

We have to play to the best of our abilities and deal with a couple of threats that they pose. So we have scouted them definitely.

We’ll go scout the other semi final when we’re down there, which is before our game unfortunately. We’ll scout that game in the hope that we’re going to win our semi final and play in the final.”

And that extensive gameday preparation has been an important part of the Clan’s success throughout the season:

“We’ve scouted every game we’ve played all season long. It’s either game tape or we’ve been to watch the teams play or discuss the games with coaches they’ve played against.

We have to be prepared. I think a big part of being successful is preparing yourself for those games.

We work with our guys but our coaches do a great job in terms of preparing us for who we play against and that kind of stuff.”

Taking one game at a time is also the Clan’s other mantra and first up is Great Lakes Intercollegiate Athletic Conference side Saginaw Valley in Thursday’s semi final.

On paper it looks like a match up between two potent attacks and two stingy defences. Something has to give and SFU probably go into the game as favourites.

The Cardinals head in to the ‘Final Four’ with a 17-2-4 record, having disposed of two number one seeds, Rockhurst and Northeastern State, in the last two rounds and looking for a hat-trick against the Clan.

Seedings apart, Saginaw Valley have got to the last four the hard way.

Following a bye in the first round, the Cardinals needed a 6-5 win on penalties to overcome Quincy in the last 16. They then needed an overtime time win over Rockhurst in the ‘Sweet 16’ and then double overtime to see off Northeastern in the ‘Elite 8′.

They have been a hard team to break down most of the season, recording 13 clean sheets in their 23 games played, and this will be the biggest test for SFU in the game. In October alone, Saginaw Valley only conceded one goal in eight matches. SFU of course aren’t too shabby in that department themselves, with ten clean sheets.

SFU will definitely need to keep an eye on three of the Cardinals’ strikers.

Top scorer Zach Myers has 16 goals and two assists this season and scored the winner in the last minute of double overtime in the quarter-final to send Saginaw Valley to the ‘Final Four’. His strike partner Lachlan Savage has 10 goals and three assists, whilst Robert Short leads the team with 10 assists and has also added three goals.

It’s going to be a hard fought game for sure.

Here’s a little head to head tale of the tape for the two teams: 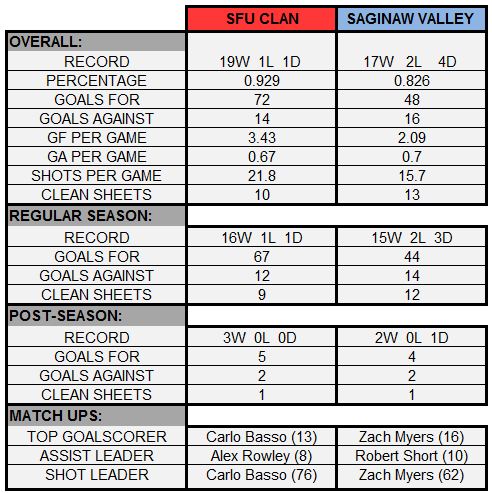 The game kicks off at 11am PT and can be seen live on the NCAA.com website, with the other semi final between Lynn and Mercyhurst kicking off at 8am PT.

We’ve been told it’s going to be a professional, TV quality stream, so tune in and cheer the guys on to glory.