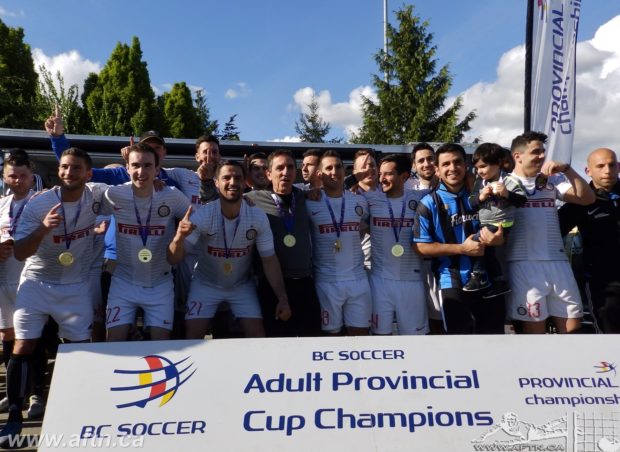 The VMSL side saw off the challenge of FVSL champs Aldergrove United to come away with a 2-0 victory at Burnaby Lake on Sunday in a match which entertained in the first half, disappointed in the second, and ended with a mass brawl that saw a number of red cards dished out in stoppage time.

It wasn’t a game packed with too much quality, with both teams adopting the long ball to try and find their tall target men and fast wingers. But it was an enjoyable first half none the less, full blooded, with the action fast paced and going from end to end without much time to catch your breath.

Both teams had chances in the opening minutes, with Inter keeper Erman Ozkan saving from Sunny Pamma in the third minute and his Aldergrove compatriot Nuno Jesus saving a Milad Rahmati shot at the near post three minutes later.

Inter’s Milad Mehrabi came closest yet to breaking the deadlock with a dipping 10th minute shot that crashed off the bar, before Aldergrove had a penalty appeal waved away when Brett Wiens went down in the box under a challenge from Todd Lucyk.

But when Wiens was sent crashing in the box again four minutes later, after a challenge from Alex Marrello, this time he got the decision and the referee pointed to the spot. 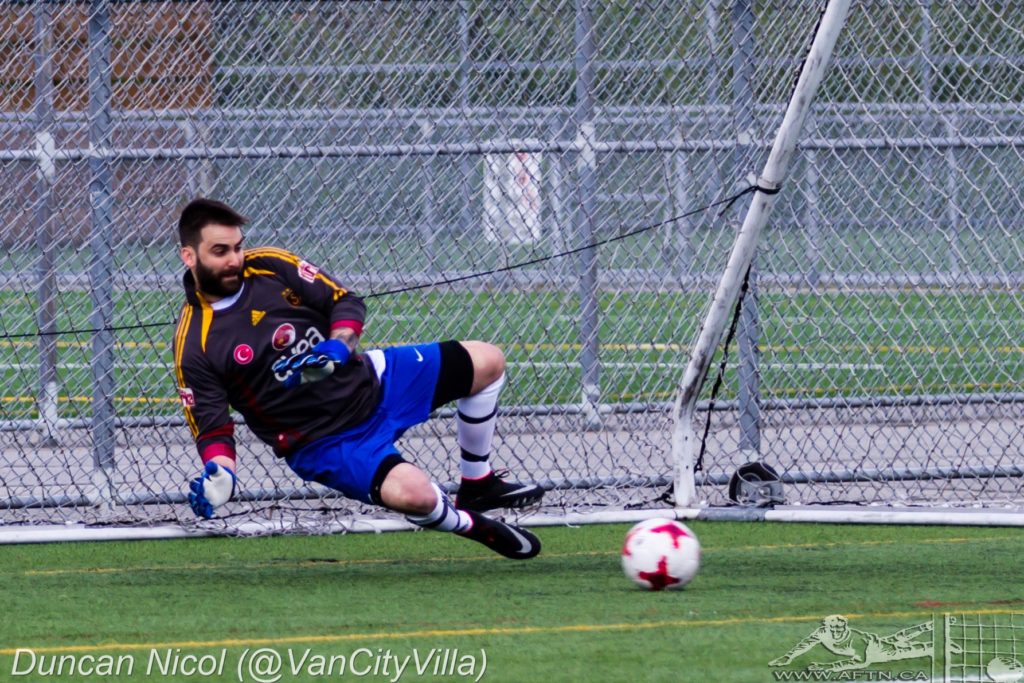 Aldergrove’s top scorer, and FVSL Player of the Year, Connor Hildebrandt stepped up to take the penalty, but Ozkan went the right way, pulling off the save to keep the scores level. It was the first penalty Hildebrandt had missed all season, and you started to already wonder if the FVSL hoodoo of never having won the Cup in the tournament’s 95 year history was set to continue.

The action started to lull after that initial explosive burst before Wiens crashed a header from a corner off the bar in the 38th minute.

Those close calls were to come back to haunt Aldergrove three minutes before half time.

A spell of Inter pressure was rewarded with a goalmouth scramble that ended with Michael Nonni’s shot crashing off the post and the rebound falling to the always dangerous Rahmati, who fired it home past a diving Jesus to open the scoring. 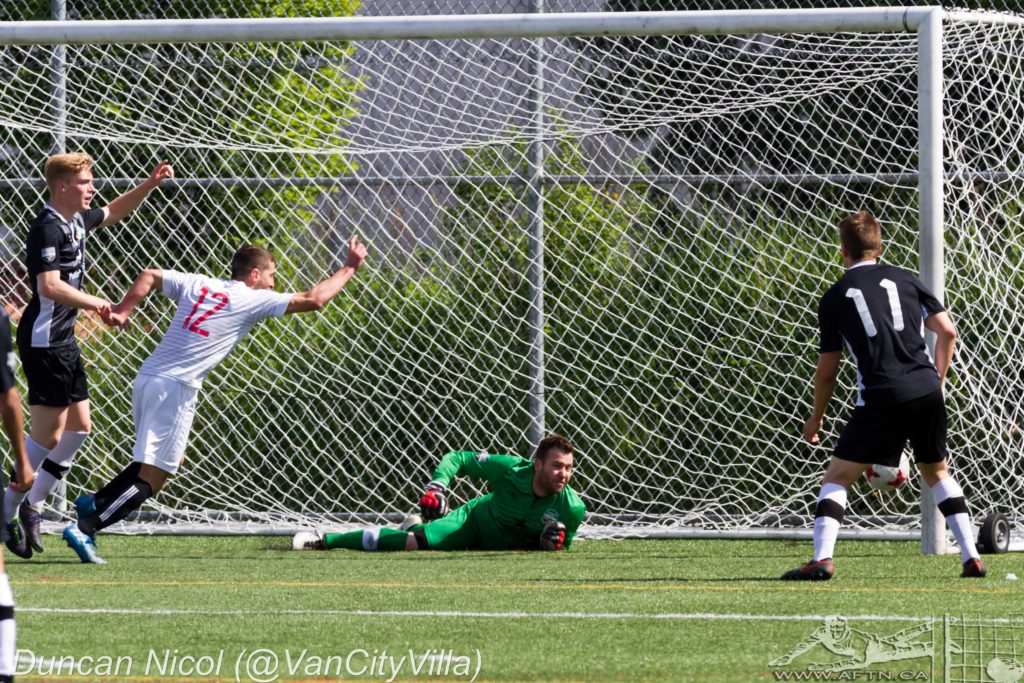 It was always going to be an uphill struggle for Aldergrove after that against an Inter side that have shown in this cup run their ability to grind out results when they take the lead, thanks to a rock solid defence and deadly counter attack.

And that was pretty much how the second half played out. The Fraser Valley side spent much of it in Inter’s half but they just couldn’t find a way past the VMSL side’s resolute defence and it was the Vancouver side had had by far the best chances, looking a constant danger with their quick counters.

Aldergrove’s cause wasn’t helped when their influential goalkeeper Jesus was flattened by Nonni, seven minutes into the second half, with the FC Edmonton man leaving a foot in when contesting a ball and catching the keeper on what appeared to be his shoulder.

It looked to be at least a yellow card, possibly a red as the foot was up, but that might have been very harsh. In the end the referee just gave him a talking to, as Jesus received lengthy treatment.

After playing on for a few minutes, the keeper was forced to go off, and with no back up keeper available on the bench, Aldergrove had to field an outfield player, Josh Young, between the sticks for the remainder of the match. 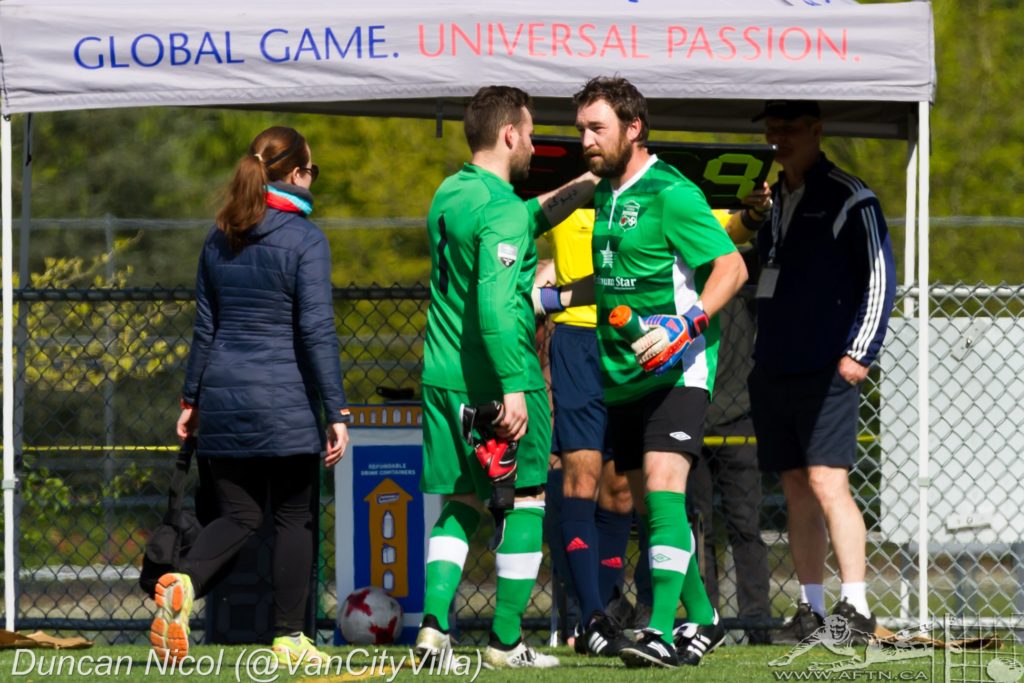 Inter clearly sensed this was going to be their day and had a couple of chances to put the game to bed crashing a shot off the outside of the post and then Rahmati forcing the stand in keeper to save at his near post after another quick counter and some nice footwork.

Rahmati had another chance when he was through on goal but Young did enough to put him off and he shot narrowly wide.

For all Aldergrove’s possession, they simply weren’t getting goalscoring opportunities, and the constant stop/start pace of the half due to injuries, free kicks, and other stoppages certainly hurt their free-flowing playing, resulting in them pumping long balls in to Wiens.

Mitchel Kuemper had a long range shot that flew over with nine minutes remaining, as Aldergrove pressed, but their desperation to get forward was leaving them short at the back and both Brendan Shaw and Rahmati had chances to put the game to bed in the closing minutes of normal time.

With around ten minutes of stoppage time to be added on, due in particularly to Jesus’ injury and a later clash of heads, Aldergrove were now desperate, but Inter had played the perfect time and were seeing out the match fairly comfortably.

Six minutes in to stoppage time, Inter won a corner of the left, and after initially taking a short one, the kept hold of the ball, with it eventually coming to Rahmati, who showed a burst of speed and a shimmy to get past two defenders and drill it low into the far corner to seal a famous win for Club Inter. 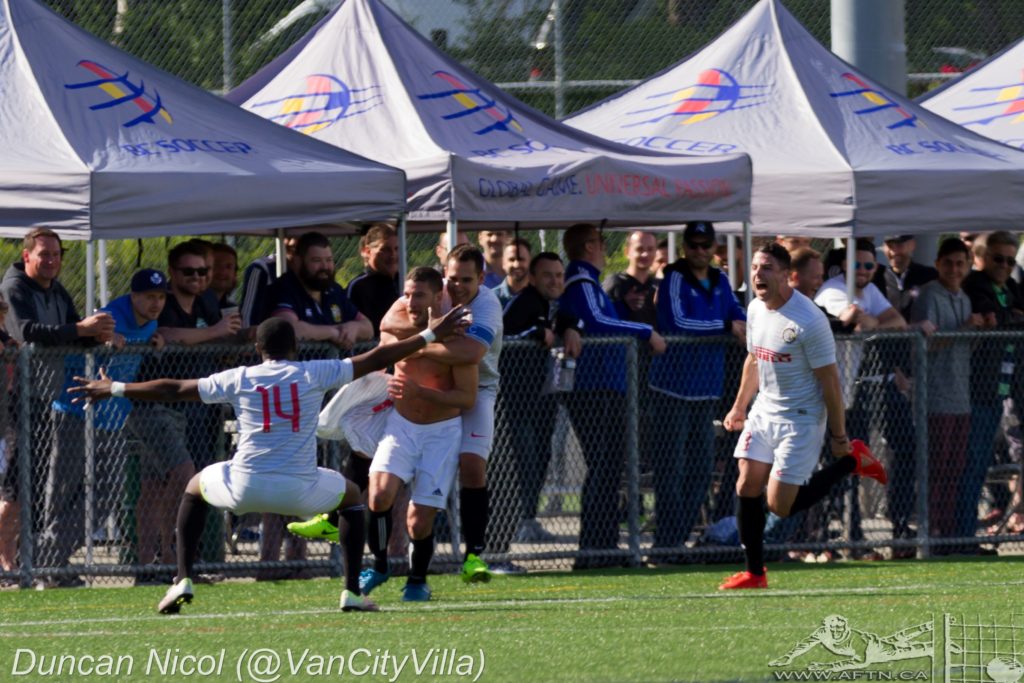 Rahmati’s goal sparked jubilant celebrations from the Inter players and fans, yet his two goal performance still wasn’t enough to earn him Man of the Match plaudits, those went to Erman Ozkan for Inter and Brett Wiens for Aldergrove.

But the celebrations and Aldergrove’s frustrations finally boiled over from the restart.

Hildebrandt tried to work his way through the Inter team from the kick off, but as the ball got away from him, a wild two-footed lunge into the ankles of an Inter player sparked a mass brawl, that took about a minute to settle and when it did four red cards were issues, two to each team, with only a booking to Hildebrandt!

It was to be the last action of the match, with the referee quickly blowing the final whistle before anything else kicked off and Club Inter were BC champions. 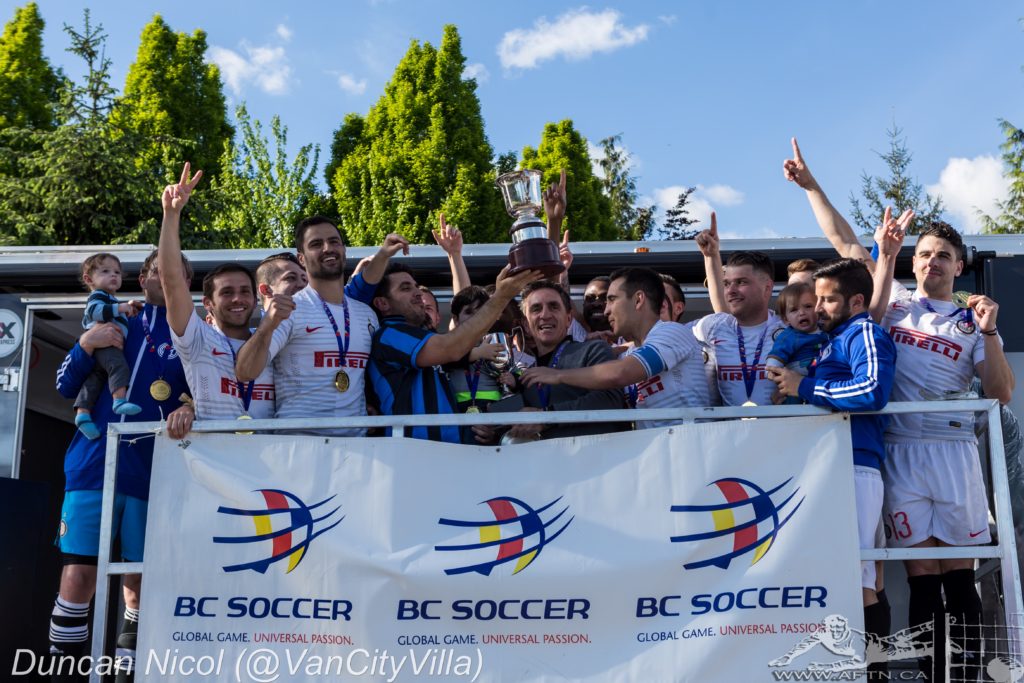 It was a remarkable cup run and win for Club Inter, who only secured their place in the Provincials thanks to a last game victory over VMSL champions Coquitlam Metro Ford Wolves and seeing the two teams above them fail to win their final matches.

It was the first Provincial A Cup win for Inter in their 27 year history and goes some way to exorcising the demons from their 2015 final loss due to some horrendous refereeing decisions going against them.

Inter now advance to October’s nationals, which be held in Langley. Aldergrove United may also end up there, with it yet to be confirmed whether BC will have two slots as host or not.

So massive congratulations to Club Inter on their victory. You can watch our highlights of the match below:

We enlisted the help of Southsiders photographer Duncan Nicol to shoot the final for us (give him a follow on Twitter – @vancityvilla). You can all of his photos, and a couple of others from myself mixed in, in the Flick slideshow below, or find them all HERE. If any players want some unbranded photos for themselves, get in touch.