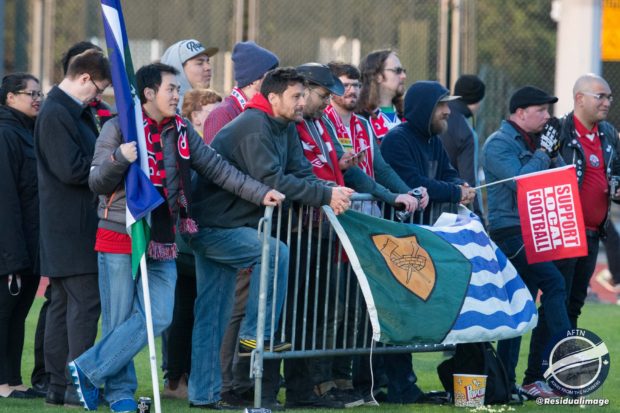 That was a Swanguardians chant on Friday night at TSS Rovers’ home opener, following a week that had seen the team deducted three points for fielding an ineligible player and starting the match on a -3 points total.

They’re still leading the ‘tournament’, following Friday night’s 2-2 draw with Lane United. They’ve just dropped a shot if we want to go with the same analogy.

“We got a point!” head coach Colin Elmes joked with AFTN. “In the PDL. We’re dragging ourselves back into this.”

It’s a strange looking PDL Northwest Division table right now. TSS are at the bottom on minus two. Calgary Foothills lead the way on six. Seattle and Portland’s U23 teams haven’t even played a match yet. I believe the Division’s Facebook page has an “it’s complicated” status.

TSS fell behind to a 29th minute Lane opener before fighting back to level five minutes later and go ahead midway through the second half. But a defensive blunder was punished in the 74th minute. Lane tied things up and pushed hard for the winner, leaving TSS hanging on a bit by the end.

Like much of this season so far, an emotional rollercoaster of a match for Elmes and the team.

“I thought we should have been 3, 4-1 up at half time,” Elmes told AFTN. “We had probably six or seven, what I would consider maybe not A scoring chances, but close enough that at least one or two more should have been put away. Then we go 1-0 down and it’s the flow of play again. Credit to the guys, they got one back and then clearly went on the front foot and second half, won the penalty and I thought we were going to carry it.

“They weren’t threatening us at all. They almost looked like they packed it in a little bit and then of course we contrived to let them back in the game. Then their tails went up and I don’t know where ours went for the next 10 or 12 minutes. It was like batten down the hatches and hold on for dear life basically. I don’t know if there had been another five, seven minutes in that, I was a bit concerned we might have given up our point.” 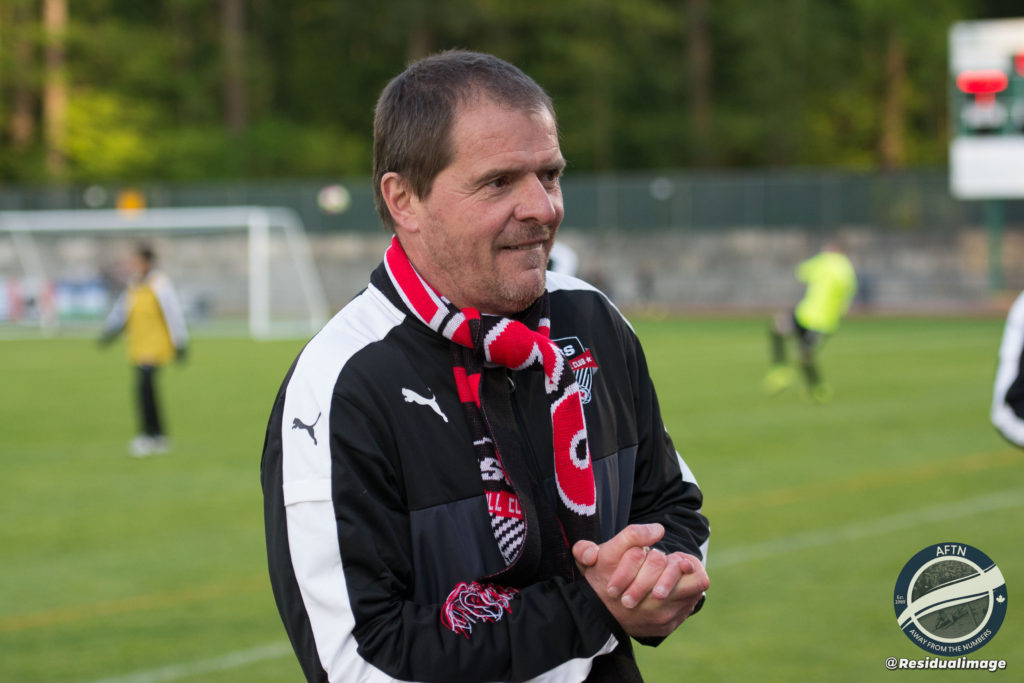 For the mentality of this young group, hanging on to take at least a point was crucial. They did, and despite surrendering their lead late on, it was another promising performance from a team that’s still finding their feet with each other, never mind in their new environment.

“Overall, outside of the last 12 minutes, where we seemed to capitulate a little bit there, I thought we did very well,” Elmes added. “We got the ball down and played and got out of some tight spots. I thought we entertained the people here. If I was here watching this, without any emotional attachment to what was going on, I would have enjoyed that.”

The general post-match consensus is in agreement. People seemed to have a blast and it was an entertaining match. There were a few lulls in plays, but it was end to end stuff for a lot of the game, with little time to catch your breath as both teams moved the ball around quickly.

A healthy crowd of probably around 600-700 was there to see it (the team are still tallying their ticket sales after some teething problems on the night), despite other attractions of the Whitecaps on TV and U2 at BC Place, and that was one of the most pleasing aspects to TSS from the night.

“We had no idea how all of that was going to unfold,” Elmes admitted. “We thought we were going to get a good group out but I’m driving there from Richmond and it’s just bucketing down and I thought ‘oh no’, and then of course the sun came out Although we were incredibly frozen cold on the bench in the first half when the wind picked up.

There were a few standout players from Friday’s game that will definitely make fans want to head along to watch them play. For us, Zach Verhoven was the Man of the Match.

The UBC Thunderbirds winger put in an electrifying performance on the right, especially in the first half, setting up Kristian Yli-Hietanen’s equalising goal and causing the Lane defence no end of problems with his pace and footwork. He’s definitely one to watch this season. 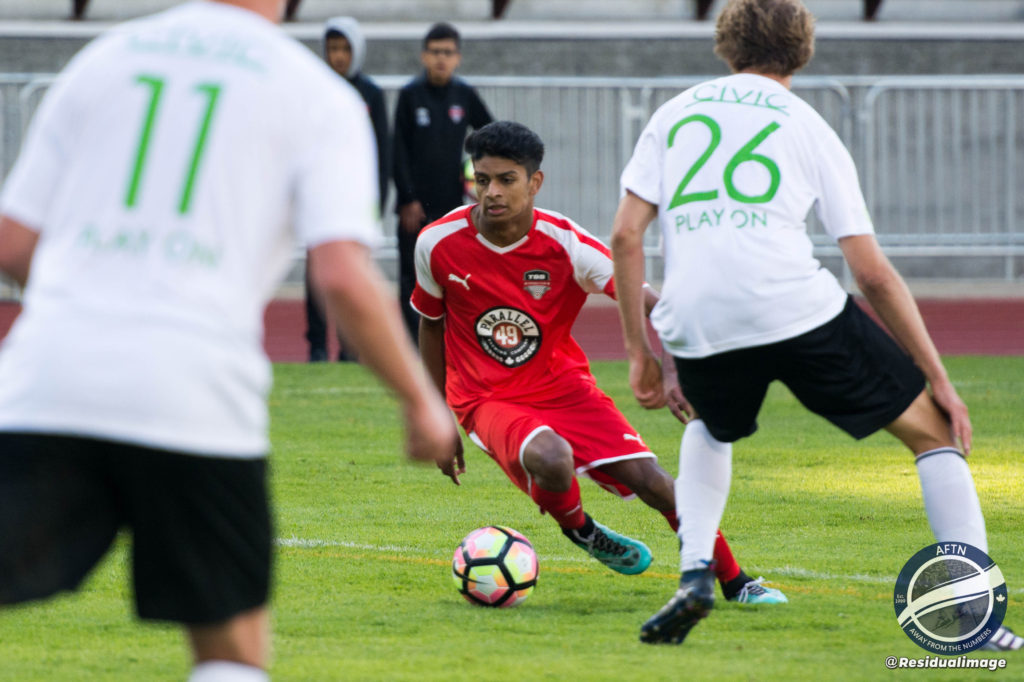 “We told him the other day, he’s 18 and he has a long way to go, but he has no idea how good he is,” Elmes told us. “We’ve got to clean up some stuff when he’s not on the ball, but he did a really good job tracking [on Friday] night. He got a little tired at the end there, we were on him, but an absolute menace one v one. When he got past his marker for like the third or fourth straight time, I said to the guys on the bench, if I was a left back in this game I might have packed it in and left.

“He is very shifty. Willie [Cromack] and I call him Spiderman. He’s kinda got that elastic kind of look to him. Stop and go, very, very deceptive on the dribble. Calgary quickly, last weekend, doubled and tripled up on him, because they realized and he had a couple of those moments in the Calgary game, where they could sort of see that this guy was going to be a threat, but [against Lane], I thought he was one of our better players out there for sure.”

The centre of midfield is also looking like it could be a position of strength for TSS as the season goes on.

Two players made their debuts for the team on Friday night, Connor Hildebrandt and Matteo Polisi, and both aren’t afraid to run through teams as they power forward. Hildebrandt got the start and Polisi came on for him midway through the second half, and there were glimpses from both that indicate that they could be key players for the Rovers this year. 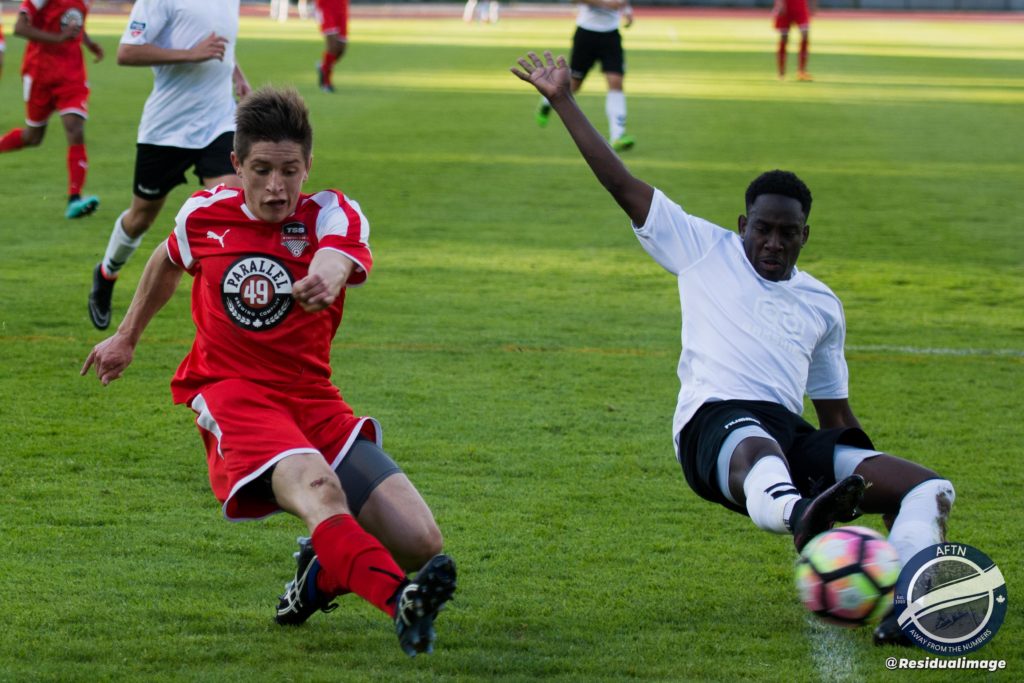 “Connor is clearly on a very good run in the local amateur league,” Elmes said. “I thought in the first 10 to 15 minutes he was a little bit off the pace. I think he was nervous, with all the stuff he’s been through lately, all the successes he’s had. I think he piled a little bit extra weight on his own shoulders.

“We had him out wide, and that’s not really his gig. We could tell he was a bit edgy, but he got a lot of good things done. Tracked, won a bunch of tackles, got into some attacking movements and was fairly successful. Decent debut for him for sure.”

It’s all about development for TSS Rovers. Elmes’ desire is to have his players leave as better footballers than they arrived after a season of PDL play. There are certainly a number of players on the Rovers roster that have some exciting, natural talent. A little raw, but with great potential, and it is genuinely intriguing to see how they respond to a summer of full time training.

Yli-Hietanen is one of those. He’s a clear talent, with a proven goalscoring record at every level that he’s played. A tall target man, who also excels with his hold up play and the ball at his feet. Friday’s goal was his second in three matches, and considering that only a few weeks ago he was scheduled to be playing his football in the Richmond Summer League, the Capilano Blues striker is seizing his opportunity to put himself in the shop window with both hands. 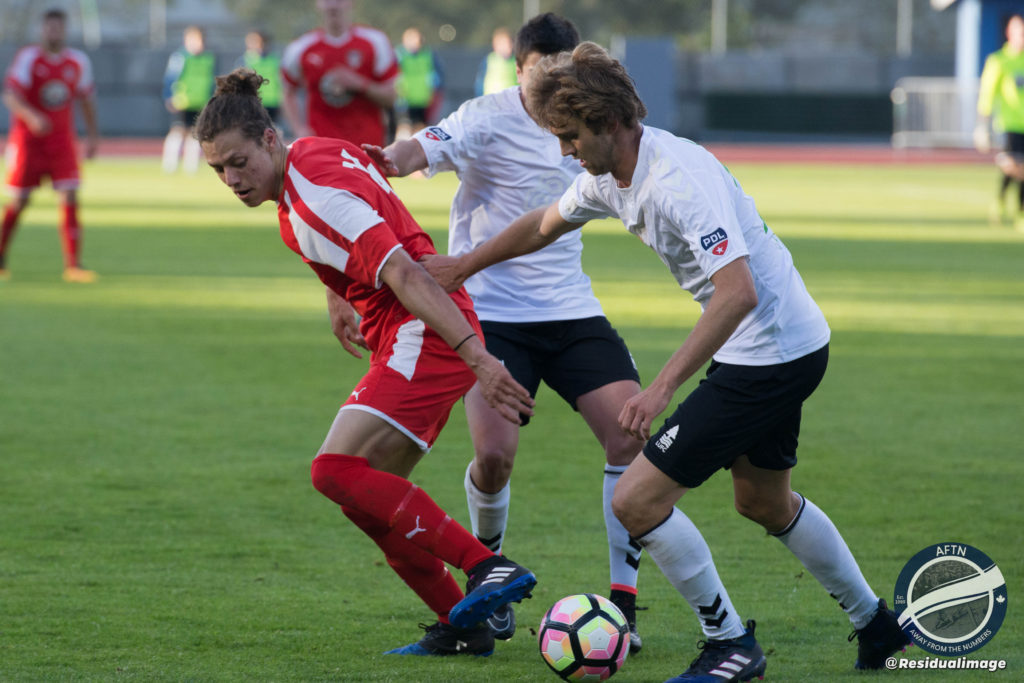 And it just leaves you wondering how far a number of these players could go if there were more professional development environments available to them at this range, something the Canadian Premier League should be set to remedy.

“For sure,” agreed Elmes. “There are several of the players that are in our mix here, Kristian being one of them, who have probably had a spotty kind of coach intervention. He does a lot of stuff by the seat of his pants and maybe hasn’t had a lot of instruction in his young years and what not. But what a great little flick for the goal. He almost did it again on the other side about 10, 15 minutes later.

“The Calgary coach Tommy Wheeldon paid a really good compliment to him last week. He said ‘my centre back never got a clear header’. When we picked the team initially, Kristian unfortunately wasn’t in the mix. We were kind of like, there’s the target. Daniel Davidson, different type of player. We don’t really have anyone here who can hold the ball up in the way that Kristian can. He’s got to work on his first touch a little bit, but he’s up for the battle.

“There’s going to be some points here because he gets in the way of things. Goalkeeper clearances and different things. He’s going to nick some stuff. He’s a nuisance. I would imagine that the centre backs from our first three games are probably like, ‘I’d like to see that guy taken off’. Sub him. Get rid of him. He’s scored two goals in three games, so he’s doing well.”

The action continues apace for TSS Rovers. Their first journey south of the border sees them taking on Portland Timbers U23s in Salem tonight (kick off at 7pm. Live stream HERE), before heading home for their third game of the season against Calgary Foothills at Swangard on Friday night.