The pitfalls of doing a lot more commentary for the end of the college season, and other work commitments, is that unfortunately we’ve not had the time to devote to our coverage of the local leagues on the site, and that’s also meant not being able to get out to any Vancouver Metro Soccer League (VMSL) matches. But with everything now calmed down, we can get back into the full swing of everything, and there’s no better time than with the league being at the halfway point of the season.

Our last weekly VMSL round-up came at the end of the week 5 matches. Six gamedays later and things have certainly changed!

Six weeks ago Croatia SC led way at the top of the standings, unbeaten and holding a narrow one point lead over VUFC Hibernian. At the bottom, Columbus were two points adrift on a single point and looking for their first win, while everyone else was just a good or a bad run of form from getting themselves very much involved in the championship and Provincial Cup picture or being dragged into a relegation dogfight.

The team that has put that excellent run together best has been Coquitlam Metro Ford Wolves, who have taken 16 of the 18 points available to them on their way to a nine match unbeaten stretch to storm up the standings and command a four point lead at the top over a Croatia side that has stuttered after their good start but who are still very much in the thick of things.

The Wolves’ latest victory came last Thursday when they faced a first versus third match up with Inter EDC at the Charles Best turf in Coquitlam and came away 1-0 winners thanks to Carlo Basso’s goal, his ninth of the season, four minutes into the second half. Inter finished the match with 10 men after Nic Apostol picked up a second yellow in the 65th minute.

That win sees Coquitlam head into Week 12 with a four point lead at the top, with a mouthwatering match in prospect against fourth placed BB5 United CCB at Cunnings Field in Coquitlam on Friday night. The defending champs sit eight points back but have three games in hand after being away at the Challenge Trophy and a power failure at Newton. A win for either side will see them as favourites for the run-in to come.

BB5 have only completed four matches since our last update, recording two wins and two draws. Saturday afternoon saw them play out an entertaining 3-3 draw at Port Moody SC on the Trasolini turf, with neither team able to get a foothold on the game and pull away.

Farivar Torabi put BB5 ahead in the 27th minute but their lead was to last just four minutes before Jacob Low levelled for the home side. Jordan Low then put Port Moody ahead five minutes before half time before BB5 hit back with a Bobby Jhutty goal in the 57th minute. Riley Pang put the Surrey side ahead in the 78th minute but Mateo Brazinha tied things up again for Port Moody with five minutes remaining and both sides had to settle for a point.

Croatia sit second in the table now after seeing their unbeaten record disappear in a 2-0 loss to Coquitlam Metro Ford Wolves on October 14th. A 3-0 loss to Inter the following week then a 2-2 draw with BB5 the week after saw the chasing pack close the gap and in Metro Ford’s case overtake them, but they’ve steadied the ship taking seven of their last nine points.

Their latest match came last weekend when they drew 1-1 with Columbus FC. After a tight first half, it was Columbus who opened the scoring two minutes before half time when Alexander Lazazzera got onto the end of a free kick into the six yard box to fire home. Croatia got the equaliser their play deserved six minutes from time through a Nicolas Espinosa header, but they’ll feel that was two points dropped as opposed to one earned.

You can see our highlights from the match on our YouTube channel.

That point kept Columbus second bottom of the table but within touching distance of safety after a good run of form that has now seen them undefeated in their last five matches, taking nine points from two wins and three draws.

It’s form that SFC Pegasus would dearly love to find. The Surrey side now sit four points adrift at the bottom of the table after their latest loss, a 3-2 home defeat to BCT Rovers Hurricanes. Aside from their 9-0 shellacking by Metro Ford, the Horsemen have been very much in every match and they took the lead in this one through a 19th minute goal from Maslah Hassan Farah. Nick Soolsma tied things up in the 26th minute but Gurmaan Jhaj put Surrey ahead again four minutes later.

Soolsma brought the Hurricanes back level from the spot in the 39th minute and that was how it stayed until the Dutchman grabbed his hat-trick and the winner in second half stoppage time.

Pegasus have a lot of work to do to turn things around in the second half of the season, but they’ve been there before and are just five points from safety in a league where everyone has been taking points off pretty much everyone else for the most part.

The Hurricanes could also yet be drawn into a relegation dogfight themselves, sitting just two points above the danger line after a mixed run of form. The win over Pegasus was their first in six games but they have a game in hand and could also still be battling for a Provincial Cup place come the end of the season.

Westside are just about keeping their heads above water, sitting third bottom. Seven points from their first three games after our last recap has been followed by just one from their next three, and that came against the league leaders Metro Ford. They went down to a 2-0 defeat at West Van on Friday night, with both goals coming in the second half. Bryce Millway put the Amblesiders ahead in the 51st minute, with Fergus McDonald securing the points with the second in the 68th.

The other game last weekend saw Coastal get three big points with a surprise 2-0 home win on Saturday over VUFC Hibernian, who will be soon welcoming aboard all their top UBC Thunderbirds talent. Taylor Richardson opened the scoring for Coastal in the 56th minute, with Brede Kidd sealing the deal with three minutes remaining.

So all of that action leaves the VMSL Premier Division standings as follows at the halfway point of the season for most of the sides: 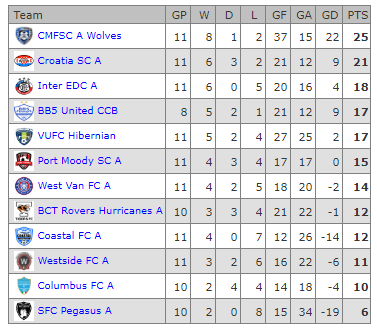 A lot to still to play for at both ends of the table and in terms of Provincial Cup berth positioning. There’s some good games lined up for this weekend. Here’s what’s on the slate.

You can find all the latest results, fixtures, and standings across all of the divisions on VMSLsoccer.com and catch highlights from other recent matches on the Sports Revolution YouTube channel.