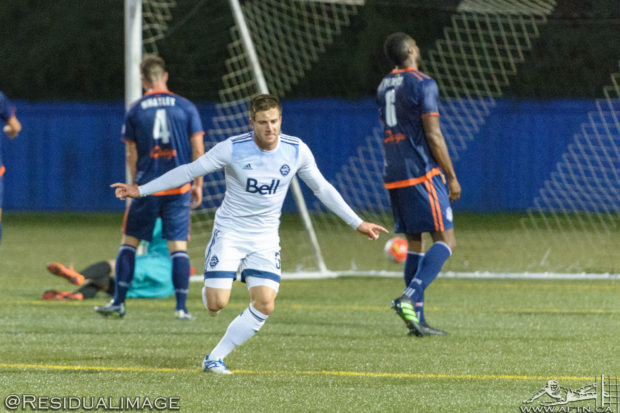 Daniel Haber is the only ever present on WFC2’s team this season. With over 1600 minutes clocked, the 24-year-old Canadian striker leads the team with four assists and sits second in goals with seven, three behind leading scorer Kyle Greig.

Haber struck his seventh goal of the season in Saturday’s 1-1 draw with Seattle Sounders 2, a second half goal that gave the ‘Caps a share of the points. After a gruelling spell of road games that has seen WFC2 away from home for six of their last seven matches, it was good to be home, although disappointing not to come away with all three points after having the better of the match against the Sounders.

“I’m proud of the group,” Haber told AFTN after the match. “I know we’ve had a long week of travel. In the [Seattle] game I thought we came out with energy, which was good. We weren’t able to bury one in the first half, and we were unlucky to concede, but I’m happy we came out with that performance in the second half. It showed our guts and I’m happy that we got at least one point out of it.

Haber initially looked surprised when his shot went in, a crisp low diagonal into the bottom left corner of the net. But it wasn’t so much in surprise, as making sure that he’d beaten the offside trap and the goal was going to count, after a neat one-two with Marco Bustos and a fantastic finish.

“I was looking around to see if the offside flag was up,” Haber admitted. “It was sort of hard to tell where the last defender was. With the one-two, I sort of had my back to goal. I knew where I was aiming and I was just glad to see it hit the mesh.”

WFC2 had 14 shots in Saturday’s draw. Only two of them were on target, and it felt like they were trying to walk the ball into the net too much at times, allowing Seattle to get men around them and close them down. It was something head coach Alan Koch noted after the match, feeling that “It doesn’t have to be 10, 15, 20 passes before you score a goal. Sometimes it has to be a little bit dirty”.

With the season run-in ahead, and with WFC2’s defence looking shakier than it did to start the campaign, the ‘Caps know that they need to be more deadly in front of goal in the coming weeks to make sure that they’re securing the full three points and not having to settle for a solitary one.

“Sometimes the players on the field, we just have to solve what the defence is showing us,” Haber added. “There are different moments in the game where we can build it up, but I thought we did well here. 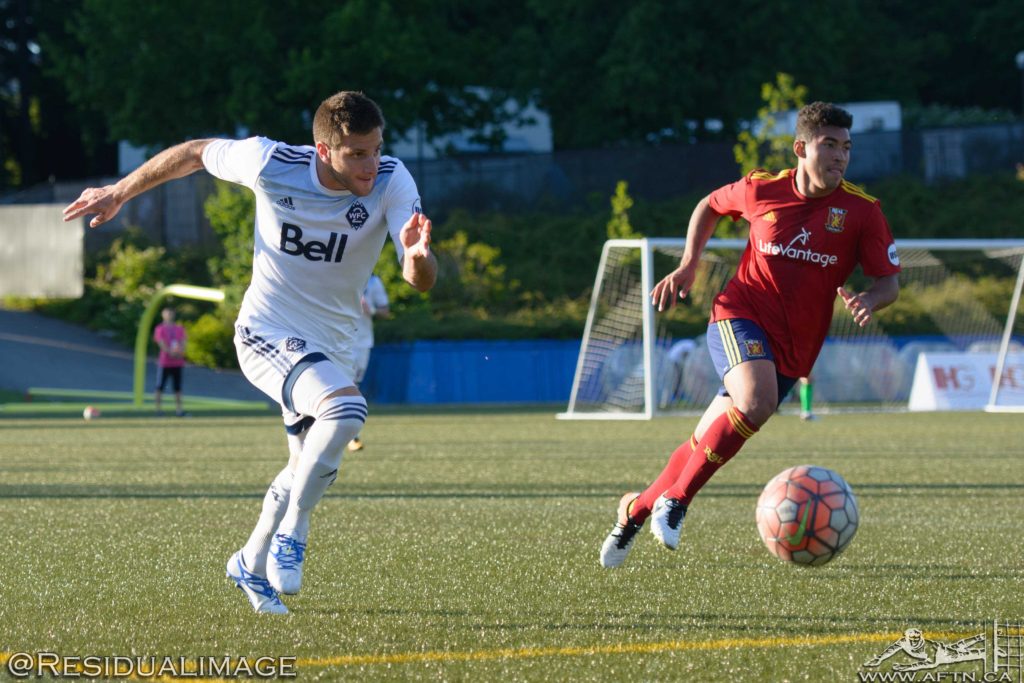 Haber came to Vancouver mostly know from playing as an out and out striker up top. With Vancouver’s favoured 4-2-3-1 formation, and the form of Kyle Greig, the Toronto native has played most of his season out on the wing, coming inside and changing formation when needs dictate.

It’s a role he’s been comfortable taking on, and the results have been positive.

“As a football player, you have to be able to do whatever the coach asks from you on any given day,” Haber feels. “So far this season, I’ve been asked to play on the wing, so I’ve adopted that role and done the best I can do. Obviously I try and contribute offensively when I can, but it’s a two way game and you’ve got to do the defensive role as well. So, whenever I’m asked to play on the wing, I’ll do the best that I can.”

Haber’s form this year saw him earn the first of four available call-ups to the Whitecaps first team, playing the final 11 minutes in last month’s friendly against Crystal Palace. Robinson has liked what he’s seen from the young Canadian this year, and although Haber wasn’t one of the four USL guys to get a call-up to last week’s Champions League game in Trinidad, you have to expect that he will get a look in during some of Vancouver’s remaining three games in the group stages of the competition.

Haber has been the in-form WFC2 attacker of late and has now hit goals in back to back games. Although he wasn’t part of that CCL win over Central FC, he was delighted for those that were (Spencer Richey, Brett Levis, Sem de Wit, and his attacking partner Kyle Greig), and gives him that added boost and spur to take to the field with the first team again himself.

“It gives you extra motivation,” Haber told us. “We’re all here for a reason and that’s to push forward. If you didn’t love the game and you didn’t want to be the best that you can be, you wouldn’t be playing at this level. We’re all happy for them. We see them every day in practice giving everything they have and it’s nice to see that they get rewarded for their good performance on the field.”

Saturday’s draw, along with LA Galaxy II’s late implosion at home to Portland that saw them give up a 3-0 half time lead to lose 4-3, keep WFC2 atop the USL Western Conference standings, extending their lead to two points ahead of this week’s matches.

With six of their remaining eight regular season games at home, WFC2 should be set for a strong finish and high playoff positioning. Despite the excitement here at AFTN about could lie in store in the postseason for this team, no-one at the club is admitting to table watching or getting too far ahead of themselves right now.

“I can’t speak for the other guys, but I know for myself the focus is always just on the games ahead,” Haber told us. “I know everyone on this team is trying to push forward and be the best that they can be. Just look ahead to the games that we have in front of us and to always try and get three points. The table will take care of itself.”