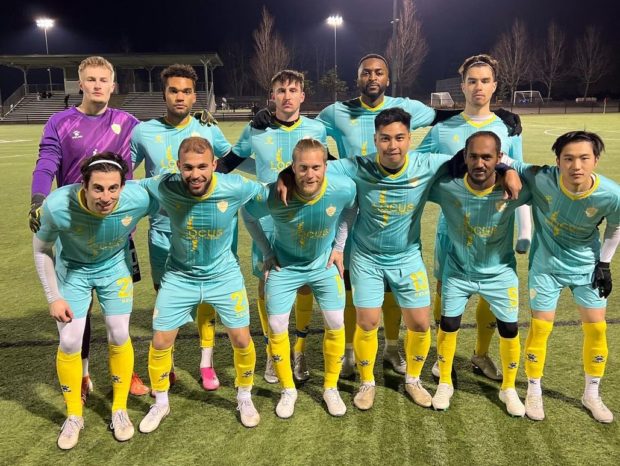 BB5 United CCB clinched their first Vancouver Metro Soccer League (VMSL) championship on Friday night, racking up their 14th victory of the season and winning the title with four games to spare.

The Surrey side have been dominant this season, suffering just one defeat on their way to the title. Their latest victory saw them face off with second placed VUFC Hibernian at Newton Stadium, with a Nic Morello double giving them another three points and clinching the championship in the process in a 2-0 win.

Morello had BB5 ahead just five minutes in, pouncing on a loose ball six yards out after the VUFC keeper was unable to hold onto a shot from the edge of the box.

There weren’t a lot of clear cut chances in this one, on a chilly night in Surrey, but Morello warmed the cockles of the home side and put the game to bed with 13 minutes remaining, when Caleb Clarke squared the ball along the six yard line and Morello had the easy task of sidefooting into an empty net.

VUFC hit the post late on but that was all she wrote and BB5 celebrated winning the title at the final whistle as they now look to try and make it a double, and maybe even a treble, in cup action.

Elsewhere in the Premier, the battle for positioning and Provincial Cup berths is really heating up, as is the fight to avoid relegation.

Despite their defeat, Hibernian are still second in the standings and there’s a real dogfight behind them now with just three points separating 3rd to 6th. The top four in the Premier are guaranteed a Provincial Cup spot, as are the two Imperial Cup finalists, but depending on who the latter are, the 5th and 6th teams in the league come into play for one of those.

Coastal are currently in 3rd on 37 points with one game left to play following their 4-1 win over Burnaby Selects White Eagles at Burnaby Lake on Sunday. Jake Starheim gave Coastal the lead in this one eight minutes before half time. and the White Eagles task was then made all the harder six minutes after the restart when Ievgen Lytvynenko was sent off for a second bookable offence.

Lucas Rimmer doubled Coastal’s lead in the 57th minute, but Serhii Akulinov pulled one back for the Burnaby boys four minutes later to give them some hope. Starheim hit his second of the night in the 70th minute and Brede Kidd scored with eight minutes to go to seal the three points, boosting Coastal’s Provincial hopes and keeping the White Eagles in the relegation battle.

Coquitlam Metro Ford Wolves jumped up to 4th after a huge 7-1 win over bottom side MAFC Elite at Cunnings Field on Friday night.

MAFC actually took the lead through Kareem Shouhdy eight minutes in before Metro Ford took over. Ryan Ashlee tied things up in the 20th minute then Kyle Jones gave the home side a 2-1 lead at the half 11 minutes later.

Sang Hwang made it three in the 55th minute, with Juan Sanchez making it four two minutes later. Hwang hit his second of the game midway through the second half before a Carlo Basso brace in the 78th and 83rd minute rounded off the scoring.

The defeat all but relegated MAFC, who are nine points from safety with three games left to play.

The big losers this past weekend, in terms of positioning, were Inter EDC who fell from 3rd to 5th following a 1-0 loss at home to West Van FC at Burnaby Lake on Friday night. Paul Kelly got the only goal in this one and it gives the Amblesiders a glimmer of hope for a top six place, where they currently sit eight points back from but have two games in hand.

BCT Rovers Hurricanes continued their strong end of the season and made it three wins on the bounce with a 3-0 win over relegation threatened NVFC Norvan at Newton on Friday night to consolidate that 6th place in the table with one game to go.

The Golden Boot leading Nick Soolsma grabbed his 26th of the season to put the Hurricanes ahead in the 35th minute, with Rahid Rahiem doubling their lead two minutes before half time. Javid Khan rounded off the scoring in the 78th minute to secure the three points for the Surrey side.

Croatia SC all but saw their top six hopes disappear at Burnaby Lake on Sunday afternoon, going down to a 2-1 defeat to SFC Pegasus, who boosted their own survival hopes in the process.

Emile Saimovici gave Croatia a 4th minute lead and they held on to that until three minutes past the hour mark when Amitoj Arora brought Pegasus back on level terms. Ten minutes later and the Horsemen were ahead through Gurmaan Jhaj, and it was a lead they weren’t to give up.

That victory gave Pegasus a three point breathing space over second bottom Norvan in the standings, good enough to avoid automatic relegation and moving them to within one point of the White Eagles to avoid the relegation playoff as well.

Croatia may now have to rely on a deep cup run if the former Provincial Cup champs are to even make it into this year’s competition.

Here’s how the VMSL Premier standings are looking as the season winds down: 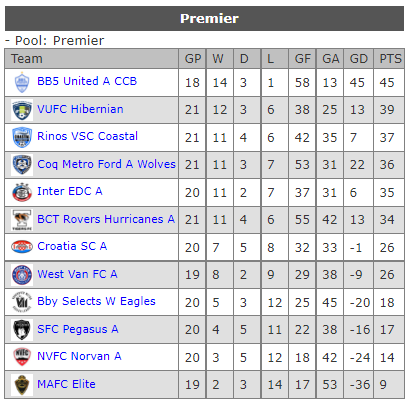 The Premier action is put on hold for a week as attention turns to the Imperial Cup quarter finals, with a few of the teams’ last hopes for making the Provincial Cup relying on reaching the final and a couple of other Premier sides hoping they don’t.

Here’s what’s on the slate this weekend: