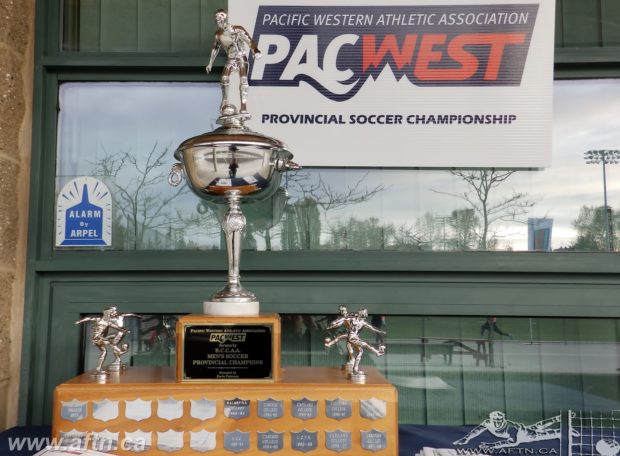 It was an entertaining afternoon of local college soccer action at Burnaby Lake on Friday in the semi-finals of the 2016 PACWEST championship.

At the end of it all, Capilano College Blues and Douglas College Royals with battle it out for the title on Saturday night.

Douglas were made to battle all the way by VIU Mariners in their semi-final and when they look back at the game tape they’ll wonder how they made it so difficult for themselves in the end after giving up a two goal lead and being taken to extra time and penalties by a Mariners side that played around 90 minutes with ten men. 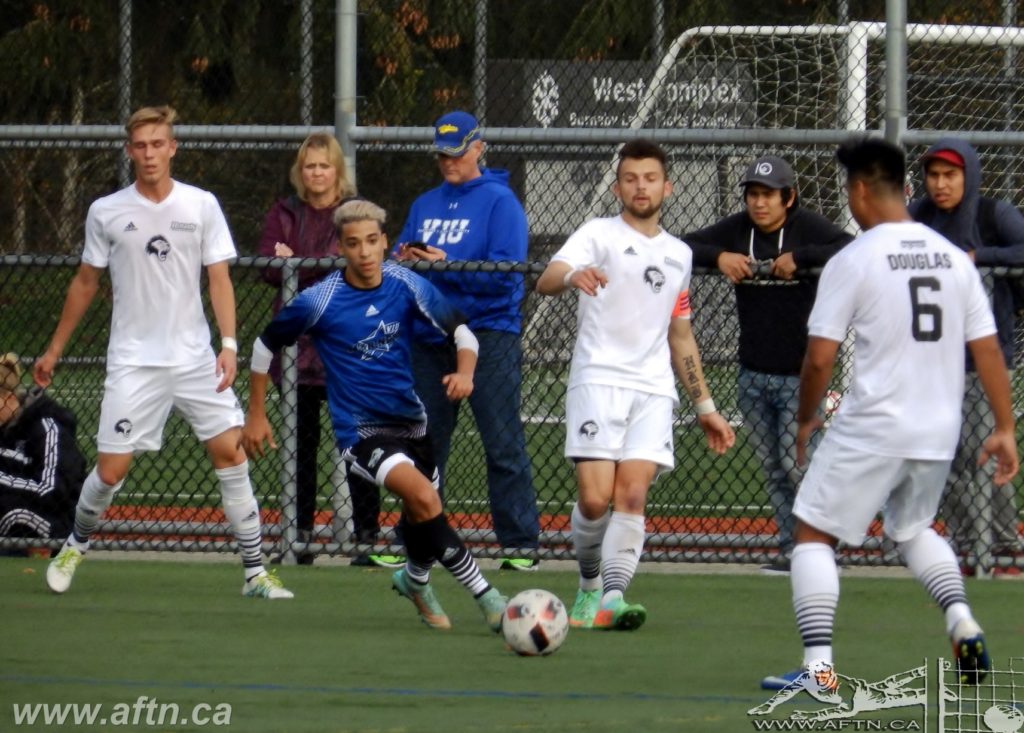 Douglas had a great chance to open the scoring in the 12th minute when Issac Kyei burst into the box and was sent crashing to the deck. Nick Pindea Graham stepped up to take the spot kick but Mariners keeper David Turkstra produced a great save to keep the teams level.

Graham made up for his miss six minutes later when he fired home from close range after a scramble in the Mariners box from a corner and when Kyei made it 2-0 in the 29th minute, it looked like Douglas would be coasting.

But VIU hit back seconds later when they broke up the field from the restart and Shun Takano pulled one back immediately.

VIU were reduced to ten men shortly after for a second bookable offence and it looked like being a huge ask for the islanders to get back into this one.

Douglas were dominating the match, helped in a large part by that man advantage, but they couldn’t make their possession pay with more goals, although they did have one disallowed for offside at the start of the second half.

While the Royals were being let down by their finishing, the Mariners proved more clinical and VIU shocked Douglas in the 69th minute when Takano beat Jared Horvath at his near post to tie things up at two apiece.

It was Takano’s second of the match and showed just why the Japanese midfielder was named the PACWEST Player of the Year this season. 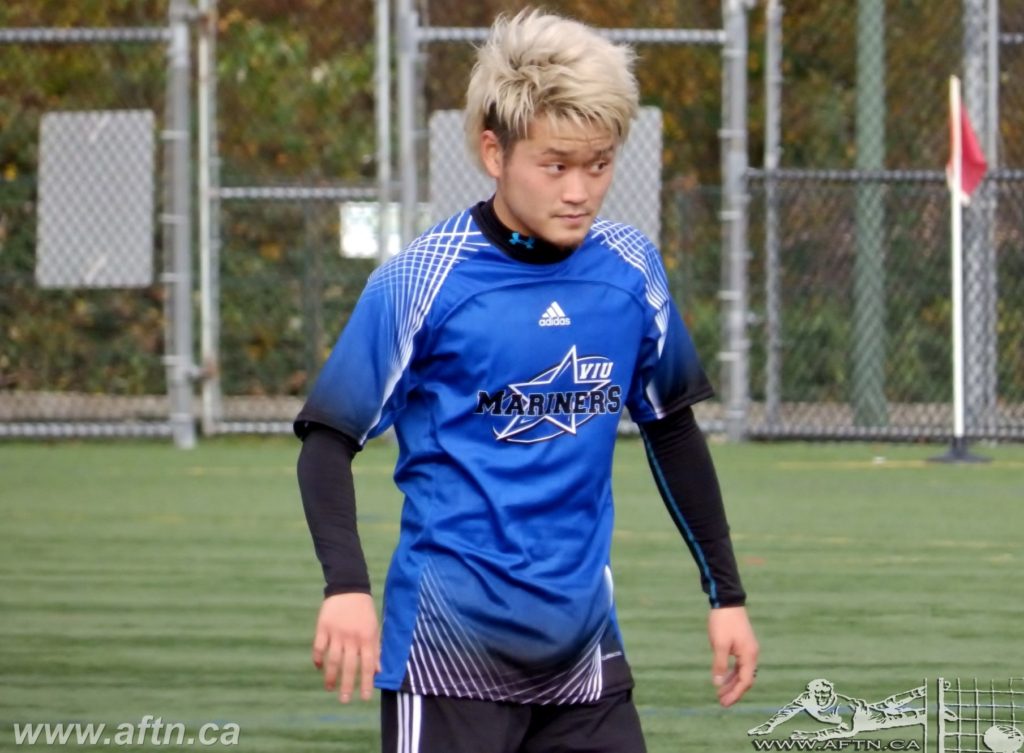 It was cagey for the rest of the 90 minutes, with neither team wanting to make a mistake, and that continued for most of extra time as well, with VIU having a chance late on to grab a dramatic winner.

But neither side could and the game headed to penalties.

VIU buried their first four spot kicks, but Whitecaps Residency alumni Mark Baldisimo blasted Douglas’ first one high and over, before the Royals scored their next four. That left Mateo Kostering with the chance to win it for VIU, but he also blasted over and the teams headed to sudden death tied at 4-4.

Both teams scored their next penalties, but when Bill Bagiopoulos saw his kick saved by Horvath it looked like curtains for VIU, only for Matthew Pierre to have his shot superbly saved by Turkstra, after a crazy long delay while the referee made him put in his shinpads.

As we entered the eighth round of kicks, Miguel Banting blasted wildly over for VIU leaving it up to Juggy Bassi to send Turkstra the wrong wait to clinch it 6-5 on penalties and send Douglas College through to the Championship game and ending a wild one.

You can see two of the goals (Douglas’ first and VIU’s second), the missed penalty, the disallowed goal, some close calls, and the full penalty shootout in our video below.

The victory sends Douglas College through to Saturday night’s Championship game where they’ll face last year’s winners Capilano Blues. No matter the outcome of that match, both teams will now head to Fort McMurray for the Canadian Collegiate Athletic Association (CCAA) championships between November 9th and 12th.

If there’s any consolation for VIU, it’s that at least they know they’ll be at next year’s CCAA nationals as they’re hosting them in Nanaimo.

It’s been a fantastic season for Capilano. Building on last year’s success, the Blues went unbeaten during the regular season with a 10-0-2 record, finishing 10 points ahead of second-placed VIU and 15 points ahead of fellow finalists Douglas.

That’s given them a number two national ranking by the CCAA, behind the number one ranked Humber Hawks, and they’d like to head to next month’s nationals with their unbeaten record intact.

And they’re well on the way to that after a 5-2 win over Quest University. 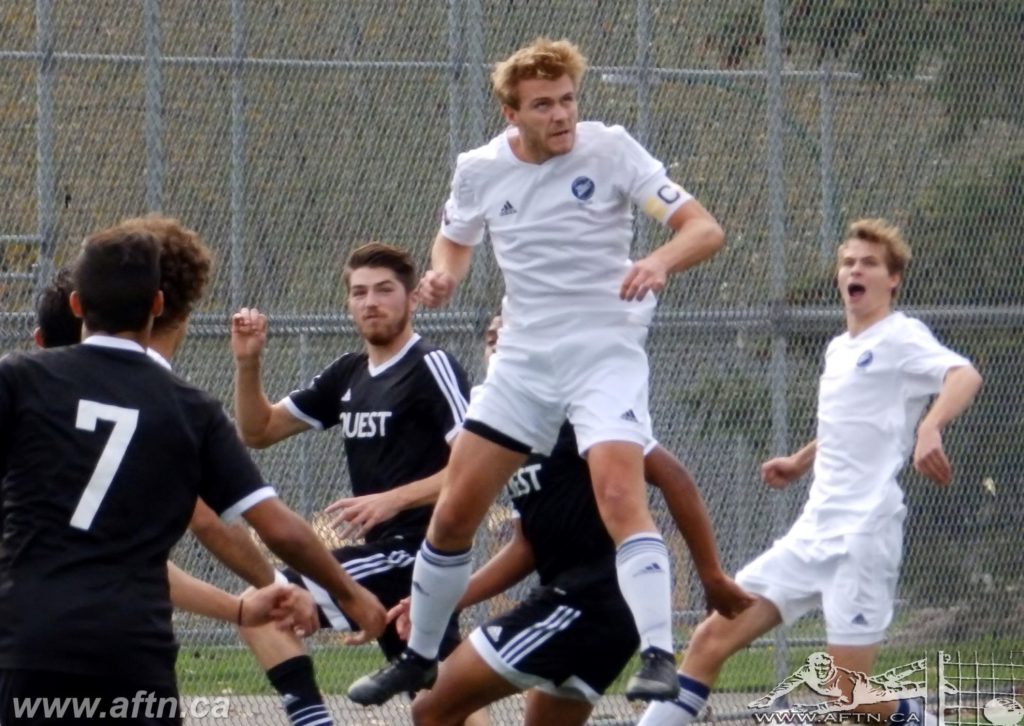 Quest Kermodes were no match for Capilano in Friday’s semi-final, although the underdogs did push the Blues hard in a strong first half showing, before Capilano’s class came through.

The Blues were two up within the first 15 minutes. Edris Najm set Capilano on their way when he fired home a free kick just three minutes in and top scorer Keith Jackson soon doubled their lead.

If it was already looking like a rout, then Quest had other ideas and they pushed Capilano hard to get back into the game, and they got their breakthrough two minutes before half time when Jeremy Monn fired home this thunderous free kick.

Jackson grabbed his second of the game five minutes after the restart to give Capilano their two goal advantage back, and Adam Logan increased it further two minutes before the hour mark.

Monn got his second of the game in the 71st minute to give the Kermodes a faint glimmer of hope, but that wasn’t to last long when Omar Rostant got in on the free kick fun to make it 5-2 six minutes later.

Capilano will now face Douglas for the PACWEST title at Burnaby Lake on Saturday night. The game kicks off at 8pm and if you can’t make it along, you’ll be able to watch it on the PACWEST website.

You can see our all of our photos from Friday’s PACWEST semi-finals HERE or in our Flickr slideshow below.