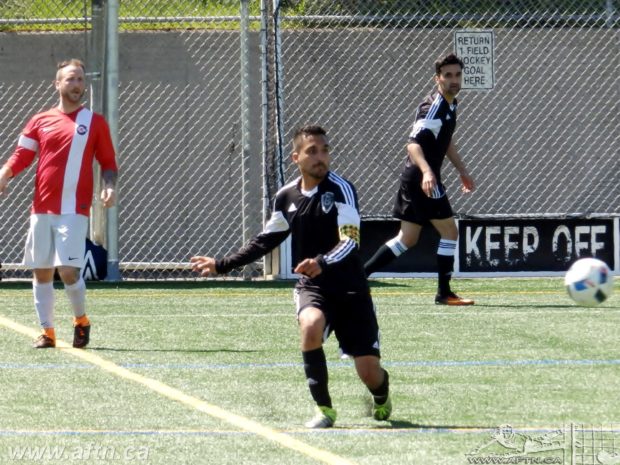 It was a week of drama in the 2017 BC Provincial B Cup, both on and off the pitch.

With the Keith Millar Cup semi-finals seemingly all set for this coming weekend, after four hard fought quarter-final match ups, word broke on Sunday night that Fraser Valley Red Devils were launching an appeal with regards to their 2-0 loss to VMSL Division 2A champions, and our cup favourites, Burnaby Metro Athletic.

The appeal was in respect of Burnaby Metro Athletic fielding an ineligible player. One who had also been registered with a Division 4 team in the FVSL and who had just happened to have played against the Red Devils in a President’s Cup game. The player in question had been sent off in that match, so was easily recognised by the Fraser Valley side.

The BC Soccer Protest Panel met to discuss the situation on Monday and after reviewing the evidence, kicked Burnaby Metro Athletic out of this year’s B Cup, reinstating Fraser Valley Red Devils, who will now advance to the semi-finals.

AFTN reached out to BC Soccer for comment and they issued us the following statement:

Upon review of all of the evidence presented to them, the Protest Panel determined that he was registered to both teams at once, and therefore was an illegal player.

A tough way for any team, let alone one of the favourites to lift the trophy, to go out of a competition, and it’s not known yet who the player is, if the club was aware of the situation, or how this may affect their VMSL Division 2A title.

It’s been a strange competition for the Burnaby side from the start, with their first round opponents, BMSL side Bacardi FC, being forced to forfeit their match with them after a player’s wedding clashed with the date the game was meant to be played and no switch of dates could be agreed.

Burnaby Metro had won their quarter-final tie with the Red Devils with little problem on Saturday afternoon at Burnaby Lake. In a game of few real goalscoring chances, Burnaby Metro were the better side throughout, taking a 42nd minute lead when the Fraser Valley goalkeeper couldn’t hold on to a shot from distance, and the ball went through his hands and over the line.

Former Whitecap Navid Mashinchi wrapped things up for Burnaby Metro Athletic three minutes from full time for the 2-0 victory. Or so they thought.

You can see our highlights of the match that never was below!

With one the clear favourites now out of the competition, all of the last four teams will fancy their chances of lifting the Keith Millar Cup on May 28th.

The North Van side came through a close battle with BMSL champs Sierra FC in their quarter-final on Sunday, coming away with a 2-1 victory.

The Greencaps saw off another FVSL side in the quarter-finals on Saturday, getting past Fraser Valley Blue Devils 3-1. Poco needed penalties to beat VMSL team FC Serbia United, winning 5-4 after the game was tied at 0-0 after 120 minutes.

Our money’s on an all-VMSL final, but it’s been a strange competition this year, so who knows what other twists lie in store.