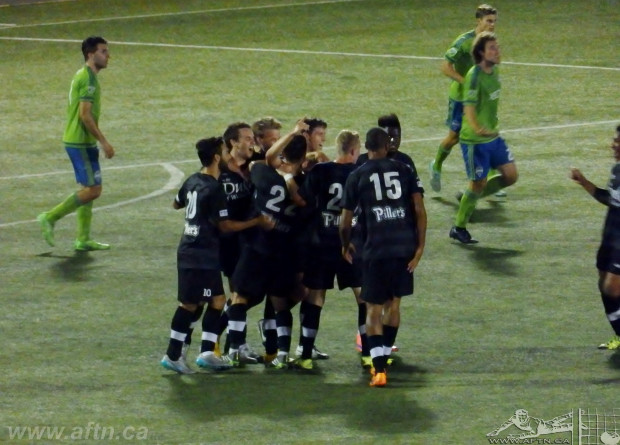 Ontario side Kitchener-Waterloo United will be playing for their first ever PDL Championship on Sunday after a dramatic stoppage time winner gave them a well-deserved 1-0 win over a tough Seattle Sounders U23 side.

The game look destined to be heading for extra time when the Sounders gave up a cheap free kick in a central position in the dying seconds of stoppage time. Up stepped Julian Buescher and the German hit a cracker past the wall and the hands of Seattle keeper Jeff Caldwell.

The last gasp win came with the last kick of the game and sparked jubilant scenes amongst the K-W United players and management and their band of travelling supporters.

It was no more than K-W deserved, after coming closing on numerous occasions during the match, hitting the woodwork three times and causing numerous goalmouth scrambles.

Leading scorer Ben Polk had a shot cleared off the goalline in the 18th minute. The rebound fell to Oyvind Alseth on the edge of the box but his shot cannoned off the crossbar. When Sergio Camargo hit the left post with a rasping shot in the 32nd minute, you wondered if it wasn’t going to be the Canadian’s day. Even more so when Polk hit the crossbar again six minutes into the second half.

Seattle also had their chances, in an entertaining and fast-paced game that was swinging end to end, with Joseph Gjertsen coming within inches of giving the host the lead five minutes in and Guillermo Delgado doing everything right to create a chance out of nothing a minute before the break, but lobbing hit final effort just over.

The Sounders were looking lively in the closing stages after bringing on sub Derek Johnson, with Whitecaps Residency alumni Wesley Cain causing Seattle problems with his pace up front for K-W, before Buescher grabbed the late winner.

“We had the better chances but Seattle were a very, very good team,” Pozniak felt. “Very organised and very quick on transitions, so it was always a little bit dangerous. But in the end, a little bit of quality and we scored a great goal.”

So when Buescher lined up that game winning free-kick, what was going through Pozniak’s mind? Was he already planning his tactics for extra time?

“No, no,” Pozniak told us. “Actually I’ve seen Julian bang those in during training all the time, so I had a feeling it was going in.” 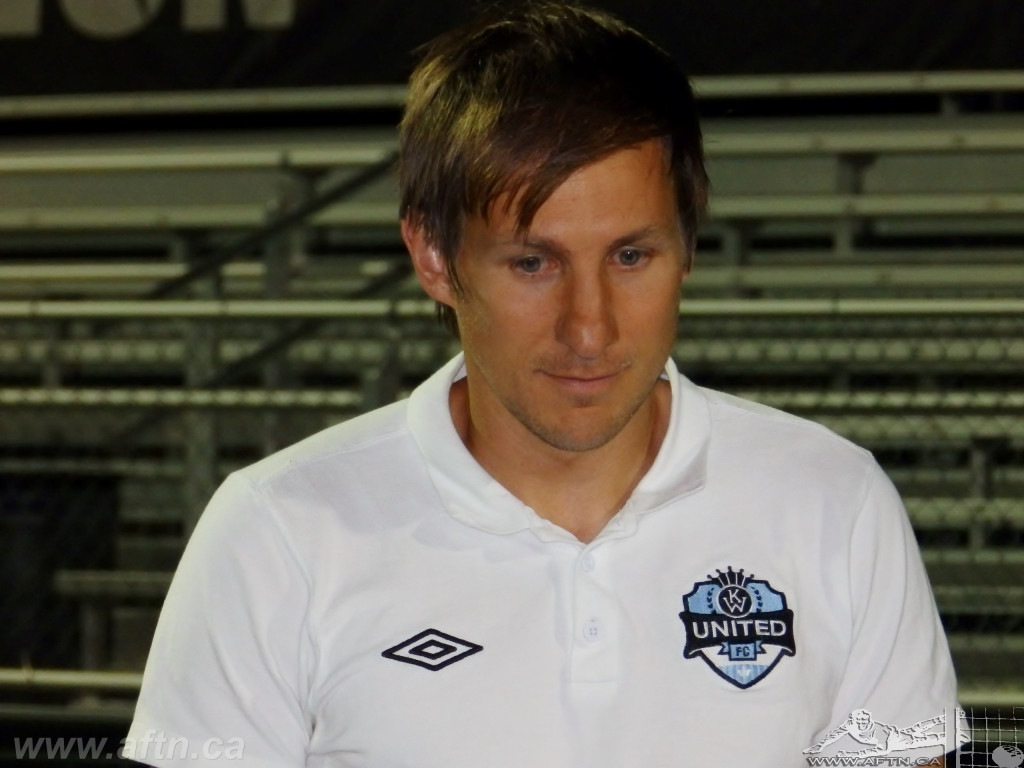 The K-W head coaching position is Pozniak’s first stint in management at the senior level and what a start to his managerial career.

Pozniak retired at the end of 2012, having played club football in five countries and being capped for Canada internationally. The defender played in MLS with Toronto FC in their inaugural season and also had a stint with Chivas USA in 2008. Many AFTN readers will also be familiar with Pozniak for the three seasons he spent with the Whitecaps from the 2008 USL Championship winning side up to 2010.

To reach the Championship game in his first season in management means as much to him as it does the players, but he puts a lot of the success down to the earlier work done by another ex-Whitecap, former PDL coach Stuart Neely.

“It’s fantastic,” Pozniak enthused. “I couldn’t have asked for a better start to coaching at this level. I’ve had great support and we’ve also recruited some fantastic players, which made it easy for me.

“We had great groundwork from the year before from Stuart Neely, my predecessor. So the returning players, who are our captains, Sergio Camargo and Nate Ingham, set the tone already. So it made my job easier the first couple of weeks and ever since then it’s gone uphill.”

But the job is only halfway done and K-W United will now face New York Red Bulls U23s in Sunday’s PDL Championship game.

The Red Bulls had a dramatic late semi-final win of their own at Starfire Stadium. Having taken an early lead, then wasting several chances to kill the game off, New York let Florida side Ocala Stampede tie things up late in the first half. The second half then became an edgy affair, with no further goals to break the deadlock.

With penalties looming, Ocala’s Anthony Arico was sent off for a lunging challenge in the New York box and the Stampede were punished when Joe Farrell hit a stunning looping effort into the next with six minutes of extra time remaining.

It’ll be a tough game, but a very winnable one and K-W United are top seeds for this Final Four.

New York won the Mid Atlantic Division and then the Eastern Conference Championship and have a number of returning players and from their successful academy.

How much does Pozniak know about them and did he get an opportunity to watch any of their semi-final?

“I got the chance to watch their first half,” Pozniak told us. “We were warming up so we didn’t see the second half (or extra time) but we’ve got a pretty good idea of how they play and what they’re about.”

The PDL Championship game kicks off at Starfire at 2pm on Sunday afternoon, with admission only $10. If you’re staying down in the area after the ‘Caps game at the Clink tonight, then get yourself along and cheer on the Canadians to lift the trophy.

Good luck to K-W United. And we’ll leave you with some photos from Friday’s semi-final win. 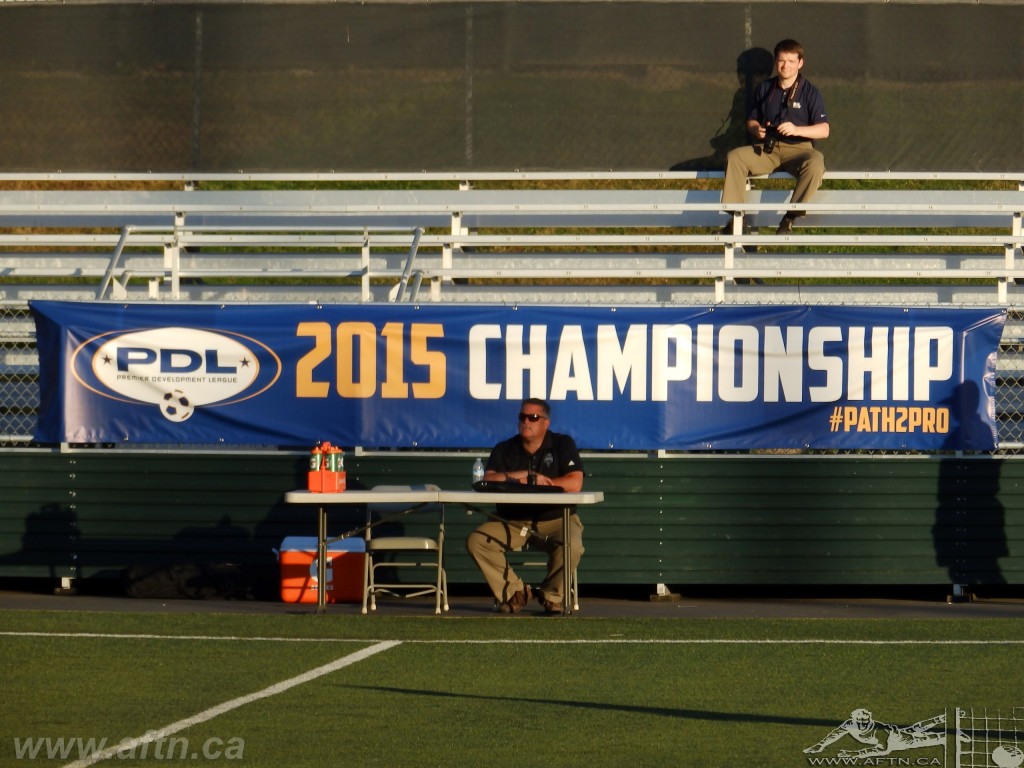 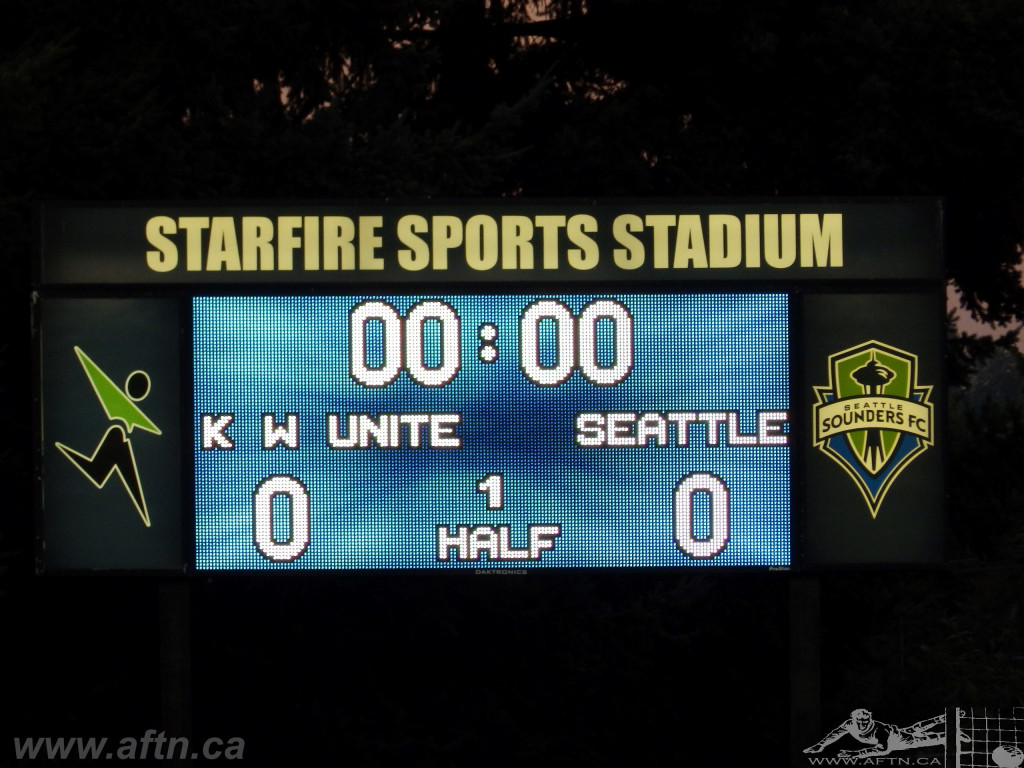 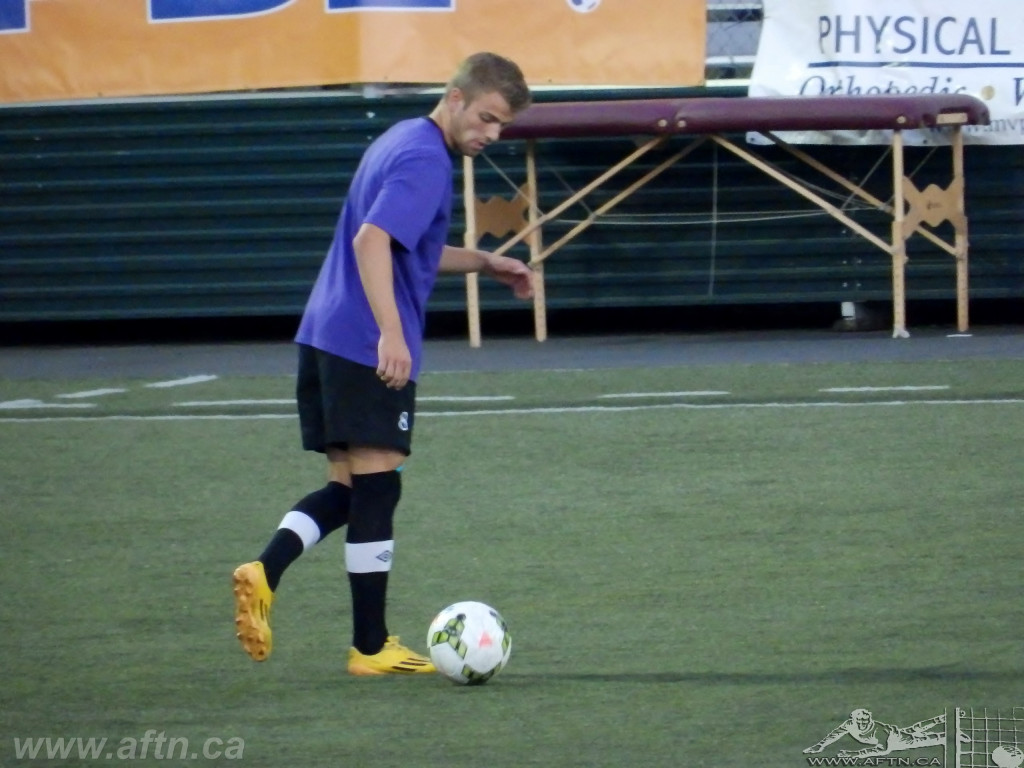 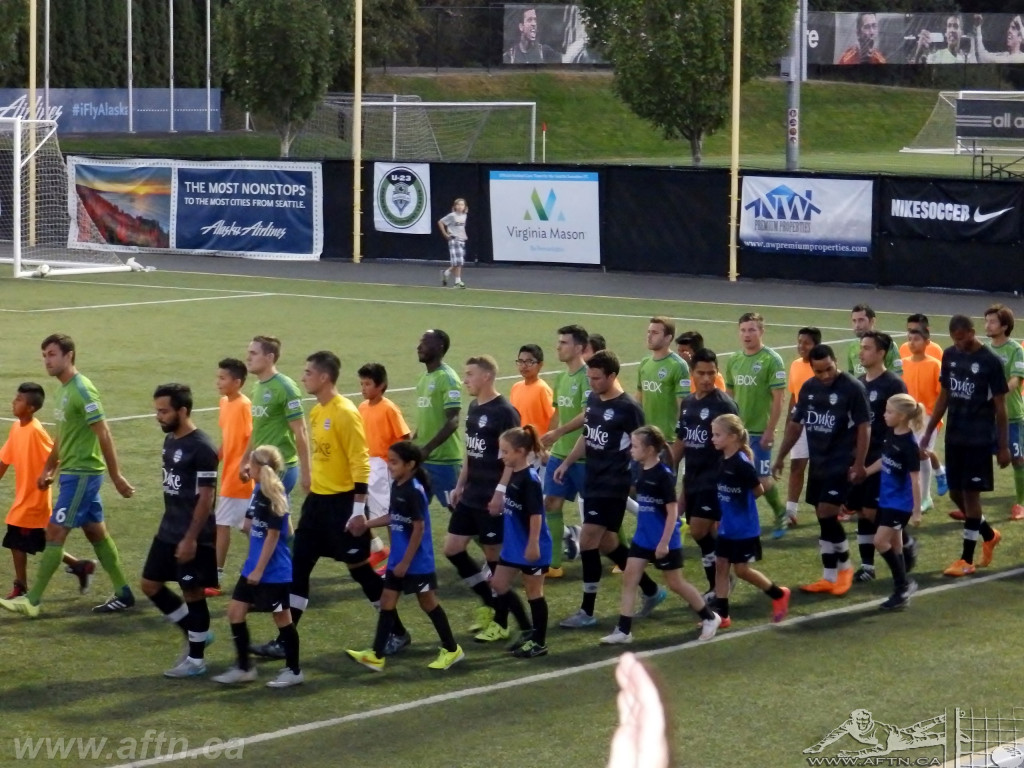 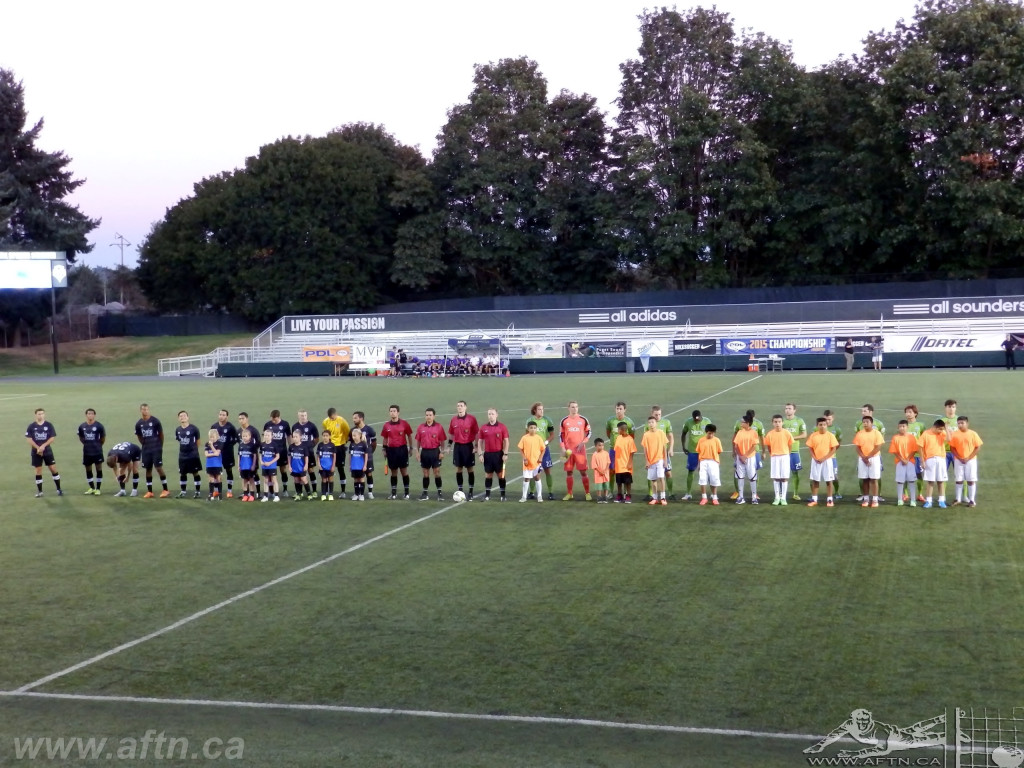 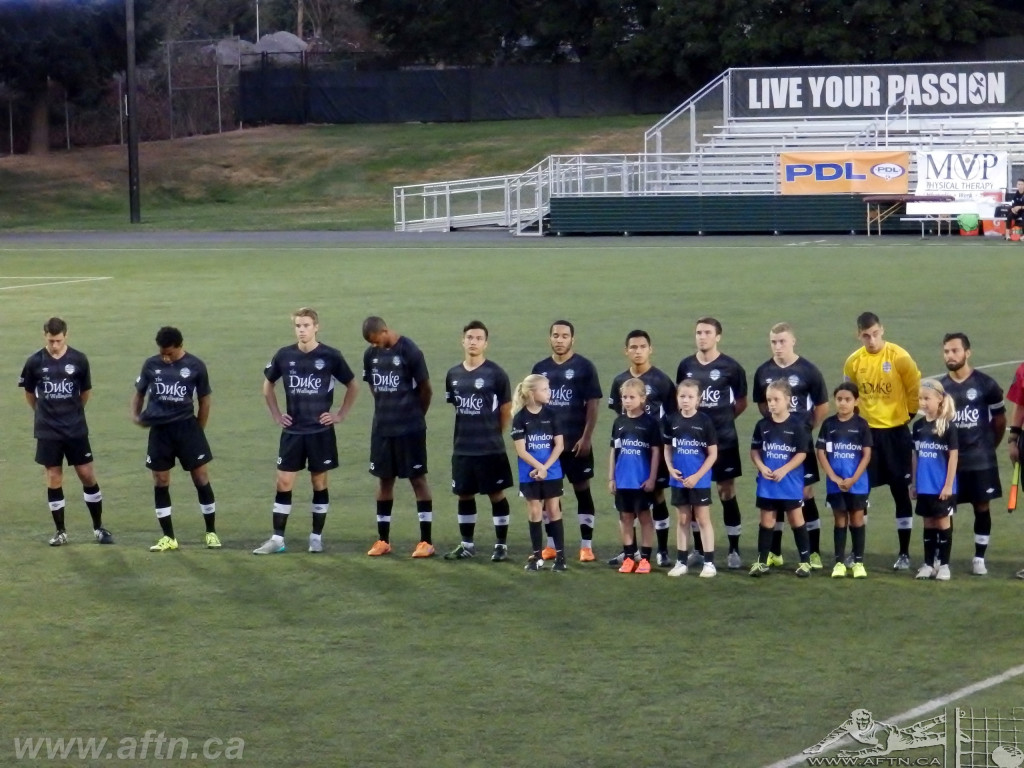 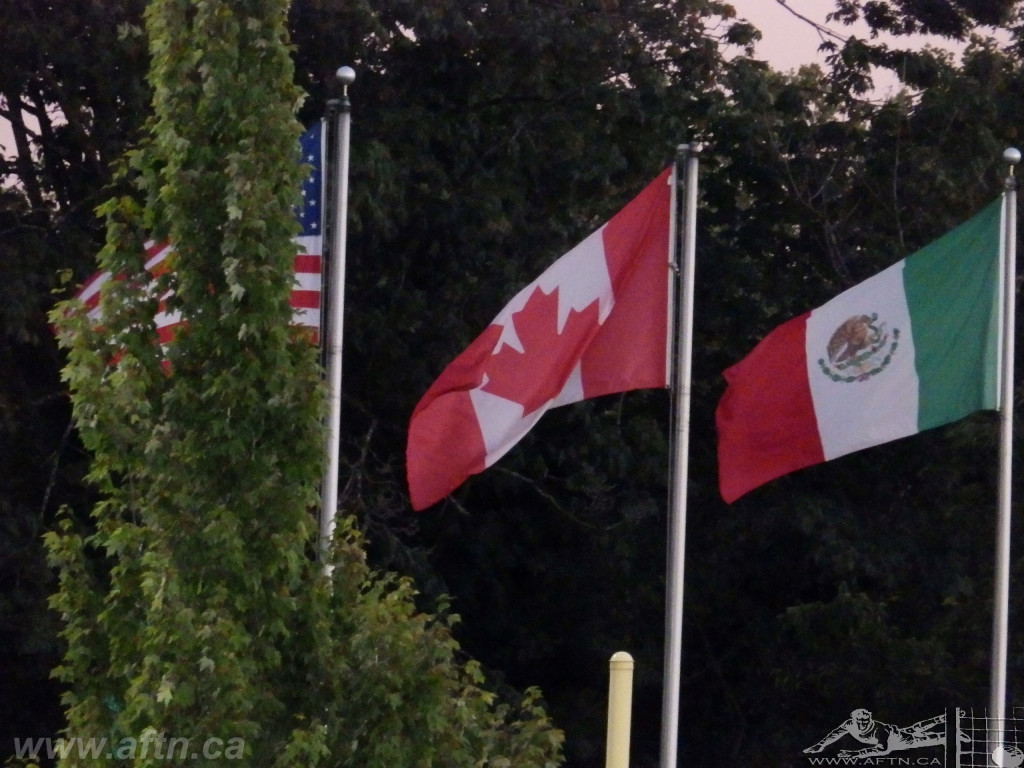 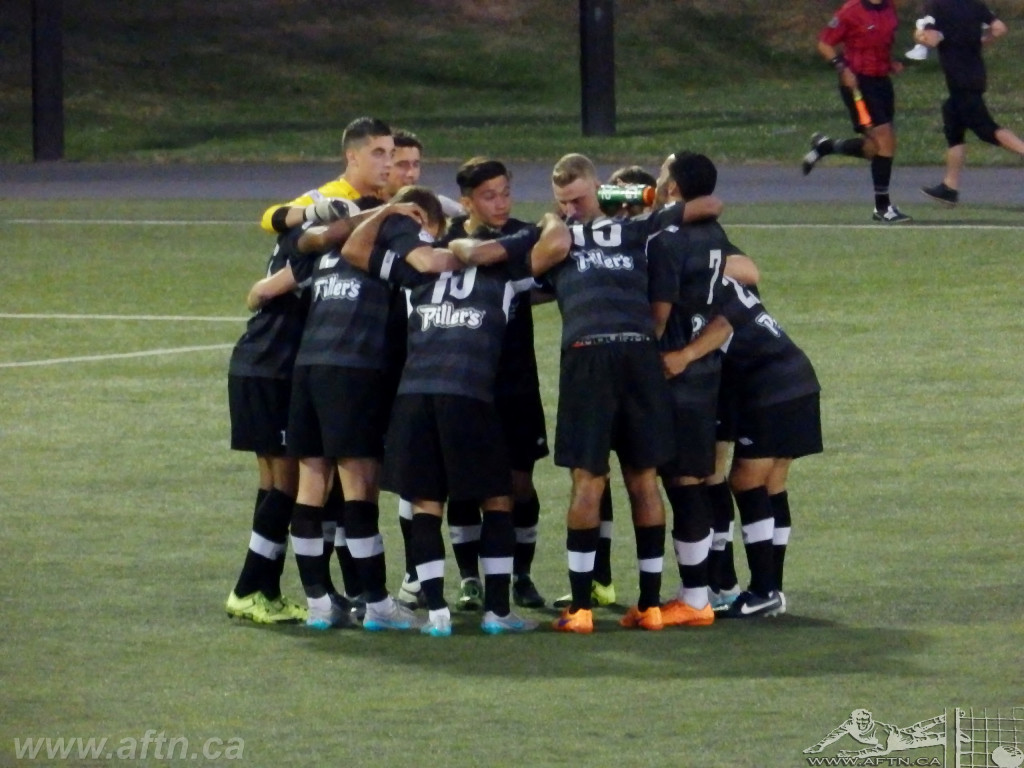 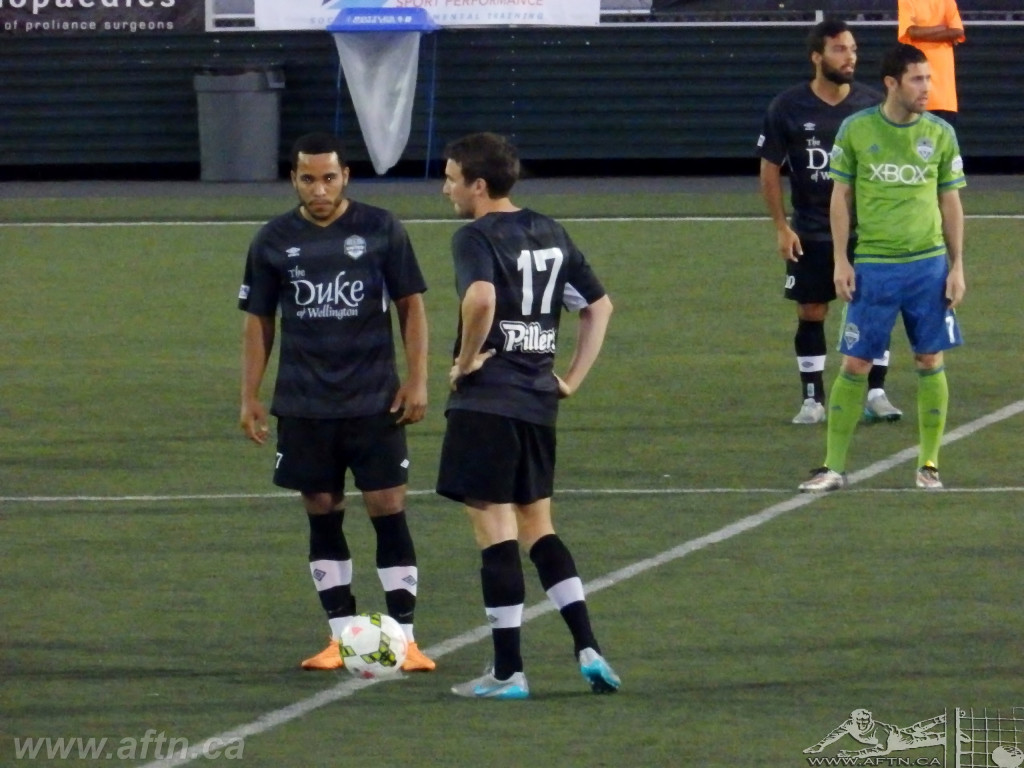 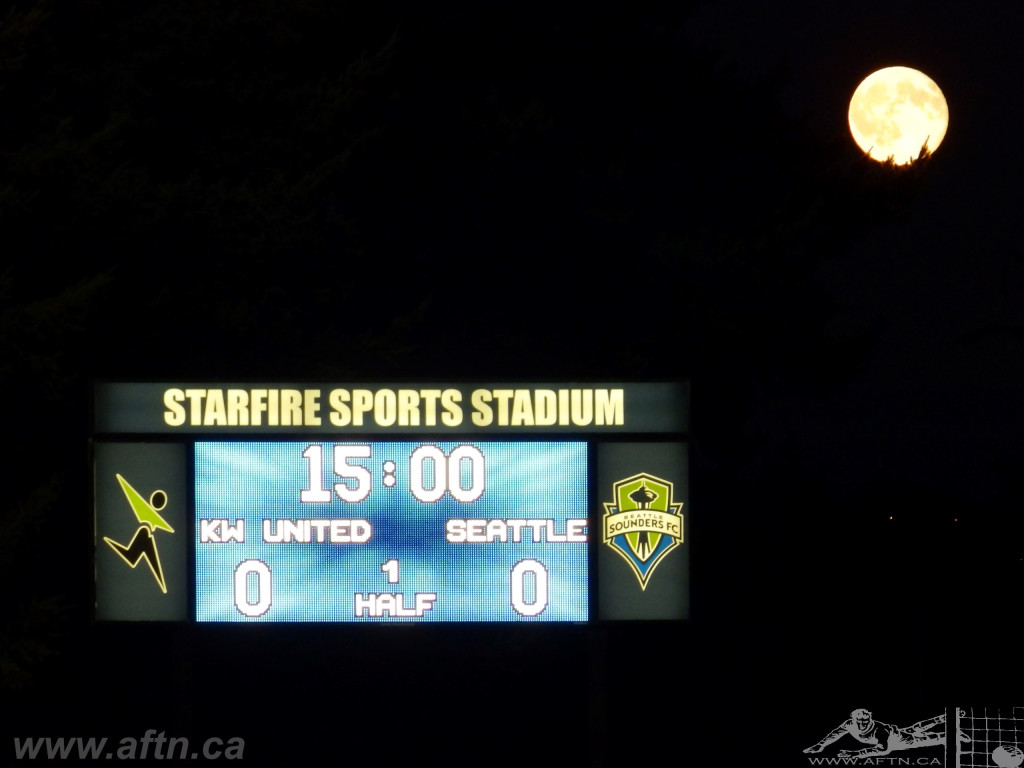 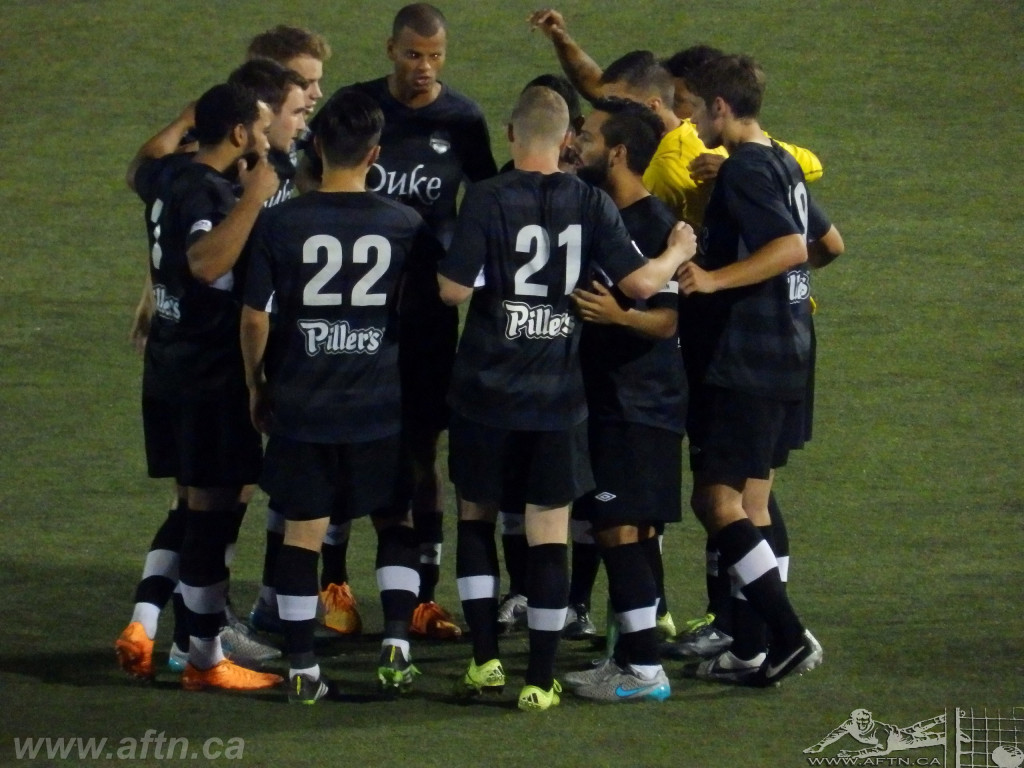 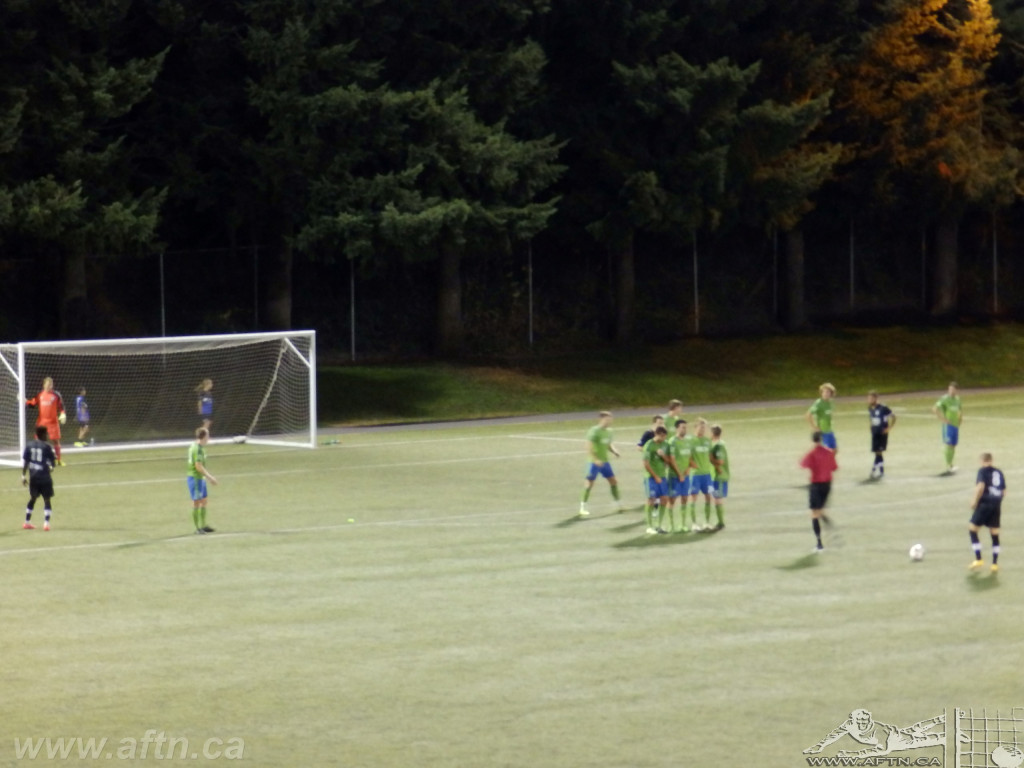 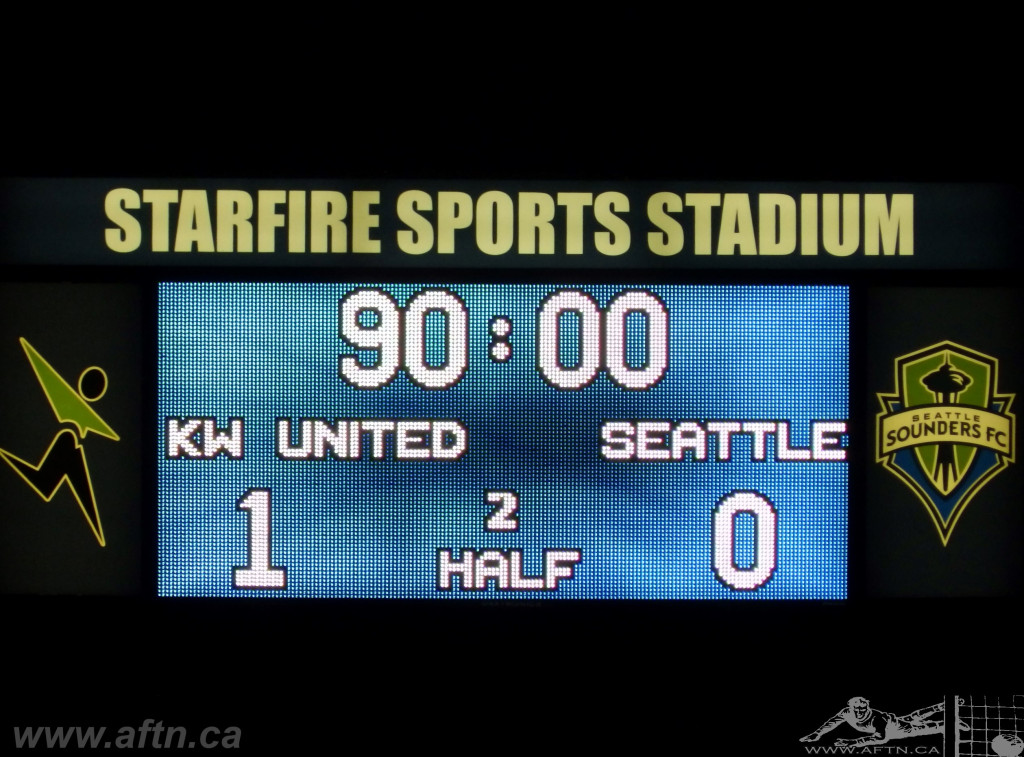 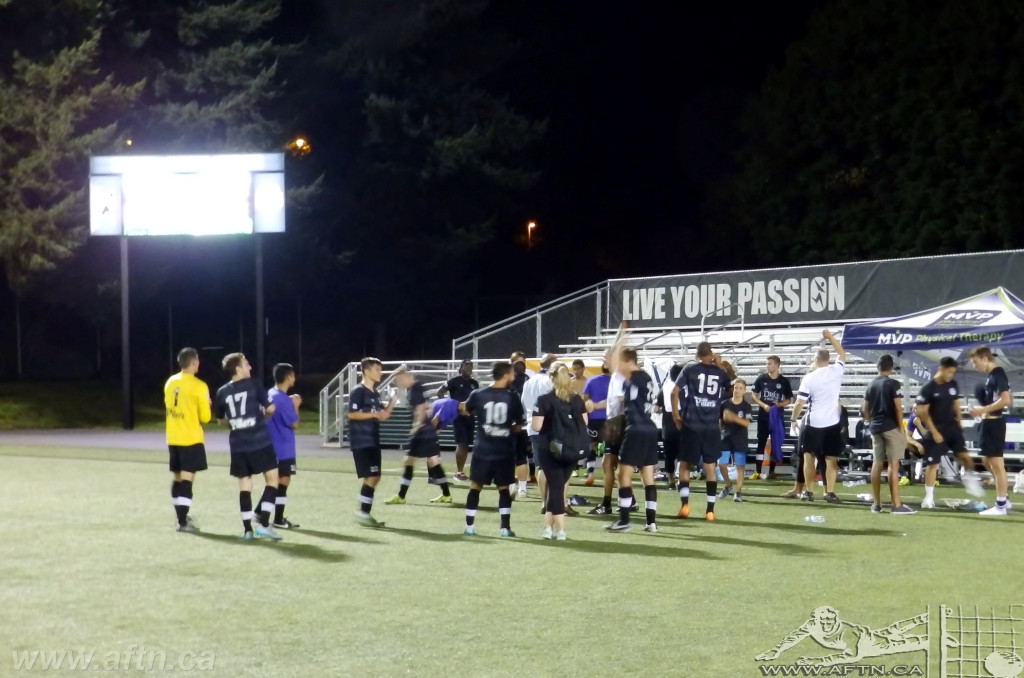 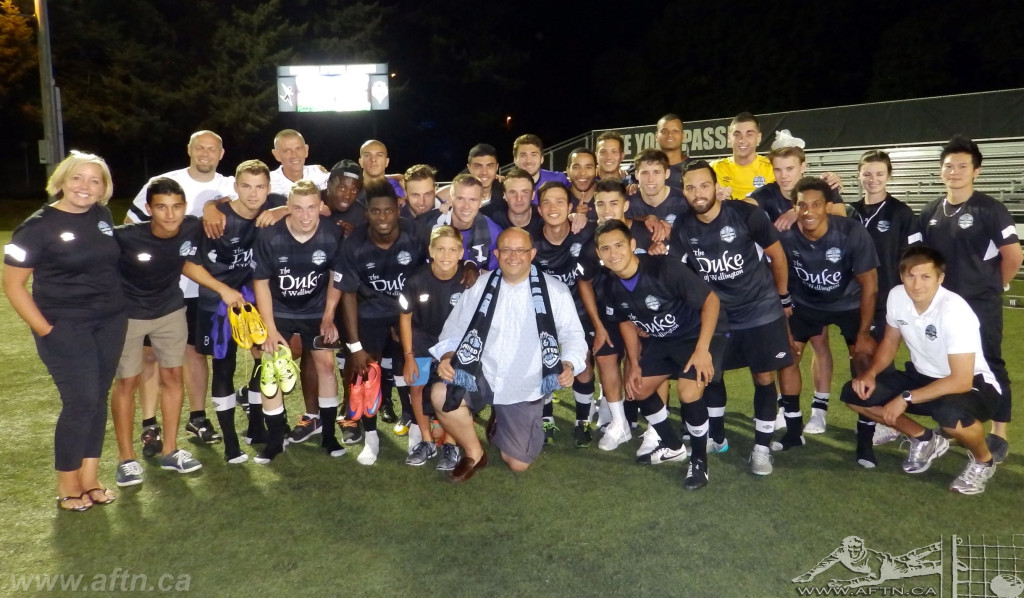