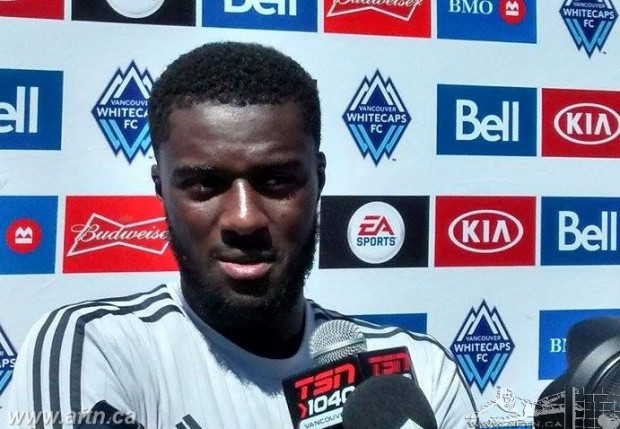 While their MLS rivals splashed the cash and brought in a variety of big name stars of various ages, Carl Robinson continued his more measured approach of adding young talent to his group, in the shape of 24-year-old Costa Rican right back Smith.

Smith comes to Vancouver on loan from Costa Rica’s Primera División side Deportivo Saprissa until the end of the year, with the option to buy or extend the loan deal.

A Costa Rican international at both youth and senior level, it’s fair to say that the right back comes to the Whitecaps, and to MLS, as something of another unknown quantity unearthed by Robinson’s scouting network.

We got our first look at Smith at training on Tuesday and what a first look it was.

He was only on the pitch for an hour, but it was a very impressive hour. Sure, you can’t read too much into what happens on the training pitch, but first impressions are that the Whitecaps may have unearthed another Costa Rican gem to follow in the footsteps of fellow Tico Kendall Waston. And we’ve all seen what a major impact he’s made in the league.

Playing alongside Waston, Christian Dean and Sam Adekugbe in the backline for some scrimmages, the 6″1′ Smith cut an imposing figure. Calm, quick, athletic and one hell of a tackler.

His tackles were fierce, but controlled and precise, including two top drawer ones that picked the ball cleanly away from Octavio Rivero and Kekuta Manneh.

On top of that, he hit a golazo of a strike from 30 yards out that took a wicked swerve in midair and beat Paolo Tornaghi all ends up. Robinson described it as a “rocket” and was happy with what he saw from Smith in his first training session as a Whitecaps and felt it was a good indication of just what the right back can bring to his squad.

“We only did a bit of light stuff with Jordan today,” Robinson told reporters after Tuesday’s training session. “You see the size of him. He’s a big boy. He’s athletic, he’s very comfortable on the ball, which I knew, and obviously he scores a couple of goals as well. It’s nice to have him in the group. It’ll provide a little bit of competition in the right back area for us and keep Beita on his toes.”

Music to our ears, as ones who don’t feel Steven Beitashour is giving the ‘Caps what they need in that position, but who has no real challenger to his starting spot. But that’s for another time.

Smith spent five seasons with Saprissa, playing alongside Waston the last couple of years. It’s a pairing that Robinson will hope will see them rekindle a spark and understanding for the Whitecaps.

Waston is delighted to have his countryman in town and has already been pivotal in helping Smith settle in to his new surroundings.

“I played a long time with Kendall in Saprissa there and also played with national team as well,” Smith told reporters through a translator (He understands English but is more comfortable answering in Spanish for now). “He’s been great. He’s a great resource. He’s helped me. Showed me the city, showed me around the stadium, took me around to his house, so it’s really nice to have that familiarity once you step into a new environment.”

So how did the new arrival find his first training session with his new club?

“It’s been great,” Smith added. “It was a short training session but it was really good. I’m glad I was able to get in here. It’s nice. Seems like everybody is part of a big family here, so I’m just waiting to continue going.”

If he’s going to go in with those hard tackles and bang in some impressive goals, he’s going to fit in just fine. With nine goals in 105 regular season appearances for Saprissa, has he hit one as good as that first training goal?

“In Costa Rica I have goals like this,” he laughed. “Two or three. I’m happy with this one.”

Smith joined up with his new teammates for the first time in Kansas City on Saturday and took in the dramatic 4-3 loss at Sporting Park. It was certainly some introduction to his new club and his new league.

“It was a great game,” Smith said. “The first half was really great. The team came out flying with a two goal lead, then in the second half, we all know what happened. It was an unfortunate result but we turn the page and we look forward to Saturday. We’ve got a big game against Dallas and that’s all that matters right now.”

As we’ve talked about many times before, Major League Soccer and Latino players seem to be a very good fit and although this will be Smith’s first time playing in domestic games in the US and Canada, he is familiar with MLS from what he’s seen on TV back home. And when he got the chance to come and play in a league alongside the likes of Kaka, Pirlo, Lampard and Gerrard, he jumped at the chance.

“In Costa Rica, we all watch football,” Smith said. “We watch football from Mexico, from Spain, from MLS. Here in the league there’s a lot of bigger players coming over from Europe. It’s just an opportunity to grow. Once the opportunity came, it was one of those things that I didn’t have to think too much about it. It was a good opportunity.”

Smith was originally lined up to come to Vancouver during the offseason, but a number of factors, including the chance to free up a roster spot by shipping Erik Hurtado off to Norway on loan, contributed to let Robinson pull the trigger on the deal a bit earlier.

“I didn’t want to miss out on the opportunity to get Jordan,” Robinson admits. “I know there was a little bit of interest in him between now and maybe January. The idea was to bring him in in January and have him on board then.

“But ala Kendall last year, we brought him in a little bit earlier and we get to look at him between now and the end of the year, and hopefully kick on next year as well. He brings a competitive edge to that back line for us.”

Smith will take up an international spot when he is officially added to the roster, which he hasn’t been as of yet. The Whitecaps don’t have any currently available, but Robinson confirmed to AFTN last week, that won’t be an issue when the time comes, which will be at some stage this week.

So could Smith be available to play either this week in MLS action against Dallas or midweek in the Canadian Championship clash with Montreal?

“He could be, yeah,” Robinson said. “Whether he will is another question. I’ve got 23 guys there and they’re all desperate to play in this next big game for us. He could be available. We’ll just wait and see.”

For Smith himself, he’s already just itching to get out on the pitch when the time comes.

“I’m ready to go,” he said. “It’s up to the coach to let me know when it’s my opportunity and then once I get that opportunity, make the most of it.”

First impressions matter and on the evidence of ours, you get the feeling that he’ll be doing just that.