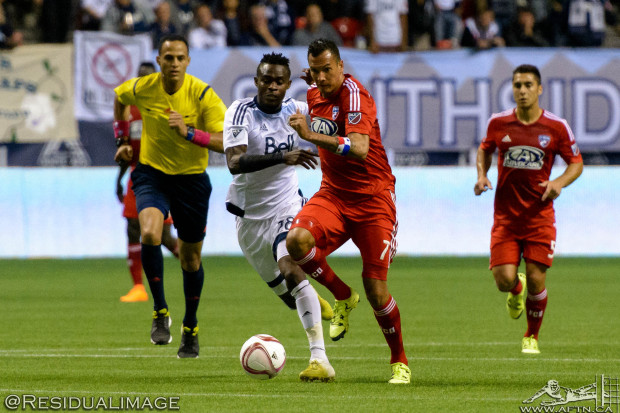 [It’s safe to say that the Whitecaps signing of Panamanian international Blas Pérez has, and will continue to be, met with mixed reactions. Even the team here at AFTN is split over the merits of the signing! In his latest column, Jay Duke gets fired up from his side of the divide and looks at what Pérez brings to the ‘Caps…]

While in many leagues, it’s a bit of a faux pas to bring in your fiercest rival’s notable players, Carl Robinson has shown that he won’t let fans’ perspective influence him from acquiring a player he covets.

First there was Mauro Rosales. While Rosales came from Chivas in a trade for Nigel Reo-Coker, he was best known for his contributions in the rave green of long-time rival Seattle. Robinson then one upped himself, when in last season’s search to replace Andy O’Brien, he went only slightly farther south and picked up Pa Modou Kah, who was not only another bitter rival’s centre back, but also was coming off a season in the Rose City where he struggled.

Both signings proved to be clever moves. Rosales ended up playing in 35 matches, and while he only contributed a total of six assists and one goal, he added much needed experience and creativity before injuries and age made him lose a step for much of 2015. Kah had a stunning reversal of form, and he formed a fantastic pairing with Kendall Waston, in addition to proving to be the glue in a dressing room noted for its positive chemistry.

In an attempt to find a big target striker with experience, Robinson has now really pushed the boundaries to find the final piece in his offseason puzzle. As reported by Aaron Campbell last week on AFTN, Blas Pérez is Vancouver bound in a trade that would appear to include the MLS rights to Mauro Rosales (who is expected to be unveiled in Dallas on Wednesday).

Robinson is showing again that he has a serious set of knackers. In addition to signing players from bitter rivals, his willingness to sign and give meaningful minutes to young players is well documented. He has also double downed on some of his unproven signings, with Jordan Smith currently in the pole position for the starting right back position. Now Robinson goes a step further in signing Blas Pérez from a FC Dallas team who has provided some of the most venomous action with the Whitecaps.

Pérez and Dallas have locked horns with the Whitecaps frequently since Vancouver entered MLS, and Pérez was frequently one of the main combatants.

Whether it be controversial playoff exits, blatant simulation, or flying elbows, matches between the two clubs have rarely lacked in extracurricular activity. Even around the league, to state that Dallas has been known for its less than ethical interpretations of the rules would be kind to the Texas side.

Yet Robinson has turned the other cheek and signed a player who very recently was suspended for an elbow to the head of Vancouver veteran Jordan Harvey.

Pérez’s disciplinary record is nearly as busy as his goal scoring has been. Alongside his 37 goals and 15 assists in 103 MLS matches, Pérez has racked up 5 red cards and 15 yellow cards, with an additional suspension retroactively for his elbow on Harvey.

While Pérez’s effectiveness may be waning as a 34 year old player, he will not be relied upon as an every day starter. On paper, that makes the Pérez signing a very astute one. He ticks all the boxes that the Whitecaps desired. A big, strong striker that can hold up the ball, links up with teammates, and knows where the back of the net is. And as a domestic player to boot. He will certainly be a useful option for a club looking to make the step up to a MLS Cup contender and thoughts of a deep run in the Champions League.

While his contributions are significant, it is his other characteristics which cannot be ignored. In addition to his occasionally excessive petulance, and his notable peskiness, Pérez has a penchant for the dramatic, as it seems like his sturdy 6’1” frame frequently finds the ground under minimal (or non-existent) contact.

A club can handle such a player, especially if there is a thought that the team plans on steering him away from such behaviour. The Whitecaps, however, cannot claim such a mantra.

Vancouver was second in the league in fouls caused last season with 477, behind only Colorado, and was also second in the league in yellow cards at 74, behind the particularly feisty Montreal Impact. And it wasn’t just by the numbers. Pundits and fans around the league frequently singled out the Whitecaps for their chippy play. Biased supporters will point to incompetent officiating, or equally guilty players around the league, and both points are valid ones.

The reality is that the Whitecaps are now more similar to the previously hated FC Dallas than they’d care to admit. Not only do they have a familiar striker, but Vancouver has a plethora of players who are all too welcoming on an invitation to go to ground in the hopes of coercing an advantage.

Techera is one of the smallest players in the league, so while it’s less obvious when he allows gravity to take control, he certainly seeks out contact and needs no invitation to flatten out. Octavio Rivero is likely the most flagrant operator of the art of deception, despite an obvious failure to gain almost any advantage despite repeated attempts to sell the slightest of contacts. Even Kendall Waston takes part in the odd flop despite being the most physically imposing player in the league.

A club and its fans could still make excuses, since tricking the referee is considered a skill, rather than a blight amongst many people in the football cultures where these players come from. Techera and Rivero can be said to still be adapting to the league, and it’s reasonable to believe that Robinson could still coach these players to avoid embellishment. And in Waston’s case, he’s fouled as such a matter of routine during set plays without even so much as a blink from an official that it’s understandable that he needs to bring all six foot five of himself crashing to the ground to draw some attention.

All of these excuses can safely be cast aside. The Whitecaps went out and traded for one of the most notorious pests in MLS in recent memory. A player whose antics, which are known league wide, have been on display in front of a full house at BC Place. A player who is at a place in his career that it would take something nearing magic to deter him from avoiding tendencies he’s had for years. A player who likely wouldn’t be effective without those tendencies.

I’m sure Pérez is a real quality person off the pitch. Robinson has made a point of recruiting players with character. I would never question Pérez’s values as a person, but his values on the pitch certainly leave much to be desired.

Many may only care about the number in the “points” column at the end of the year, and while this move probably helps the chances of increasing that number, it certainly concedes any moral higher ground. It’s all a bit ironic considering only a day has passed since the Whitecaps unveiled their new jersey, where their club mantra is prominently displayed claiming their “honour,” a word often used to describe a person of high respect and admiration.

At least they’re giving it their all.