Following on from last Sunday’s open house for BC Lions season ticket holder, the new temporary stadium hosted a CFL pre-season match up between the BC Lions and Edmonton Eskimos on Father’s Day.

I’m a Lions season ticket holder, but I never bother with the pre-season games. Never see the point. Well not usually. Today was too much of a lure – the chance to see the opening game at the newly built and soon to be new home to the Caps.

The fact that the Lions lost 36-32 played second fiddle to the chance for everyone to check out the new stadium in actual use, as opposed to the empty facility we saw last week.

The rumours are that the Caps will have Empire as their home for the entire 2011 season, with work possibly not being complete on BC Place until November now. So what can we expect when we go to see the Whitecaps play their inaugural MLS season there next year?

Well, hopefully a few changes. I know it’s very early to judge and there will be teething problems for any new facility, but there was a lot that could have gone better yesterday and some little kinks that need to be worked out, as well as some that need to be but just can’t be.

So here’s a rundown of some of the things that will interest us Southsiders and we’ll start with getting to and from the actual stadium itself.

It’s no surprise to say that driving and parking at Empire is a bit of a nightmare. The official lots are expensive, even with the official parking pass that the Lions are selling to season ticket holders for the season. It works out to be $25-$30 a game depending on what lot you select.

If you’re hoping to tailgate at Empire, then forget it. The PNE will not allow you to fire up BBQs or drink any alcohol in the PNE lots and they put an end to a few yesterday.

There are four allocated to Lions fans, totalling around 1300 spaces. Not a lot for 27,000 crowds, so the surrounding streets are packed with cars.

There are currently a lot of both permanent and temporary resident only signs up on the sidestreets. Any street that didn’t have one was crammed full of cars, much to the residents annoyance. I wouldn’t be surprised if we saw a lot more temporary signs cropping up as the season goes on and the resident complaints increase. An Olympics size no parking zone will likely be introduced before the end of the season (which was no parking within a ten block radius of the Coliseum).

Unless you absolutely have to take the car, I’d advise taking transit. It’ll be a lot less hassle and they seemed to have a lot of shuttle buses sitting after the game up to 29th skytrain station. Translink were also selling return journey tickets inside the gates of the stadium to speed up your travels.

Once inside, the whole place does look new. It’s all plastic, metal and a bland whiteness everywhere. Very much a temporary stadium but that said, it’s great to have it and to have games back at both the Whitecaps and Lions spiritual home.

My Lions seat is in the gold section of the east stand. At BC place, it’s a great spot, at Empire not so much. For those familiar with BC Place, the front rows of Empire are much lower to the ground, thus your viewing is restricted more for a CFL match at least. Not sure how that will transfer for football, but I’m in row H and you can just see the touchline over the top of the advertising boards. Sadly you can also only see the head and breasts of the cheerleaders, but they’re the best parts anyway so can’t complain! The distance between the rows, also seems reduced at Empire, so if you have someone tall sitting in front of you, it’s not a lot of fun.

When the Caps play there, anyone looking for seats in the east or west stands may want to be a few rows higher up. The covered section is probably about 12 rows backs, but watch with going back too far as the columns holding up the roof will also cause a little resticted view in some seats. 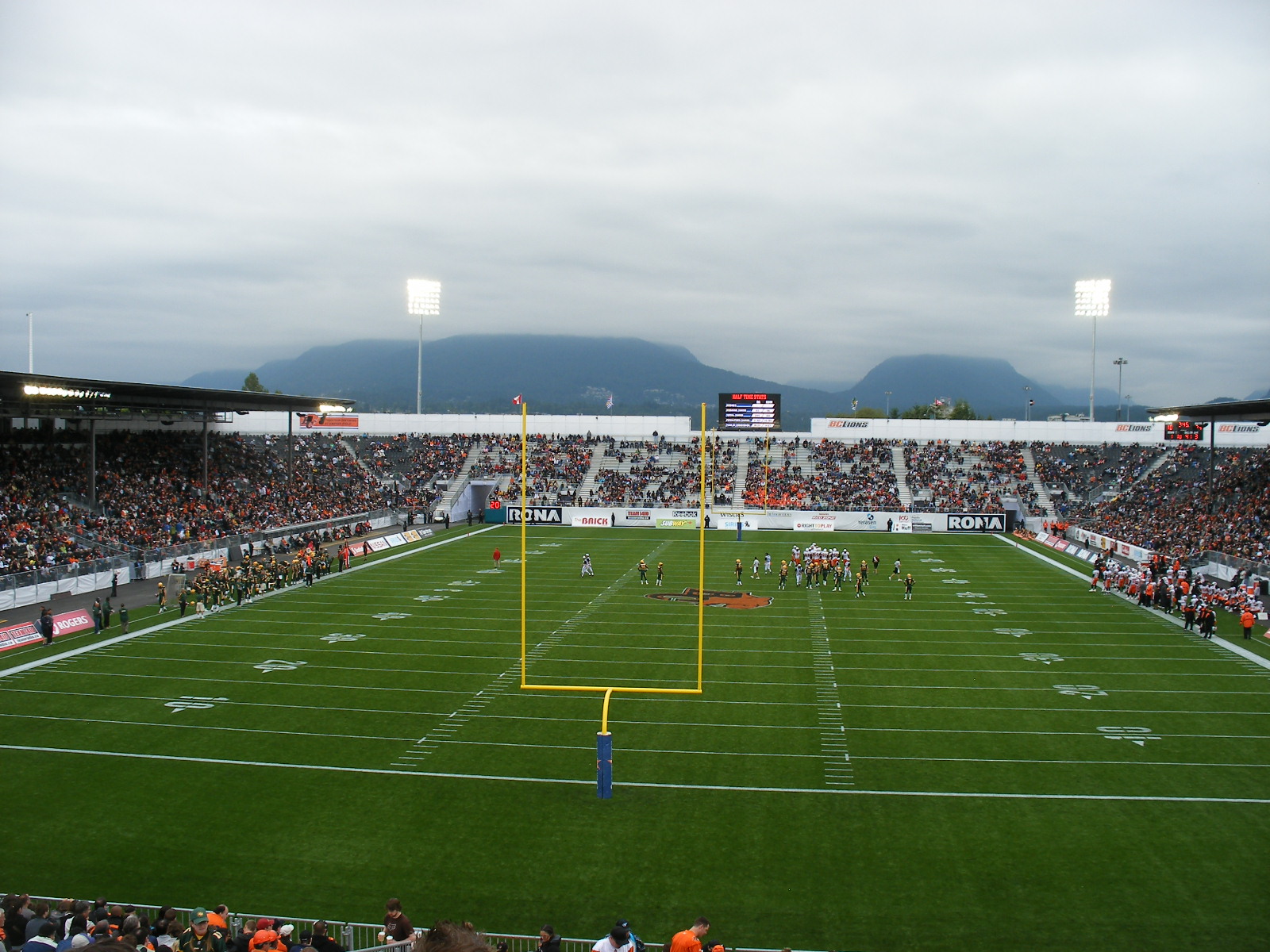 I decided to make the move to the Southside for the second half, as there were a few gaps there. First time I’ve watched a throwball game from the endzone and it wasn’t actually that bad a view. From the Caps point of view, the Southside is going to give us a cracking view, especially if you are a little higher up.

The Southside (and northside) is open, which is a shame as a covered shed would have been trememndous. It boosts your volume so much and adds to the atmosphere no end. The old Scottish grounds that still have sheds are always my favourite ones to visit. There are also no bucket seats there, just bleachers. Not sure what is the most uncomfortable to sit on for such a large period of time, but we’ll be standing anyway, so it doesn’t matter too much.

We’re going to be further away from the game than we’re used to, but it’s not as bad as it could have been. The metal bleachers also make one hell of a noise when banging your feet on them, so that’s going to be fantastic for us.

The television gantry is also at the back of the Southside, which should be good to capture our atmosphere and we’re also facing the only big screen in the stadium, so that’s a bonus too.

The food inside is provided by PNE ‘Grab n Go’ cabins. The huts had big lines yesterday, seemed woefully unprepared for the half time rush when it came to food being ready and there’s not a lot of them. Most of them are situated at the north end, with some also at the top of the ramp behind the west stand. The latter is the quieter as most people didn’t seem to know it existed.

With it being PNE operated, it’s what you’d expect and thus not very exciting or healthy. Burgers, hot dogs, fries, chicken strips, fried chicken and pulled pork sandwiches. I doubt we’ll get that pie stall we’ve been pushing for, but at least we’ve made pulled pork sandwiches a Southside tradition already, so we can be happy with that. Maybe not the $8.50 price tag for them though! I settled for the dryest, chewiest chicken strips I’d ever had. Bad choice.

There’s beer and soft drink stalls dotted around outside of the stands, so you shouldn’t have too long to wait or too hard a job finding them.

Toilet facilities are just your usual temporary variety. There’s a line of portapottys behind the east stand and various cabins dotted around the concourse areas.

The players facilities are crazily minor league! Obviously there’s not been the opportunity to build proper dressing rooms in a temporary stadium, so players of both teams change and come from portacabins. That’ll be fun for the likes of Beckham and Donovan next year! 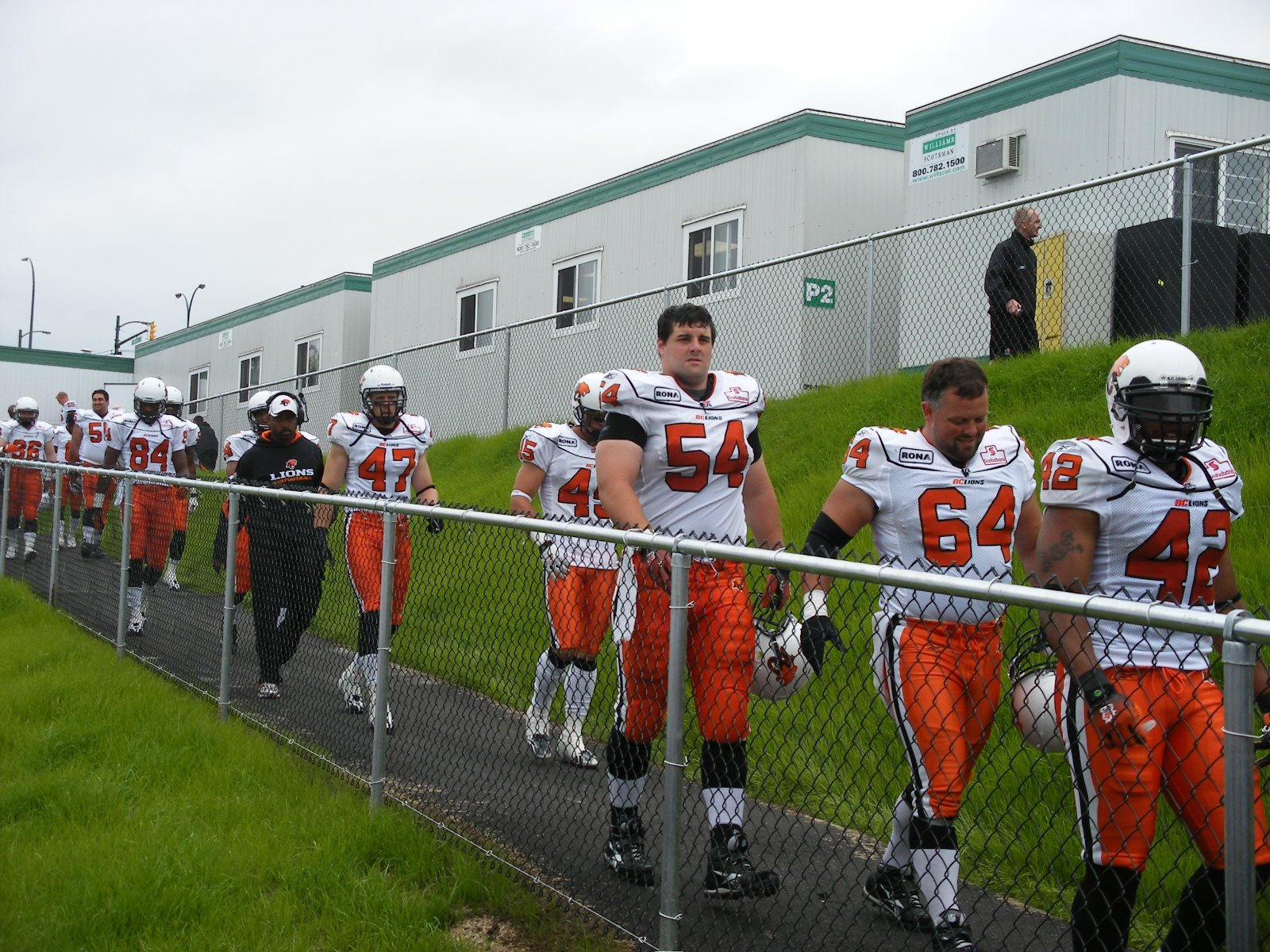 The home team come down a hill and the visitors across a metal bridge. It’s bizarre to see it at half time but does give fans the opportunity to get up close and personal with their faves. It’s not what you’re expecting when you’re going “major league” though.

Finally the new turf. I don’t know a lot about astroturf and this is meant to be some of the best in the world, but a lot of dust was coming up off it whenever people ran, turned or the ball bounced. I don’t know if this is normal, but it’s going to be shit for football if that’s what we end up with for the Caps.

So there you have. Empire is alive and kicking once again and despite the flaws, I can’t wait to see the Caps take the field there next season.