In this time of not much football to write about, I thought I’d make today’s post partly a bit of a reflection on what wonderful timing it’s been arriving in Vancouver and following the Whitecaps.

Last season was my first full season of getting to follow the side in person. Having followed them since 2001 and taken in a few games here and there on vacation, it was great to become a season ticket holder and finally cheer them on from the Southside for a whole season.

And what a first season – the USL Championship was duly delivered on home soil and the Club won the Cascadia Cup as well (a cup for Vancouver, Seattle and Portland that is played for each year).

This season’s only just begun and already I’ve hopefully seen another piece of silverware won with the Caps so near to winning the Canadian Championship in fine style.

What a start! What success! And although it’s great and I hope that there’s a lot more to come, it’s not the driving force for me following the teams I love. Well, you couldn’t really be an East Fife supporter and have that. Thin and thinner it is for Fife fans mostly!

What makes people follow a particular football team? For me it was locality. I believe in following my local side. Others have family traditions whilst others are just glory hunters and want to see trophies delivered on a regular basis.

I’ve been very complimentary about Toronto FC supporters in the past in the articles I’ve written for the East Fife programme and comments on AFTN. They really have galvanised football fans in the city and the country and create an atmosphere that is second to none in the MLS.

There are many teams that look on in envy at what has been achieved there, but let’s not forget that they didn’t invent how to be a football fan over in Canada!

There is also a lot of flak thrown some of their way, with accusations of them having plastic fans and a support comprising of a lot of johnny come lately’s who want the big match atmospheres and didn’t support the Toronto Lynx in the USL previously.

You can also look at all the allegations thrown around about “real” East Fife fans that have been prevalent recently on the AFTN forum. 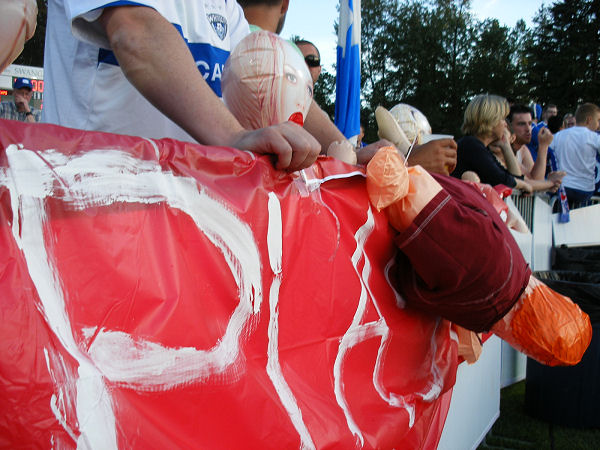 We in the Southside engage in all this plasticness and had a great homage to them with a plastic doll tifo show on Tuesday night (see pic). The truth of the matter is that we ourselves will need to attract a whole lot of these “plastic” fans in order to increase our attendance from the current 5000 odd to the 20,000 needed when we move to BC Place for 2011.

And these fans shouldn’t be discouraged or frowned upon, just because they haven’t been coming to watch the USL action. Good on them for coming out first and foremost in a hockey and throwball centric city.

What I hope we don’t get too much off, and we will get some, is some of the reactions that certain Toronto fans have shown in the aftermath of Tuesday night’s defeat. They really have let their fellow fans down.

I can’t believe some of the comments on the Red Patch Boys forum (the largest TFC fan group). All the stuff about not going to another game, selling their tickets, not renewing season tickets etc etc. I mean, wow. One defeat and they react like that. Guess they don’t sing “loyal supporters” at the games.

Someone should tell these guys that unless you support a team like Man U or Barca or the Milans or teams of that ilk, silverware is not guaranteed in this sport. It’s fine to complain about how the team is playing, ask for the manager’s head, protest etc etc. That’s all part of being a football supporter. Not throwing your toys out of the pram at setbacks and walking away completely. Their fellow fans and the game in general doesn’t need people like that.

Their team is only three years old and already people are complaining about the lack of trophies. Give me a break!

I’ve spent 25 years watching thin and thinner with the Fife. Still being there and cheering on the team through the rough times is what being a football supporter is all about.

As mentioned earlier, I’ve come to the city at a fantastic time and I’m planning on basking in this success as long as I can! And when the tough times come, I’ll still be there cheering.

At least we have the memories. Maybe that’s what makes the TFC fans so bitter. They have NOTHING!

My first East Fife game that I was allowed to attend in person was the Scottish Cup replay in 1984 against Hibs at Bayview. Our Second Division battlers won through 2-0 against their more illustrious Premier League opponents and I was instantly hooked, being at every home game for the remainder of that season and then a regular, home and away, thereafter.

East Fife won promotion that season and then nearly went up to the Premier League. After that initial spurt of success it’s been mostly downhill following the black and gold! I’ve still been there though, cheering them on.

Somehow though, I think there’s a lot more trophies and success lying in store for the Caps.