When you follow the team you love, you want to watch them play at the highest level they can reach domestically and then challenge for honours internationally and that means the various Champions League competitions that now take place on continents all over the world.

Most fans will never get to see their team play in a Champions League. The chances of seeing East Fife in there are slim to nil I think it’s fair to say!

Last night the Vancouver Whitecaps came that one step closer to making their fans dreams of CONCACAF Champions League exploits that much more of a reality, with a clinical 2-0 home victory over Toronto FC.

Swangard Stadium was packed out and it was standing room only for the 5,688 sold out crowd and the Vancouver fans were sent into raptures by two goal hero Ansu Toure, who struck in each half to clinch the historic win.

The Whitecaps, to a man, put in a gutsy and brave performance for the whole 90 minutes, with each player showing their desire to win the competition, a fact that can’t be levelled at Toronto, whose lacklustre performance, particularly by the non Canadian players, led to heated scenes in their dressing room after the game.

These scenes couldn’t have been more different from those involving the Whitecaps players who came over to celebrate in the Southside as soon as the game was finished, sparking an impromptu pitch invasion and the holding aloft of the man of the hour Toure. The key thing here was that we knew the Championship wasn’t officially won, but after a performance like we had witnessed last night, the fans wanted to give the players the Championship celebrations they so rightly deserved. 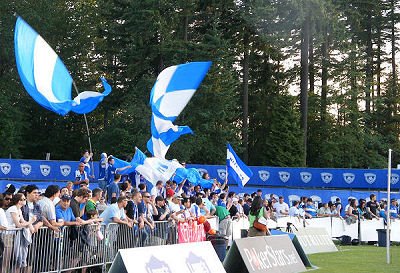 Special mention also has to be given over to the Southsiders tonight. We sang ourselves hoarse for the 93 minutes and for the older ones amongst us, especially those who followed the team in their NASL and Vancouver 86ers days, the tears flowed in what was such a special moment for them.

In the build up to the game, so much media attention was given over to the fact that a win or draw in the game would give TFC their first ever trophy. The Caps slid in under the radar unnoticed and made Toronto pay.

The victory leaves the Caps top of the table, having played all of their matches in the competition. With one game remaining, Toronto must win by 4 or more goals at Montreal on June 18th to snatch the Canadian Championship, and Champions League qualification, from Vancouver’s grasp.

It’s easy to get ahead of ourselves here and automatically think that the Caps have done it, but it will still be a nervy match to watch in a fortnight’s time.

If, and when, Vancouver does make it to the Champions League it will be a very historic moment as it will be the first time in the Club’s proud 35 year history that the Caps will be entering the world stage for the first time and they will be taking part in a FIFA sanctioned competition. Not bad for a side currently plying their trade in what is supposed to be America and Canada’s second tier football league.

The two weeks of waiting to see if the dream is a reality is tantamount to torture, but when the big news is official, it’s Champions League here we come.