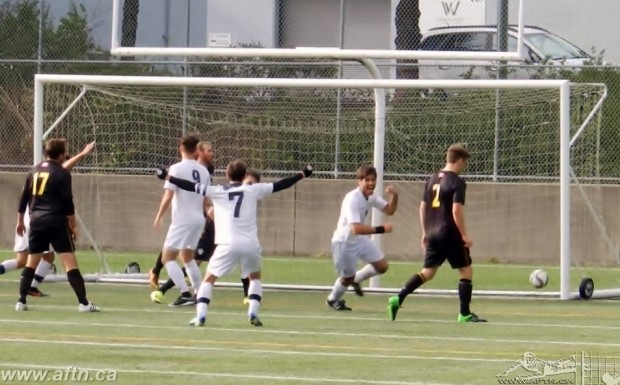 There were goals galore in the weekend’s eight BC Keith Millar Cup (Provincial B Cup) preliminary round matches.

We headed to Burnaby Lake for our Saturday match of choice, to see the 2014 B Cup Champions, South Burnaby Fighting Irish, take on FVSL side Langley United Sparta in what looked to be one of the best games of the round.

We weren’t disappointed, with both teams serving up an entertaining encounter, as Burnaby ran out 2-1 winners to move into a first round match up with RSSA Premier Division winners, AC Richmond. 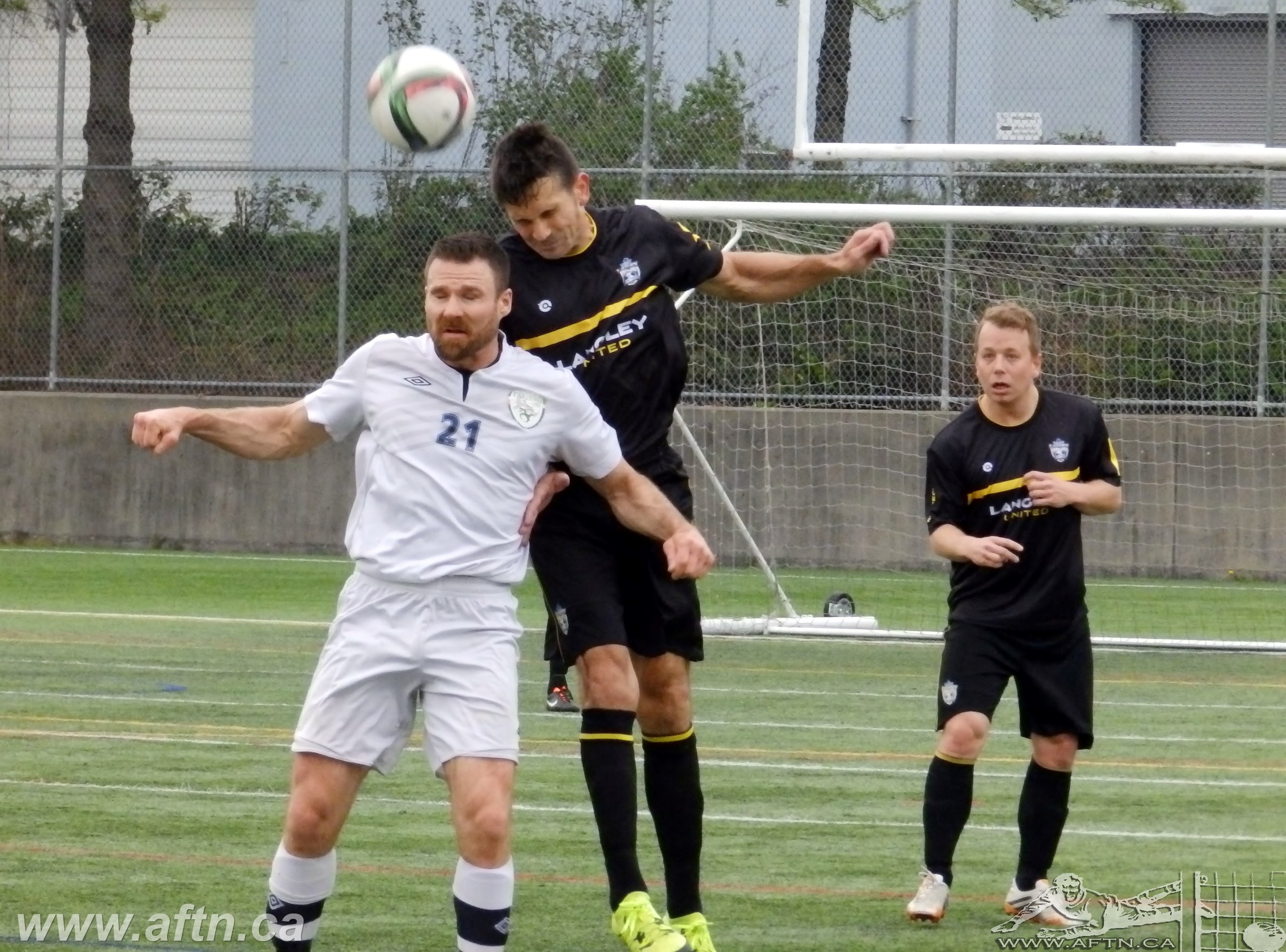 The Irish dominated the play in the first half, but neither side really tested the opposition keeper apart from a 16th minute long range effort from South Burnaby that was turned around the post by Lance Verhoeff in the Langley goal.

With the teams looking set to go into the break on level terms, the home side took the lead with the last kick of the half.

A corner was floated in from the left, which Langley’s keeper flapped at. The ball fell to Jordan Patrao in front of goal and the defender poked the ball into the empty net for the 1-0 lead.

It was no less than South Burnaby’s play deserved but Langley came out all guns blazing in the second half, creating a couple of half chances which went wide.

The Fighting Irish doubled their lead a minute before the hour mark and it was from another corner, with Derek Patrao brilliantly meeting it to powerfully head home past Verhoeff and two Sparta defenders on the line.

Both teams exchanged chances before Langley pulled one back in the 66th minute with a Joel Friesen shot from the edge of the box that went through a mass of players and into the bottom corner.

It certainly looked like Sparta would get the equaliser in the closing minutes and they certainly had their chances, dominating play in the half. Tyler Bancroft and Paul Ballard had a couple of efforts after being played in on goal, but they couldn’t find a way past Irish keeper Carlo Bertelli who produced a string of fine saves.

Langley’s Joseph Passi was sent off in the third minute of stoppage time, and there was no way back for Sparta, as South Burnaby ran out 2-1 winners.

You can see our (somewhat crappy) video of all three goals, and a couple of late Sparta chances, in the video below:

AFTN correspondent Devon Rowcliffe headed to the Jericho West turf on Saturday afternoon to see VMSL side Vancouver Strikers coming back from being a goal down at half time to beat out FVSL side PoCo FC Royals 2-1.

Here’s Devon’s take on the match.

Poco scored first around the 20-minute mark, as E. Sinclair headed home a free kick that seemed to gradually float down from a high trajectory. Despite that, Vancouver Strikers had most of the possession during the first half, but Poco went into half-time with a 0-1 away lead, thanks in part to a stellar performance by their diminutive goalkeeper.

In the second half, Vancouver Strikers finally found the goal from a corner by Tayu Hayward. Poco’s goalkeeper wrapped his gloves around the arriving ball as it dropped in front of goal, but unfortunately he misjudged the ball’s spinning momentum and it escaped his grasp, lurching over the goalline to Poco’s dismay.

Late in the second half, Vancouver Strikers’ centre-back Arved Poetter, a former member of the Langara Falcons, scored what would be the deciding goal of the match. With Vancouver Strikers awarded a corner, Poetter lurched up and used his tall stature to find the incoming ball with ease, heading it above the goalkeeper’s reach and causing the southern net to rustle for the third and final time of the match. 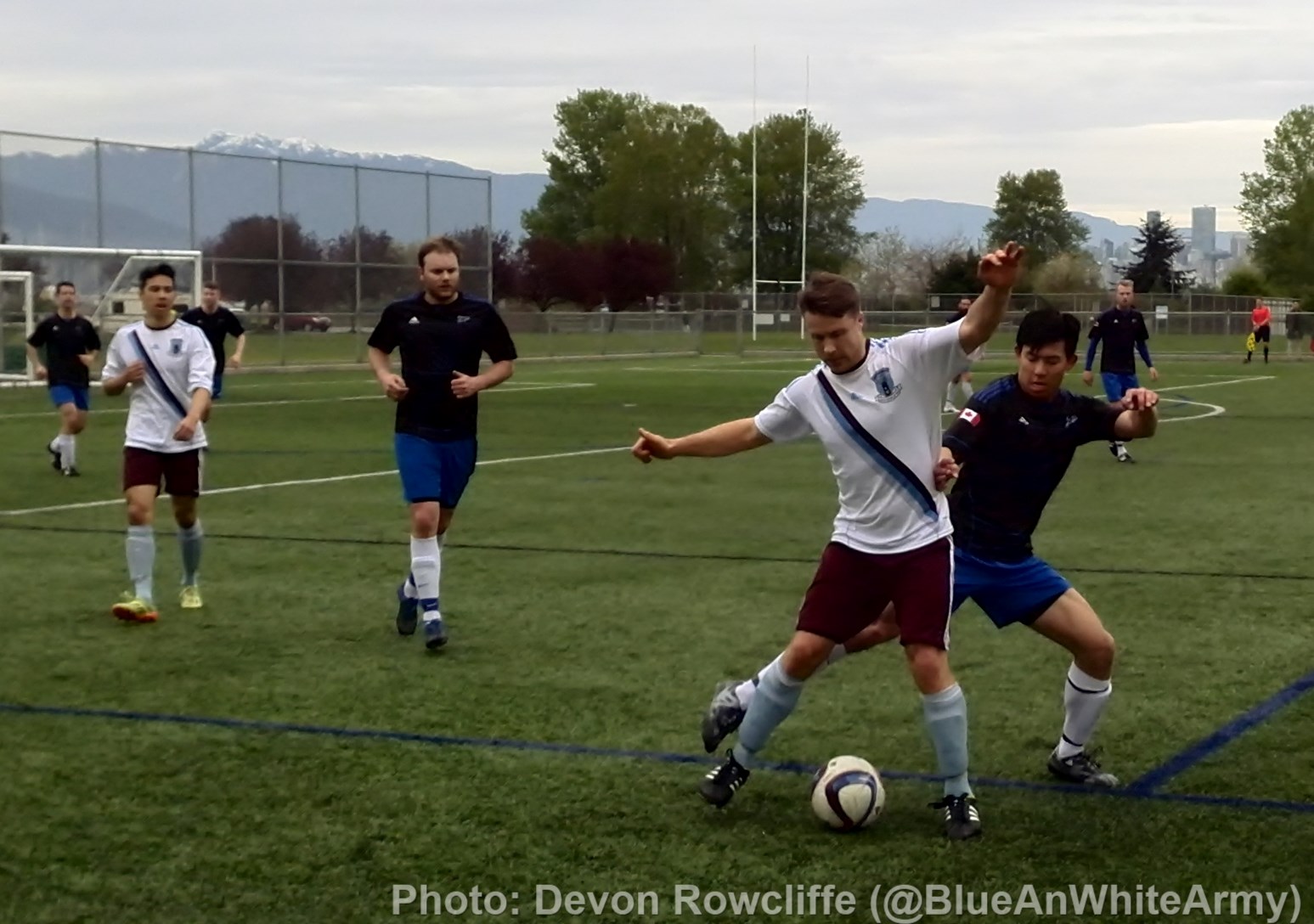 The Strikers are now on the road next weekend for a First Round match up at another FVSL side, Division 2 Champions, Westcoast FC United.

Elsewhere on Saturday, 2012 and 2013 champs, the Richmond All-Blacks, were rampant on the road in a 6-2 hammering of VMSL side Harps FC on Saturday night, with Harps seeing three players sent off in the process. VMSL Division 2A champs GN Sporting Club went one better in a 7-3 home win over island side Juan de Fuca All Flows.

Another island side crashed out in Port Moody, with Gorge United FC going down 1-0 to PMO Titans. VISL side Saanich Fusion Dodge Harris did make it through to the first round, however, seeing off Burnaby side We’R United in a closely fought 2-1 victory.

There may have been four goals, a missed penalty and some late drama, but it wasn’t a great game and Norvan must be wondering how they weren’t out of sight earlier after the chances they created.

Eoin Launders had the first chance for the Viking Storm in the first minute, but Rain City keeper Christopher Hamilton came up with the save. 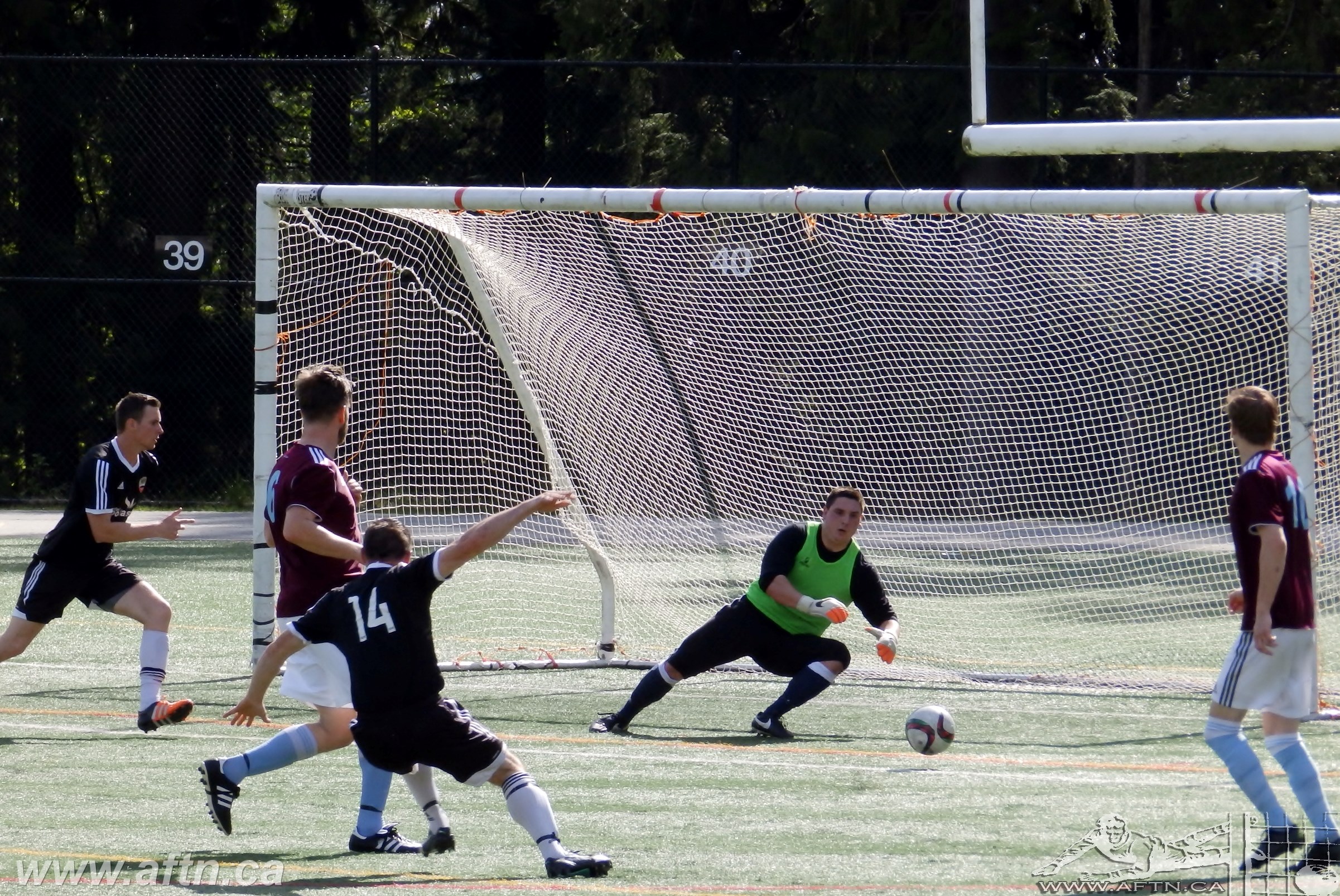 The VMSL side were making most of the running but Trevor Koochin nearly caught them out with a looping 19th minute effort before the chances came thick and fast for Norvan.

Chris Johnstone had a great chance to give them the lead in the 34th minute, knocking the ball past the keeper, but he was unable to get a shot off under pressure from a defender allowing Hamilton to recover.

Gary Walsh should have scored five minutes later when he raced in on goal, firing wide, with just the keeper to beat, before Johnston had the ball in the net but was quickly flagged for offside.

Rain City finished the half the stronger with first Kevin Berna forcing a leg save out of Storm keeper Anders Hammerberg, before a ball was whipped in across goal with no takers.

Walsh was in on goal again just past the hour mark but fired wide once more before the breakthrough finally came in the 75th minute, and when it did it was a scrappy effort. A long ball into the box bounced off Rain City defender Taylor Jackson straight into the path of Johnstone, who one timed it into the net.

The game burst into life in the final five minutes.

Norvan added a second from a Jamie Casie penalty after Hamilton upended Johnstone in the box, before Rain City got a penalty of their own two minutes before full time when Jan Hanus was adjudged to have brought down Derek Nelson. Michael Pember stepped up but crashed his effort off the left post.

That looked like the last hurrah for Rain City but they pulled one back moments later after a defensive mix up saw Hammerberg come out, and fail, to collect a ball, with Koochin pouncing on the confusion to fire home.

As the Richmond side pushed forward for the equaliser, they were caught out when Hamilton scuffed a goal kick into the path of Walsh, who raced in on goal and lobbed the keeper to make it a 3-1 final.

You can see video of NV’s three goals, Rain City’s penalty miss and a couple of other chances below:

In Sunday’s other game, FVSL side Westcoast FC Milan needed extra time to see off the challenge of Richmond side Jugadores CF, eventually going through with a 2-1 win.

So after those eight preliminary round matches, the First Round draw for the 2016 Provincial B Cup is as follow:

Games will be played over Friday, Saturday and Sunday next weekend. You can see the full schedule with venues and kick-off times, along with the First Round of games in the A Cup, HERE.

You can see all of our photos from the weekend on Flickr HERE or view the slideshow below: