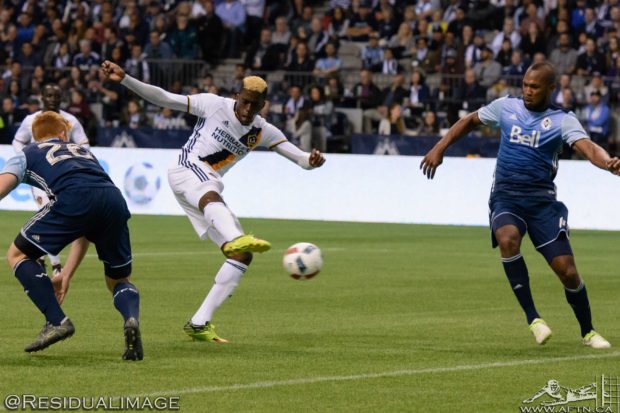 Vancouver Whitecaps are trying to lift their spirits after a frustrating second leg Cup loss to Toronto on Wednesday night. Although they played well in that game, one moment where communication and concentration failed allowed Toronto to escape with the Voyageurs Cup.

However a few days earlier, in MLS play, they snapped a winless streak against Philadelphia. It will be a question of mentality, to take the positive things they did right and move forward against the perennial MLS contenders the LA Galaxy.

LA may have many big names but big names don’t automatically win games. They have not won in eight MLS matches, however they have been winning some US Open Cup games during that time. But they are clearly struggling to find some form, and they will look to beat some Canadian invaders on Independence Day!

Only one point separates these teams right now. It will be an important game for the Whitecaps to try and put some distance between them and other playoff contenders and to spoil any Independence Day plans.

This is a very winnable game, as the LA Galaxy backline has been weakened. Two of their star signings (Jelle Van Damme, and the surprisingly decent Ashley Cole) are out due to yellow and red cards respectively. They have also seen fullback Robbie Rogers out due to injury for a while, and Dan Kennedy has also been out for a spell.

Whatever makeshift backline the Whitecaps will face, hopefully whoever will play up top can get a goal and get confidence going forward. Recently Robbo has been playing Erik Hurtado, while the Octavio Rivero trade saga continues. I look for this to continue, and full credit to Hurtado. Obviously the work he has been doing with coaches, and the small loan spell in Norway, have improved his game. He is no longer heedlessly dribbling at defenders. He is as strong and fast as he ever was and he is passing more. Hurtado just needs to find that finishing touch.

As for who is going to play behind him ? Why that would be Kekuta Manneh, Pedro Morales and Christian Bolanos. Although I think Nicolas Mezquida brings more in the central attacking midfield, I see Morales starting there, simply because we need to beef up our defensive midfield. Those three should be creative and pacy enough to get some good looks at goal up against a patchwork defence in LA.

With Kendall Waston, our terrifying Tico, finally not being suspended, I look for him to bounce back and have a good game after being involved in the error in the final kicks of the Voyageurs Cup. He is a hungry guy, and will look to show he wants to win. Beside him with be the Ginger Ninja with a big-game goal-scoring touch, Tim Parker. Hopefully that trend continues because for the foreseeable future, goal-scoring by committee is the name of the game for the Whitecaps offense.

As for the fullbacks, well Jordan Harvey is going to get the nod for that on the left, with him being the most consistent Whitecap so far this year. The next interesting question is who will be playing on the other side. Although I prefer Fraser Aird, Jordan Smith has been getting better and has been getting a run of games. I look for this to continue.

David Ousted should start in goal. Although he obviously felt bad about the Voyageurs Cup game, he made some really big comments. I love this guy’s leadership skills. When he makes a mistake he owns up to it. So I look for him to make a big bounce back this game.

With the attacking threat that LA Galaxy can bring through Robbie Keane, Gyasi Zardes, Sebastian Lletget, Steven Gerrard and Giovani dos Santos, I think it would be a good idea to put in two defensive midfielders. Matias Laba and Russell Teibert (if healthy) have been playing together for a while and I think we could use Laba and his grit and smarts with Teibert’s relentless hustle. If Teibert is injured, then this may be a huge chance for Ben McKendry to come in and make a name for himself.

The game plan will be simple. Absorb the pressure that Galaxy can put forward, then hit them on the counter or on a set piece. Then hopefully we can get another good result against the Galaxy.

Can the ‘Caps dig deep and bounce back against a struggling LA side?

Will the ‘Caps keep scoring by committee?

Facing a strong LA attack, will individual defensive errors again be their undoing?

Robbie Keane – the majestic Irishman can score in a number of ways. He is always very clever with his movement as well.

Nick: 1-1 draw is written all over it. Hurtado to get his first, Zardes to get one back for LA.