‘Found In The Attic’ is AFTN’s look at some of the wonderful pieces of Whitecaps, Canadian and North American footballing memorabilia and collectibles from both yesteryear and more recent times.

We continue the series with a look at some Canadian national team memorabilia.

With World Cup qualification hopes on the line tomorrow in Honduras, it seemed a very fitting time to dig this one out.

As each World Cup cycle comes around, it’s always hard not to think back to the one time that Canada did qualify.

Mexico 86 will long live in the memories of Canadian football fans and for those of us who still have the Panini sticker album from the tournament, it will live on even longer.

There was lots of memorabilia produced for the World Cup that year, as every year, but for me, you can’t get much better than a Panini sticker album.

The Mexico 86 one has always been one of my favourites, partly due to the fact that it’s the oldest one I still have that was originally mine.

I bought an Espana 82 one off ebay, but it doesn’t have the same sentimental attachment when it’s not yours.

Add in the fact that it’s the only one that features both Scotland and Canada and now it’s even more special!

Remember when we both qualified for World Cups? Sadly a whole generation on both sides of the Atlantic doesn’t, but we always have our Panini memories. 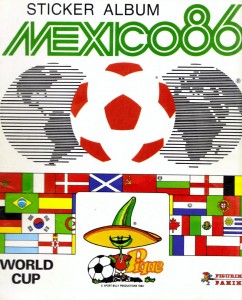 The 52 page album featured 427 stickers in all, featuring World Cup posters of years gone by, host cities, stadia and, of course, the teams and players. It cost 20p in the UK, 49c in Canada and 35c in the US.

Sadly my sparsely completed album will cost an arm and a leg to try and complete now, but I do at least have a completed Canada page!

And what a hairdresser’s nightmare that now looks!

With Canada being minnows they weren’t afforded the two page spread reserved for the bigger sides. They were reduced to a single page effort, along with the likes of South Korea, Iraq, Algeria and Morocco. Only Iraq and Canada have never qualified for the Finals again. .

The players couldn’t even get a sticker each and had to share their moment in the spotlight with a team-mate.

You did at least get the squad photo and the highly sought after silver foil badge in the ten sticker collection.

It’s interesting to look back on the 16 players featured.

When I was sticking those into my album 26 years ago, I never thought I’d be living in the mysterious country of Canada, never mind chatting regularly with many of the players featured. 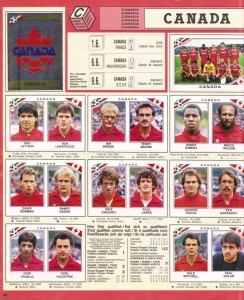 Bobby Lenarduzzi still has his full head of hair, but the others haven’t fared so kindly!

Carl Valentine isn’t quite sporting an afro in the photo but it’s certainly more than he has now. Current media pundits David Norman and Paul Dolan must be looking back on these photos and reminiscing about many things, and like myself, combs being one of them.

Ten of the 16 players played for Vancouver Whitecaps/86ers at some point in their careers. How times have changed with the current Canadian national team, never mind the actual Canadian content with the Whitecaps first team.

Will Canada ever reach another World Cup finals? Will it be Rio, or will we have a longer wait?

Whenever it does happen again, I’m looking forward to adding a new set of Panini stickers to my collection.