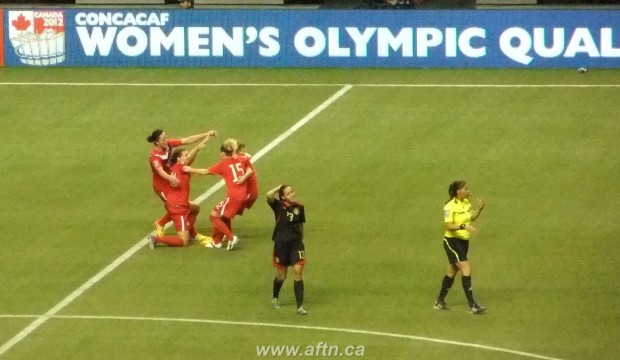 There are moments that athletes look back on as the defining ones of their career.

For members of Canada’s Women’s National Team, tonight was a night that they will never forget, as they clinched a qualification berth to the 2012 London Olympics with a hard fought out 3-1 victory over Mexico in front of a record 22,954 fans at BC Place.

To secure one of the two spots available to a major tournament was an achievement in itself. To do so on home soil, was probably a once in a lifetime moment in these girls’ lives.

Most of this squad will be around in 2015 when the World Cup comes to Canada, but as hosts they don’t need to qualify. This will be a moment for them to savour and with the spirit and fight they have shown in this tournament, you just know that there are a lot more to come in these women’s careers.

That’s a lot of rhetoric and hyperbole I know, but when you listen to the girls talk about their experiences here, it isn’t being overblown.

It was a tense start. You would have expected nothing less in such an electric atmosphere, with so much on the line.

Canada ideally needed an early goal to calm the nerves. It didn’t come too early, the 16th minute, but when it did, you could hear and see the joy, and relief.

Melissa Tancredi met a cross from the left and knocked it down perfectly into the path of Christine Sinclair, who composed herself perfectly and hit the ball into the roof of the net, to send the Canadian throngs into rapture.

Canada nearly got their second in the 22nd minute. Canada cleared a Mexican attack and Sinclair played a lovely long ball over the Mexico defence from inside her own half. Tancredi ran onto the pass but hit it inches wide.

But the Tanc was to get on the scoresheet moments later.

Sinclair took the ball in to the box and was clattered in a terrible challenge that looked to be a clear penalty. The referee played the ‘advantage’, and as the ball came to Kelly Parker, she hit it across the goal for Tancredi to fire home.

The celebrations were muted as concern grew over Sinclair’s ankle, but she was soon back up and running around and attention started to creep just that bit more towards London.

The half played out with Canada seldom troubled, but equally, they were seldom troubling Cecilia Santiago in the Mexican goal.

Two up at the break, the Canadian girls were in control, but you knew that Mexcio were going to come out all guns blazing in the second half, and they did.

Canada had a bit of a scare in the 55th minute when substitute Anisa Guajardo sent an inviting low ball in for Maribel Dominguez, but the danger was cleared for a corner as the Mexican captain was poised to shoot.

Karina Leblanc produced a contender for ‘save of the tournament’ in the 67th minute, when she acrobatically tipped over Monica Ocampo’s fierce strike from the corner of the box.

The resultant corner was placed right on top of Leblanc, who punched clear under a mass of bodies, but only as far as Veronica Perez, just inside the Canadian box, who hit a thunderbolt through a sea of players into the net.

Canada had almost seemed to be sitting back and were punished for some sloppy defending. The goal would now be a wake up call and show what the team was made of and where their mental fortitude now lay.

It spurred the Canadians back into life.

Sinclair came close to restoring a two goal lead, when she head a corner wide, but she was not to be denied, and made it 3-1 in the 76th minute.

Tancredi again played provider and looped a beautiful defence splitting ball for Sinclair to run on to, which she dutifully did before lobbing the advancing Santiago.

That goal settled the nerves of all Canadians in the stadium, but Mexico showed that they still posed an attacking threat and Leblanc was forced to turn over a cross-come-shot from under her bar, with nine minutes remaining.

Mexico harried for the remainder of the game but couldn’t find another way past the Canadian defence.

The final whistle signalled joy on the pitch, on the sidelines and in the stands. Canada would now be at this summer’s Olympics and they did it in some style throughout the tournament. As the players did a lap of honour with the Canadian flag, the future is looking bright for the women’s program in this country.

They all deserve every minute of the glory and attention that’s going to be now put on them. They did their country proud.

The attendance at tonight’s match set a CONCACAF record for a women’s Olympic qualifying match.

With the grit on display, the atmosphere generated and the Americans waiting in Sunday’s final, I don’t think we need to write that figure in the record books in ink just yet.

Canada have now achieved two of the three goals they set before the tournament started. One to go.

It may not be the most important one, but you can be damn sure that it’s going to mean a hell of a lot to everyone involved with the team if they get their three wishes. 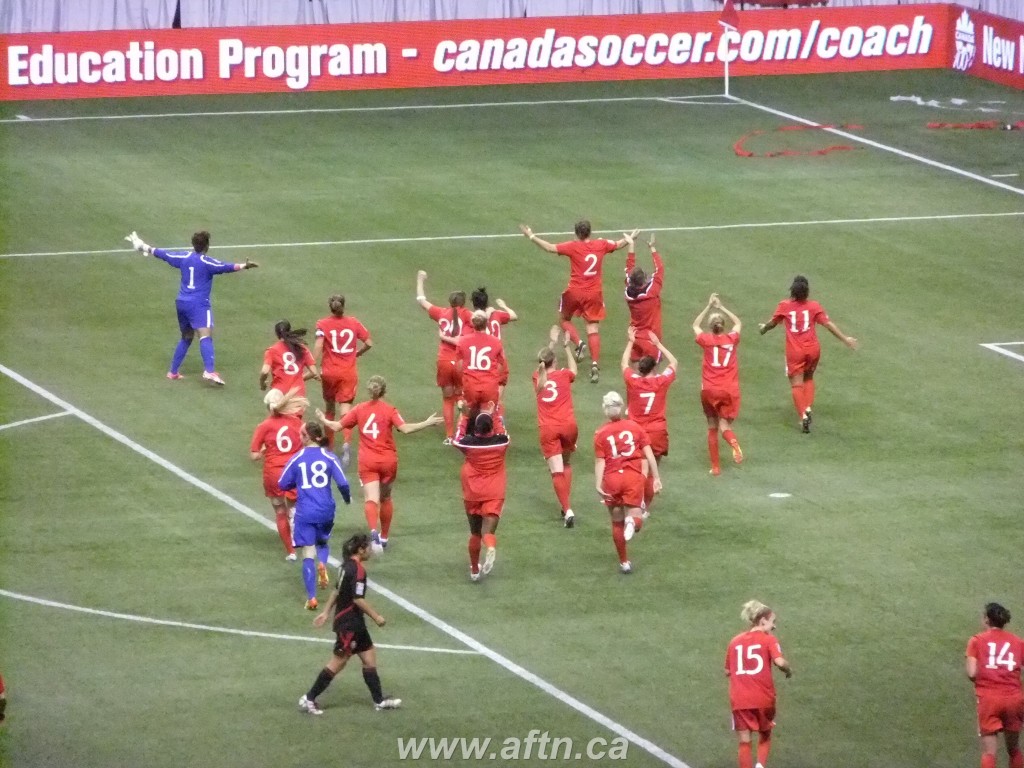