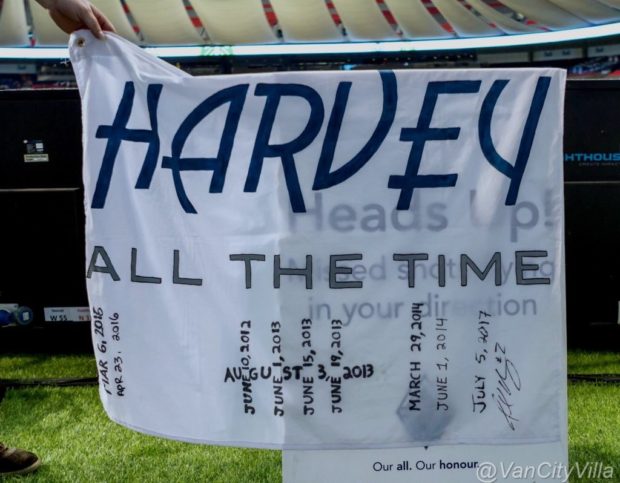 Last November, a couple of hundred of us were stood in the cold rainy wind high up in the away supporters section at Century Link, watching dejectedly as our team was bundled out of the MLS Cup playoffs with a dire performance to fall 2-0 to the Sounders.

As the team milled about in the centre of the pitch, a solitary player made his way over to our corner, clapping up to lofty heights. Jordan Harvey cut a lonely figure way down there, as he stood still, applauding us for what seemed like a full minute. He clapped as his teammates joined him and as they peeled away one by one, Harvey stood alone again, arms above his head. still clapping for us. It was poignant, and you could feel it. We all knew this would be the last time. It was his 200th and final appearance for the club.

Jordan Harvey was like that though. He was always the guy that came over after a match and acknowledged the efforts of the supporters. Even on nights when the Southside was embarrassingly quiet, and especially when the team played poorly in front of us, he always seemed to keep the faith. Sometimes he was the only one who applauded the fans, although David Ousted often joined him. For whatever reason, his small act became a big deal. A deep bond formed with the Southsiders during the years he played in Vancouver. In the Pigeon Loft we made him our first honorary Player Pigeon. 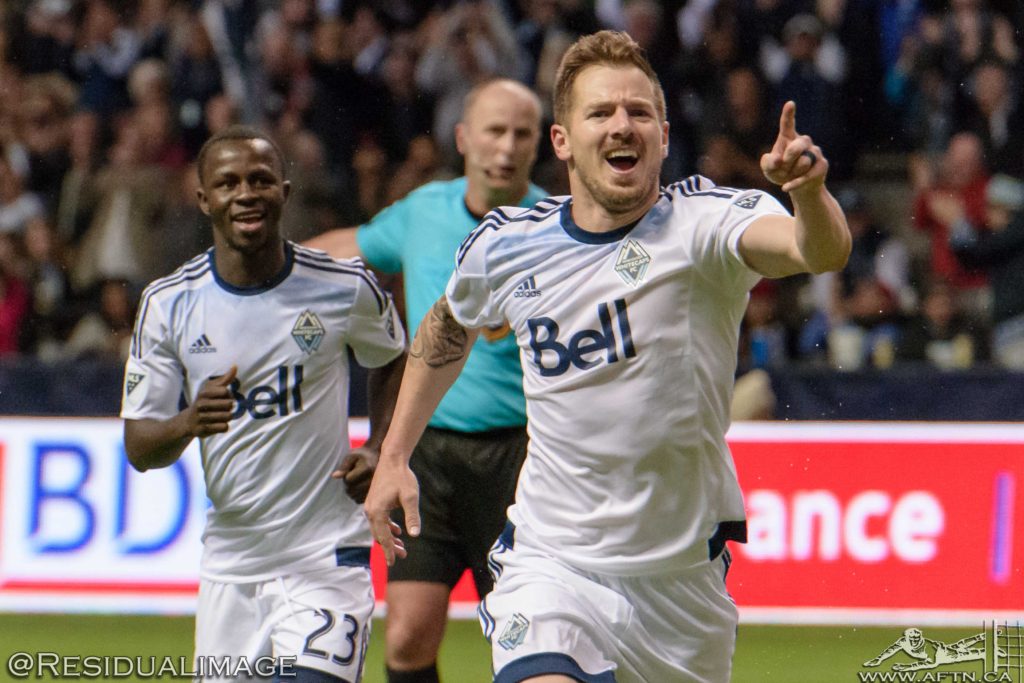 His acknowledgement of us and his affable personality sometimes belied how much he cared about results. Paul Sabourin-Hertzog, a Southside capo, shared a story with me that captures this:

“This was after the 2013 Voyageur’s Cup final at BC Place against Montreal when we “lost” 2-2 on aggregate. After giving up the tying goal Harvey was still flying up the wing. Had a header and in added time, a shot that went off the side netting. I was on the field capoing and was gutted. I waved a flag and sang the players off the field, and watched as Lord Bob did his death march to hand over the cup. After we’d cleaned up, a sorry group of us were heading out from the lockup and Harvey came out of the locker room, head down. We called out to him and someone said thanks, and he reacted with an angry “for what?” We told him that we saw that he was killing himself to the last minute, and that he was hurting from losing the Voyageurs Cup again, like we were, and he thought about it and nodded and headed out ahead of us. He knew how much it meant to us supporters, particularly having been snakebitten in 2011 and 2012 by TFC. No one else on the team really seemed to get it, but he did.”

I can’t remember who came up with his song, but it was based on the Eddie Murphy song “Party all the Time”. We all just wanted to Harvey All The Time.

Although he arrived in 2011, it wasn’t until Alain Rochat’s untimely departure that Harvey became a starter. He was a solid, some might say typical, American full back. Worked hard, kept a positive attitude, rarely seemed to get burned. He wasn’t the fastest player, and for that reason he became a polarizing figure. Supporters lauded his work rate and responsibility. Detractors saw a guy that was slow and average. I never understood that. Harvey was consistent and reliable through his seven years at the club and left back was the one position we never worried about.

Harvey was always remembered for his goal scoring. It didn’t happen often, but when it did it brought down the house. Whether it was an opportunistic volley, a critical header against a rival, or a trademarked onetimer from an unmarked far-post run, Harvey poached a few beauties in his time.

Kris Aug, the Southsiders’ famous lone wolf supporter, and a guy who actually gave Harvey a flying lesson made a Jordan Harvey rail banner that dated each one of his goals. In the last couple of years, Harvey himself was invited to add them after the match, in Sharpie, with a huge grin on his face every time. 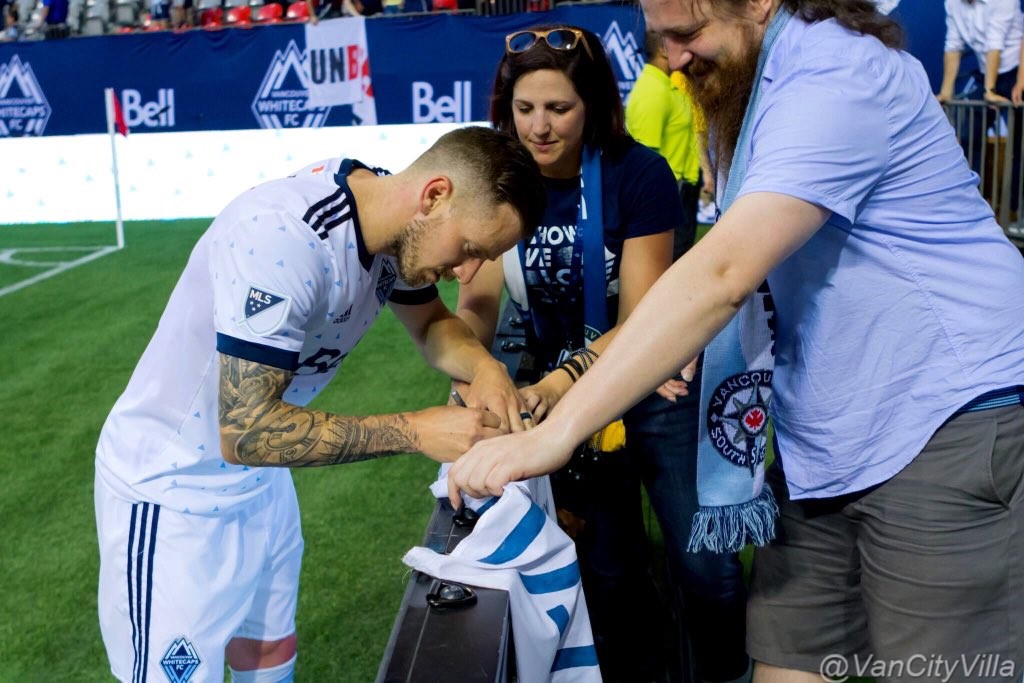 All week I’ve been collecting stories about Harvey and many relate to how special he made people feel. Our AFTN team has fond memories of him taking time to make Steve’s kids feel special or Zach’s stories of Harvey leading The Humba and even The Lambada over in the Curva Collective.

And of course every time Michael had some new strange interview segment he wanted to try on the AFTN podcast, Harvey was always happy to offer himself up as the guinea pig.

Vancouver clearly meant the world to him. His daughter was born here, his life was settled here and we loved him. He had a massive, beautiful sleeve tattoo on his right arm featuring BC Place and his wife Kim and daughter Harlow walking on the seawall in Stanley Park.

On Friday night, we got to sing for him one last time during the pre-game ceremony. I can’t remember ever singing for an ex-Whitecap wearing another team’s colours, but that’s how special he was to us. During the match however he wasn’t spared derision, especially when he managed to run the ball over the by line right in front of us. It was one of the few things we actually got to take some delight in on the night.

Guys like Jordan Harvey don’t come along every day. They are special. Our team has turned over a lot of faces this season and while we’re developing bonds with new guys like Kei Kamara and Felipe, it takes years of commitment to the city, the team, and the supporters to become a legend like Harvey. It breaks my heart to see him in another team’s colours, but I know he’s happy in LA, back home, family in tow and ready to start the next chapter of his life. And he knows that inside his BC Place tattoo, are hundreds of us. When he folds his arms across his chest, we’ll always be close to his heart.