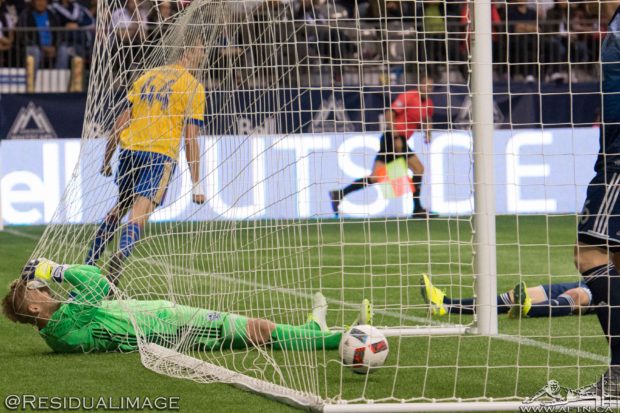 An MLS season comes with no guarantees. We start in the promise of spring, a transfer window of moves that is intended to shore up the inevitable failing from the previous season without disrupting the success. A reassessment of where adjustments need to made and what needs to stay the same. A cursory look at what our rivals are doing. It all represents a best guess and then gets thrown to the winds of chance, emergence and surprise.

Who would have seen the Whitecaps go from the best defence in MLS to the worst in half a season? Who could have predicted how heavily impacted our side would be by a league and referees trying to find their way with discipline? Who could have imagined the freakish injuries to our strike core? Who could have guessed that our hopes would be carried by Erik Hurtado?

And who could have imagined that the most heartbreaking games would actually be a 2-1 win against Toronto and a 2-2 draw against top ranked Colorado?

Perhaps the only things that supporters were sure of was that David Ousted would continue to keep us in games we had no business being in, and that Octavio Rivero was almost doomed to have his MLS career end in a mid season transfer, leaving as a hard working hold up man with an almost mystical inability to finish.

I used to try to imagine what it would be like to be a supporter of Alex Ferguson’s Manchester United or Pep Guardiola’s Barcelona or Bayern Munich teams: every week you enter the stadium basically guaranteed a win. What does that even feel like? Do you get inoculated against success? Is it any fun to see your team roll over Norwich, Getafe or Werder Bremen on such short odds that it’s not even worth a punt? How do you stay emotionally involved with a team that just wins everything all the time?

Instead of uproar and clamour, matches end with professional handshakes and a lot of chin-rubbing about Mascherano’s deployment as a holding midfielder vs. centre back. I imagine post game conversations to have the character of book club discussions on topics of early European philately: erudite, rational and with nary a salty drop of emotional investment spilled.

Of course when these teams falter, the only response is sheer bloody panic as the entitled stream of silverware suddenly diverts to other clubs and the brutal blood letting begins. What fun.

For all of MLS’ failings, it at least has the element of surprise going for it. The league is so balanced that even in the dying weeks, entire sections of the table can be traversed with a single set of results. No one aims for a merely respectable finish, because first overall and an MLS Cup is up for grabs by almost every team, every season.

For supporters this makes for some pretty compelling action. if you dive in a little and stick with it for a season you will experience a full range of emotions. In just a half season we have already felt the deep despair of a cataclysmic Cup Final failure, the elation of a comeback derby win, the curiosity of playing a new opponent (with another to come next month), the reimagining of the squad plagued by surprising lapses and frustrating injuries and disappointments, and even some good old chin-rubbing tactical decisions.

Many people will come to a Whitecaps match or two over the course of the year to see the football, as the quality is pretty good and you might catch a glimpse of a name you’ve heard of. Still others have season’s tickets but don’t really follow what is happening in the rest of the league. Every opponent is simply the foil to the home town team, and other than those big names, it might as well be the same guys week after week in different coloured shirts providing a spectacle for the masses.

But for those of us who follow the league more closely – and our numbers are surprisingly small in Vancouver – every game is another small chapter in the story of the season and the season is a much more engaging and emotionally provoking territory than you might think.

I admit that I have to check the standings before every match to see where we are this week, see who is around us, understand what Robbo is likely to do depending on what’s going on, what’s coming up and who’s actually available. And it suddenly means something a bit extra when we surrender a late goal against Colorado but come back with authority against Real Salt Lake.

What it means is that wins and losses are very different than they are in a league in which a few teams dominate the top echelon and everyone else settles for sixth with back slaps and rewards.

While we would love to win every match, that simply doesn’t happen in MLS, and at the end of the season there will be a mere win or a draw that will separate many of the teams in the playoff hunt. And so every game matters, not just because beautiful football might be played out there (or might not, you never know!) but because every point gained or dropped really matters.

While we are unlikely to see a Cup Final end so devastatingly as it did on June 29th, those points we dropped against the Rapids could have been our MLS Cup chance gone as well, just as the win against RSL might have actually saved our season.

It’s the not knowing week to week that keeps me coming back, keeps me looking for one more angle deeper into the story that is unfolding with Robbo and our squad, keeps me interested in the endless problems and solutions, the experiments and the stabilizations.

Say what you want about the league, but once you’re bit by it, it’s hard to take your eyes off it.