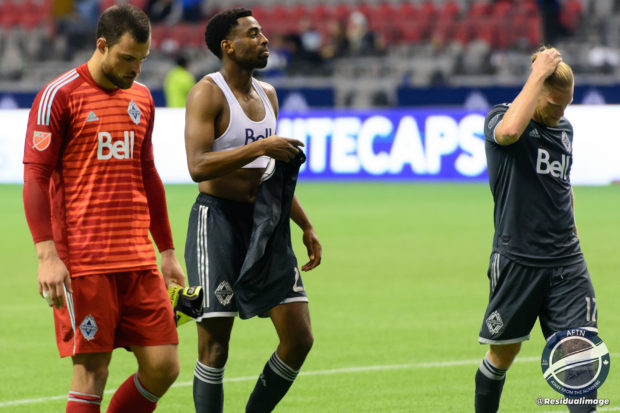 …With apologies to T.S. Eliot…

We are the hollow men
We are the stuffed men
Leaning together
Headpiece filled with straw. Alas!
Our dried voices, when
We whisper together
Are quiet and meaningless
As wind in dry grass
Or rats’ feet over broken glass
In our dry cellar

The Thursday before Thanksgiving I sat at the airport at gate C47 awaiting a flight to Toronto. It was to be my only away trip of the year, to see the ‘Caps, visit family, will some joy out of this lost season. Out of the quiet morning I lifted my head to see Nicolas Mezquida shuffling towards me, followed by the rest of the team, quiet, professional, serious looking.

I sought out Kendall Waston sitting a few seats away from me. Nico took my phone and captured a photo of us together.

There are two captains on my flight to Toronto this morning. One flying the plane, and one that matters: @kwaston88

I muttered a few words of encouragement. I said hi to Felipe, greeted Marinovic, and looked into his eyes, which were once marked for being crazy and now looked just empty. He was good, mostly. A bit, y’know. But good. Personally speaking. No, didn’t bring the dog on the trip.

Eyes I dare not meet in dreams
In death’s dream kingdom
These do not appear:
There, the eyes are
Sunlight on a broken column
There, is a tree swinging
And voices are
In the wind’s singing
More distant and more solemn
Than a fading star.

Fuck it, I thought. I’ve travelled to a half dozen cities to watch eight Whitecaps games and I’ve only ever seen one win, a 2-1 victory delivered off an Andrew Jacobson volley in Montreal. I endured the drubbing in Seattle last year when our legs were kicked out from under us, when the end began, when the hollowness began to eat away at us. I’m sick of spending hundreds of dollars to watch a team bunker down and duck, away from home. Let alone at home.

And here they were, right in front of me. With only a nervous interim manager to stop me from standing on a seat and imploring them, in a dry cracked voice, to simply let go and play with joy.

Let me be no nearer
In death’s dream kingdom
Let me also wear
Such deliberate disguises
Rat’s coat, crowskin, crossed staves
In a field
Behaving as the wind behaves
No nearer—

Not that final meeting
In the twilight kingdom

I didn’t want to stand in the cold high reaches of the shed at BMO Field, gazing distantly down upon an effortless disappointment. I half thought about not even going at all. I was, for the first time, feeling brazenly uncommitted to attending a match for which I had a ticket. Against a rival. With some half grasped-at thread of hope still to play for.

But I didn’t stand on the seat and call them to arms. I just boarded my flight, in zone four, watching them all parade past me, only Yordy Reyna and Felipe joking and smiling. Others were quiet, and stoic. Russell Teibert looked like an assassin preparing for a job, double checking his tools, memorizing the names of his target’s pets. Brek Shea looked insane, half crazed and dangerous. I’m surprised he made it through security.

This is the dead land
This is cactus land
Here the stone images
Are raised, here they receive
The supplication of a dead man’s hand
Under the twinkle of a fading star.

My dead man’s hand had only a pen and some paper, and so I wrote a letter to Kendall Waston, said something about how we were all still here, zombie eyed and quiet, watching the rubble of the past few weeks smouldering below us, wondering how everyone was doing, barely able to sustain a gaze upon the wreckage for the remainder of the year. I said things I meant about how much I have enjoyed to see him here as our captain, to take his place in his national side, and how much it means to me when he plays with joy and energy. I simply said, please, just play with joy, remember what it feels like when you love it. Play for yourselves, play for us. Damn the results. See what happens.

He was sitting a few rows behind me and I handed him the letter. He read it and thanked me later in a short tweet somewhere over Manitoba. And then I did take my stand, and wrote a tweet storm imploring the team to forget everything and approach the match with joy. Play with joy. Please. For us, if for not other reasons. For the twenty of us that stared folly in the face and made the trip anyway, to the grounds of a proper slaughter. For redemption, for something. Anything. Your contracts perhaps, if that mattered to you. Your dignity.

In the alternate reality of the twittersphere, I was promised the job of manager.

Sightless, unless
The eyes reappear
As the perpetual star
Multifoliate rose
Of death’s twilight kingdom
The hope only
Of empty men.

We won. Somehow, miraculously we won. Russell Teibert and Yordy Reyna took up the call and played with such energy and spirit, their goal may have been the purest expression of creative exuberance we’ve seen since the Columbus game in April. In the shadow of a dying season, with hope and support trickling away, with a few players inexplicably checking out, with a slender slice of playoff pie drying in the pan, we won.

And that was good, and beautiful and satisfying. An away win in a dark and bug filled Saturday night on the CNE exhibition grounds, in a parking lot of dashed dreams and baby donuts and spectacle and lost loves. Something conjured from the deadly boot of Russell Teibert, unleashed by the inspiration of his childhood, tapping the source that threw him into the game in the first place, drinking the adulation of his family and friends. Lighting up Google as we all searched for the moment five years before that was called back in this one.

I flew home on Sunday morning, to a bright day of sun and fog in Vancouver. A warm, windless day. Maples flashing red and yellow along Granville Street. A deep blue sky. No snow on the mountains and no foam on the sea. The white capped landscape was out of sight and out of mind.

I remembered that there was a match on, and an away viewing party at the Blarney Stone, which is a place I like and so, instead of taking the ferry directly home, I joined a few Southsiders and watched as the morning’s games unfolded. Montreal about to pip us for first seed in next year’s Voyageurs Cup. DC United clinching a playoff place. Portland ensuring that we only needed to beat them by 14 goals or something to make it into the playoffs. I did the most optimistic of actions and placed a cheque for next year’s ticket on the table. One ticket. Not the two I have had since 2012, when I had no trouble finding family members and friends to come with me. One ticket. A ducat of commitment and a declaration of belief that maybe things will get better next year.

Not with a bang but a whimper.

It took all of nine minutes for the air to leave my lungs. The fight back was admirable but inadequate. There was no joy on the pitch, only the space afforded Diego Rossi to shoot at will and the giant area devoid of ideas, hope, engagement or reason that surrounded Brek Shea ten yards in every direction. I sank into my seat. I resisted drinking the afternoon away. I hoped Phonize would not pick up a second yellow card, but a part of me saw the sweet poetry in him being suspended for the last game. I cheekily predicted a Jordon Mutch 40 yard screamer, two minutes before he unleashed one. Will and Peter and Steve heard me. It was my finest moment.

It is over now, but for a derby whose only meaning lies in saying farewell to what was on paper perhaps the greatest assembly of talent ever to take the pitch for our club. It was an amazing set of players who underperformed greater than any set of players I have ever seen. We are in danger of eclipsing some of our 2011 records. One final time this year, we will rise and wish and hope and sing for the ones who deserved it. No longer seeking approval or reciprocation, we will usher out this year in fancy dress and silliness. Nothing to lose but our anger and disappointment, cast away to make space for an afternoon of torpedo-damned fun in the land of the long shadow.

The team will not be the same next year, and I’m grateful. A new manager, new star players, new faces and names. The wheel turns. Our kid will ascend to the Bundesliga and we will wish him well. Some will move on to other challenges, some will begin their decline. Others will just fade from view, joining Mustapha Jarju and Barry Robson on the pile of failed experiments that have characterized much of the last eight years. To that collection we can add Ephraim “Effidios” Juarez, once a god to his fans, now the hollowest of men, the most stuffed of men, the most emblematic of this strange year.

I wouldn’t be surprised if the only player left standing is the boy wonder Russell Teibert, the Canadian Soccer Jesus himself, doggedly clinging to the relentless positivity that he wears as a badge of honour, presiding over a smoking ruin of promise and intent, holding aloft a homegrown contract and resting on the laurels of his best season ever. Somehow, perhaps, we found the talisman we have always searched for, always needed, lurking in the spaces unseen, popping in and out of the line up, capable of doing so, so much more, but only ever doing exactly what was asked of him. Mercurial and loveable, a budget superstar that has lasted longer than any of us could have imagined, but who has somehow avoided to attract the status of legend. All along, the perfect face of the club, and perhaps the only one who has ever really deserved to be it.