It’s a big couple of months for football on Vancouver Island. With Pacific FC getting ready for their first Canadian Premier League season, and the open tryouts in Victoria less than two weeks away, there’s a huge opportunity for local players to put themselves in the shop window.

That should mean a lot more eyes on the Vancouver Island Soccer League (VISL) this season, so no better time to bring back our weekly league round-up.

Week six of the 2018/19 season is now in the books, and it’s shaping up to be an exciting campaign with a few surprises already leaving three teams battling it out for top spot in Division 1.

Here’s how last weekend played out. 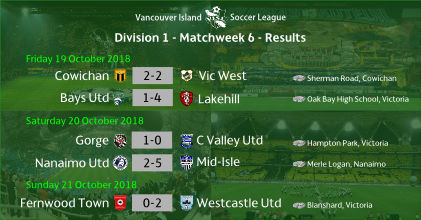 Cowichan hosted Vic West and it finished in a 2-2 draw. Cowichan goals were from Russell Lederer and Kevan Brown, with Vic West’s goals by Evan Gray and permitted youth player Salem Almardy, who is having a stellar year. The game apparently got heated on the Vic West side of things as they received two red cards in the last couple minutes of play. Another draw for last year’s champs Cowichan, and while they remain undefeated, they have three draws.

Bays United’s struggles continue as Lakehill went to Oak Bay High and defeated them handily 4-1. Lakehill markers were by Keegan Lang, permitted youth player Reid Adams, and Blair Sturrock with two. The Bays only goal was by Craig Gorman.

Gorge were able to sneak by Comox by score of 1-0 thanks to a goal by veteran Mike Moon. Gorge’s clean sheet was courtesy of Iain Walker.

The Match of the Week took place on the Merle Logan turf with Mid-Isle defeating then division leaders Nanaimo United 5-2 thanks to goals from Ryan Andre, Dan Citra, Jeff Travis, James Taylor, and Andres Algarin. Nanaimo responded with goals from Daniel Cato and Miguel Alabbasi. It was a massive win for Mid-Isle, moving them level on points with Nanaimo but putting them in first place thanks to a better goal difference.

The final match of the weekend was at Blanshard between Fernwood and Westcastle, with the visitors running out 2-0 winners thanks to goals by Joey Seo and Manhai Mammoud. Westcastle’s clean sheet was from Simon Norgrove, but the MVP of the match, in a losing cause, was the Fernwood keeper Jesse Rice.

Here are how the standings for the Division 1 Garrison Cup now look after Week 6, as the promoted team from last year, Mid Isle Mariners, lead the way, continuing to come up with big games. 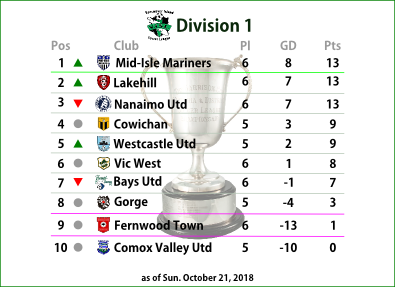 If you’re on the island and fancy seeing some live football this weekend, here’s the Week 7 matches. 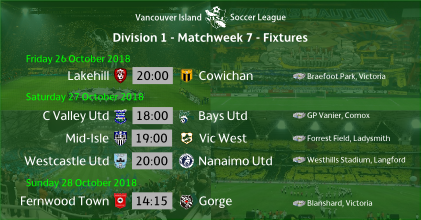