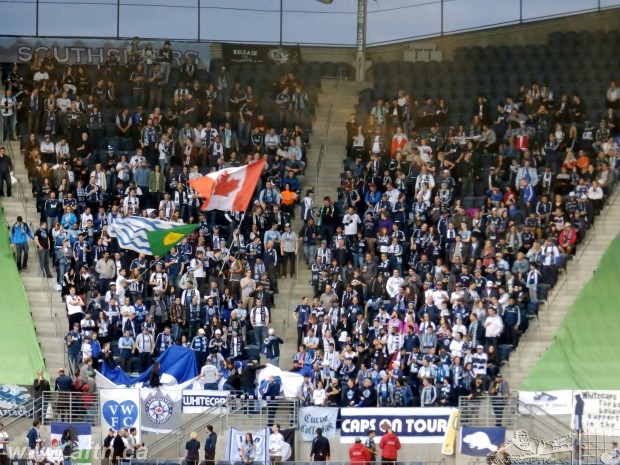 If absence makes the heart grow fonder then the proximity from Vancouver to Seattle must have the contrary effect.

In recent years the rivalry between our two teams has been characterized by all sorts of things, large and small, that would otherwise be meaningless if they happened in such far off places where supporters never go except in small numbers.

With only a few exceptions, our more distant rivals usually welcome us to the tailgates and host the travelling few who are able to undertake trips that would make a European supporter’s head spin. Our one away trip to Orlando for example is the same distance as every Newcastle Town away trip for an entire season. So we don’t really care about going to Orlando. Yes, some drunk fans last year got physically and verbally abusive with a few Southsiders and the police didn’t step in. But screw it; three points and a spin at Disneyworld.

But Seattle is different. It’s our closest rival, reachable with a thirteen hour round trip bus ride over an international border. There is a history going back 40 years and there is a trophy on the result of the season series. Our supporters groups have “a relationship” that is best characterized in Facebook terms as “complicated.”

But travelling away to Seattle is an experience every Whitecaps supporter should have. You simply need to get on the bus with 44 other supporters, many of whom will become your closest friends for a day. You will bond over the marathon that includes a famous stop for provisions at Cost Cutters in Blaine. You will unite against the one person on your bus who becomes your collective nemesis through breaking the essential rule relating to personal social comportment and lavatory protocol. You will live minute to minute. You will chant together songs custom made for the occasion.

Watching Bus A pass us on the I-5 with movies playing on their screens prompted a hoarse “You’ve got movies, we’ve got Riley” from the occupants of Bus C. In the moment, it was magisterial.

I am left with the sense of two unifying themes of this particular away trip: thievery and stuff that stinks. For we travelled to what is affectionately known as The Fishing Village, a middle Cascadian settlement of dubious parentage, indeterminate odour, all around larceny and the terrible petulance of Clint Dempsey and Chad Marshall.

Recently Seattle just stinks at home when they play us. Which, to be fair, is the nature of the Upper Cascadian derby in recent years where the best supporter experience is had while wrangled into the away section singing your heart out for the little white or green specks toiling away below for a road win.

It’s hard when you waltz into another team’s home and do things like win the Cascadia Cup on the strength of an injured teenager’s solo goal, as we did two seasons ago, or when said teenager scores his first hat-trick in 2013 in what is now infamously known by the hashtag #SE4TT1E.

Seattle were not bad on Saturday, but they were wearing our colours, which must have driven their crowd mad, and this experiment playing in blue has landed them zero points from three games and so, yes, they stink at the moment.

You know what else stinks? Mark Geiger’s refereeing. Everyone knows it stinks. It’s so terrible, there is even a hashtag about it: #GeigerShow. Over the years Geiger’s refereeing has denied us playoff advancements and more points than I can remember. In fact Geiger might well have stolen more points off us than we have stolen off of Seattle at Century Link. But Saturday, the booing emanating by the 20,000 strong below us, strongly indicated a collective sense that he was doing his best to balance our account.

The energy of these derbies is so intense that whenever we go to Seattle it’s not just points that get stolen. Last season we were deprived of a treasured relic of the Southsiders, a “Whitecaps On Tour” banner that has travelled with the group since the dark mists of our founding back in 1999. Or 2007 anyway. It was stolen from the railings in our section and later appeared being held upside down by Sounders supporters.

Just going back to the upside down Caps banner in the ECS end, here's the guys with it pic.twitter.com/KTI2Lbr0tR

It was never returned (RIP) but it did provide an excuse to produce a tifo version of that banner on Saturday made by the Curva Collective and executed by several hundred of us snuggled up against the Sounders’ much more impressive XBox tifo in the upper deck of The Clink.

It’s called “The Clink” by the way because it seems to be frequented by more than its fair share of thieves.

The trend continued on Saturday. Never willing to miss an opportunity, one of the three Southsiders buses had its custom sign stolen off it while stuck in traffic on the way out of the stadium on Saturday night. Another theft that still doesn’t make up for three points we stole on the basis of penalties awarded to us by Mark Geiger of all people.

Travelling away in large numbers is one of the things that brings supporters together. The Cascadia rivalry has generated some of the strongest teams and supporters groups in North America, and when you get a chance to travel you discover what it means.

You hear all the time complaints that when the Emerald City Supporters or the Timbers Army are in BC Place that they seem to outsing us. That is true of away supporters the world over. Being a few hundred together against tens of thousands forces you to bring your A-game. No one endures a 13 or 24 hour bus ride to our Cascadian neighbours to just stand and watch. You sing. You sing in the warm-up. You sing for 90 minutes. You sing for the cool down. You cheer on the subs as they run windsprints in front of you after the game, because it is the only time you ever get to see people doing an appreciative set of windsprints.

Three buses full. Another 600 joining by car. A victory in the fishing village. Three points smuggled across the border in the dead of night and a lifetime of stories to tell. How was your Saturday?