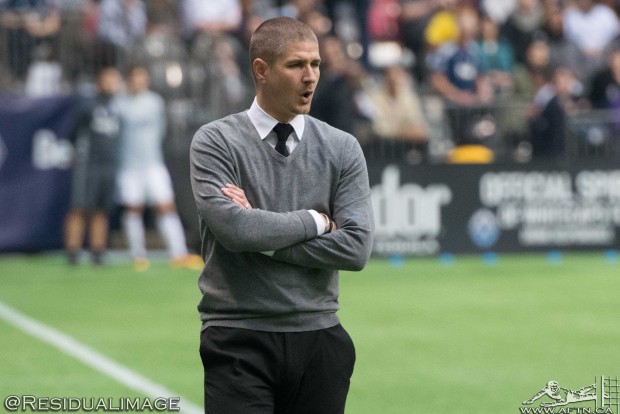 It’s almost been forgotten in all the pregame Canada v Mexico excitement and media coverage, but Vancouver Whitecaps have a tough Western Conference match-up against Houston Dynamo on Saturday night.

But before we get to AFTN’s coverage of that game, and what the international absences might mean to the ‘Caps, now that the dust has settled in Vancouver’s first win of the new season, let’s have a little tactical analysis on the much talked about 2-1 win in Seattle.

It was a game which saw two different formations clash. Seattle’s tried and tested 4-3-3 took on the shiny new flat 4-4-2 in the first Cascadia derby of the year. The 4-3-3 brings an obvious numerical advantage in the middle of the park, but Seattle, from the opening minutes, did not exploit this. The midfield three of Cristian Roldan, Osvaldo Alonso and Andreas Ivanschitz drifted apart in the search for space and gaps in the Vancouver defence, squandering their numerical advantage.

Vancouver lined up in a disciplined 4-4-2. There was a clear gameplan to get everyone behind the ball, and the organisation was such that Seattle were not able to break them down often. The attacking players’ willingness to help out was very obvious and important.

When the ‘Caps did get the ball, the gameplan was really quite simple: if it’s a counter attack, break down Kekuta Manneh’s side, and if it’s a slow build up to move up the field, the ball would go down the more technically gifted side of Christian Bolaños and Pedro Morales. This worked quite well: though almost nothing came from Kekuta Manneh’s counter-attacking, it probably kept the Seattle defence worried due to the destruction he has previously caused down there.

Bolaños and Fraser Aird had a good game. Their tactical understanding seems to have improved greatly. They were able to work with the right-sided central midfielder, Morales, very well. Seattle did try to close down aggressively, but Morales with the ball at his feet is slippier than an eel in an oil bucket.

Seattle didn’t really do themselves any favours with their shape: they made the obvious decision to put their best attacker on Vancouver’s most questionable defender. Dempsey vs Aird was what I worried about the most, but Dempsey kept drifting inside. He has never really been an out-and-out winger, but if Seattle had put one on Aird’s side we could have had a very different game. Dempsey was controlled because Vancouver consistently set up like the diagram below to stop him getting the ball to his feet. The trap that was set up prevented Dempsey from picking up the ball and turning to face the backline. At the half hour mark of the game, Jordan Morris switched to Aird’s side, but he didn’t really pose much of a threat. 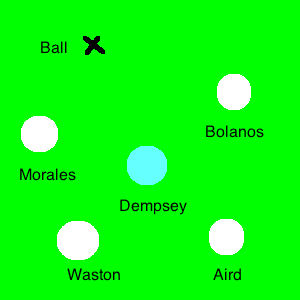 Seattle like to break teams down right down the centre, but Kendall Waston and Tim Parker worked out a great system to make sure that there was no space to either shoot or run into. Parker would step out and challenge the ball carrier as a “stopper”, while Waston played the role of the “cover”. This worked a treat for Vancouver against the likes of Ivanschitz and Dempsey who were trying to link up with Nelson Valdez down the centre all night long.

A quick word on set pieces.

Vancouver’s zonal marking is working very well. Waston must have cleared half a dozen corners himself on the weekend. We saw some success on attacking set pieces in the first couple of games, and I hope it continues. I would point out that this area has never really been the Whitecaps greatest strength, but with a bit of creativity we could see vast improvement, like the Cristian Techera miss late in the game. Before the corner is taken you can clearly see Blas Pérez signal exactly what he wanted to do, and it almost paid off beautifully. Harness the experience of players like Pérez and Bolaños.

Morales dropping to central midfield worked out very well. Pedro showed a willingness to get stuck in and cover for his defenders that we haven’t seen much of lately. I think the Morales/ Laba partnership in midfield could work very well against looser midfields like the one we saw in Seattle. An honourable mention though, to Ozzie Alonso, who at times single handedly got the Sounders out of trouble.

Finally, we come to the strikers.

We have seldom seen a two striker system in Robbo’s reign, but I think his admiration for Blas Pérez overcame his distaste for the most clichéd of tactics. Pérez is really what made this formation tick. He is defensively responsible, disciplined, clever, tenacious and hardworking. Everything good that the Whitecaps did at some point had to do with the big Panamanian.

Chad Marshall looked exhausted by the end of the 90 minutes. Pérez has a way of winning free kicks while still being a creative threat for the entire game. It’s almost like he gives the defenders a choice: foul me or I’ll do something dangerous. He also seems to bring the best out of Octavio Rivero, who again was dangerous but didn’t have much luck in front of goal.

My admiration of Blas Pérez went up a lot after this game. But Rivero deserves a mention for how hard he worked and the chances he tried to create.

The big question now is how will Carl Robinson react tactically after the Seattle win, especially with four key starters away on international duty? Does he have the personnel needed to stick with the 4-4-2 and is that even the best formation to use against a fast and dangerous Houston attack? We’ll look at that on Friday.