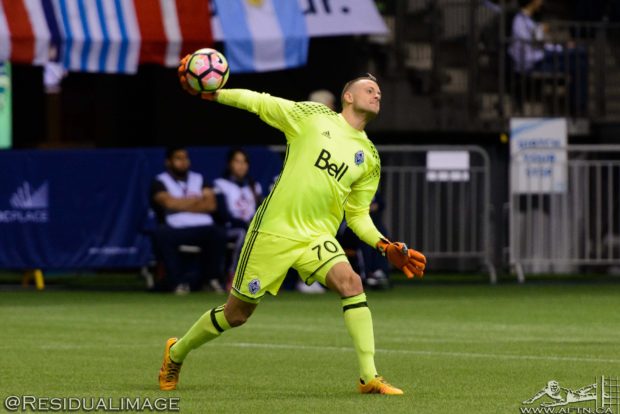 Here on the west coast there is always a moment at some point in the summer when you feel the change. A breeze contains the hint of a chill. You notice that it’s getting dark a little earlier. It’s a tiny turning point embedded in a still warm summer afternoon. But you know unequivocally that the change is coming.

It’s like that with the ‘Caps these days. While we are watching a steady climb up the table, we are also seeing a reinvention of the squad. Supporters are always calling for new and better talent to come in, and we’re sometimes vocal about the exit of players that – quite frankly – don’t fucking fight on a Saturday.

Today we’re looking at a much different team then the one that cleaned out the dressing room in November last year. All three of our DPs are gone, two permanently and one for the duration of the season. Our backline has been steadily shifting with the full back situation evolving. We have reinvented the midfield and strike force, and even Techera’s form this year has made him a different player. New players are coming in, but the change is now starting to affect the veterans too.

When Paolo Tornaghi left and Stefan Marinović arrived on the heels of a good performance in the Confederations Cup, I felt the turn, the chill on the breeze.

What is so important about a switch of our backup goalkeepers that makes this a weak signal of something else? Partly it was down to Tornaghi’s departure message to the supporters. “Make whoever is wearing your colours on the field and in the offices more accountable to you.” It was a message overlaid on a photo of him walking purposely towards the empty Southside. 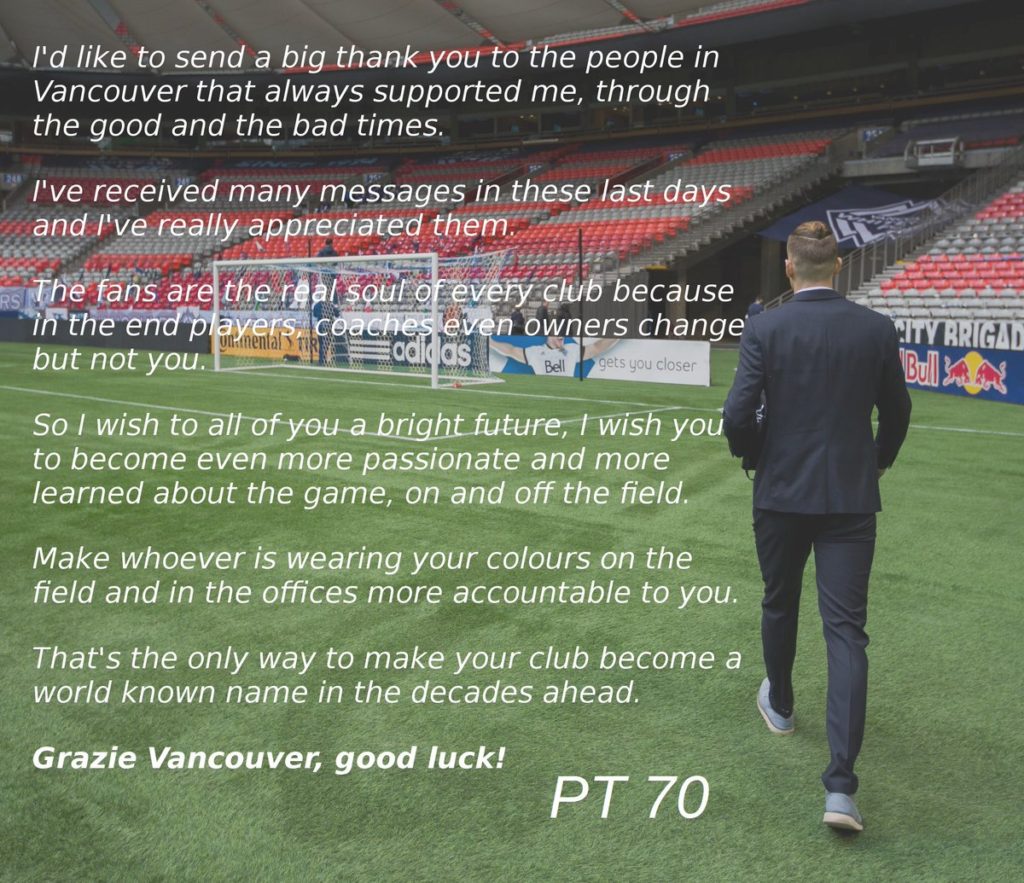 That got my attention, let me tell you.

Right afterwards, on an away match to New England, David Ousted and Jordan Harvey were dropped. Marinović and Marcel DeJong got the start. There was some confusion in the supporter ranks around Doc Morgan’s on Bowen island, where 30 of us were gathered to watch the match, but the penny was dropping. Both are on the last years of their contracts, both are no doubt thinking about their futures. Harvey didn’t even make the trip, for the first time in probably six years. Were they “rested” or were they benched?

Teams evolve and change, and it’s hard to see the biggest servants of the club begin an exit process. The Pigeon Casuals love Harvey and Ousted. We’ve recently given them scarves and two sticks to honour their service to the team and what they stand for: hard working, responsible, and always willing to hold themselves and others accountable. They play and lead anyway, to paraphrase one of our slogans.

By next March this team will have come through a massive transition, probably the biggest one in its MLS history, since we settled into the side we became after the chaos of 2011. What is demanded of us now is that we actively hold the coach and the front office to account for how this change goes. The team has a tendency to penny pinch, favour certain players over others, and tries to extract high value from low cost decisions. Not chartering last week to Orlando was a case in point. The front office might crow about how well that decision worked out, but there are dozens of others that have failed, including this that resulted in staff and players and long time supporters leaving.

We are experiencing a strange mid-summer upswing at the moment. If we play our cards right we may have some momentum going into this off season. Regardless, this may well be the moment we’ve all been waiting for. The club is already indicating that this is not an incremental change. Long time talent is leaving, and who knows how deep that will go into the coaching and administrative side of things.

My guess is that our front office will remain unchanged but that below that level anything might happen. It will be up to us to demand that the decisions taken from now on do not bungle this opportunity, resulting in us further falling behind the MLS evolution curve. Instead, we should be setting our sights on leapfrogging our rivals because another transition wasted will mire the club in the bottom of the league for years to come and the knock on effects will set loose a steady stream of negativity that will erode much of what we have left.

If ever there was a time to be bold it is now. And we’ll take Paolo’s words to heart, learn more about what’s happening on and off the field and hold the stewards of our club to account. The turning is upon us.