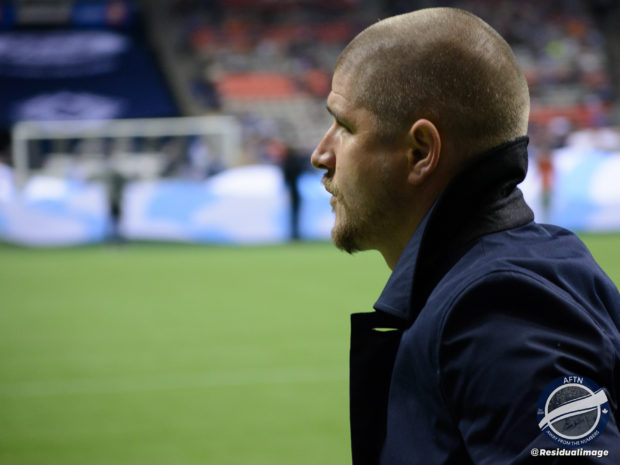 ESTRAGON: We always find something, eh Didi, to give us the impression we exist?
VLADIMIR: Yes, yes, we’re magicians.

It’s been an eventful few weeks since that 6-0 loss I Kansas City. Eventful like the action sequences in a Beckett play. We’ve hit a beige patch of form with three consecutive 2-2 draws, each one exploring the narrow nuances of a different tempered emotion: bemusement, anticipation, astonishment.

We are drifting, slowly gliding down the table, in a gentle descent, losing a few hundredths of a point per game at a time, while our inability to win gently lifts our opponents around us. We currently sit sixth, in a crap division, with our four draws holding us in a flirtation with the fine line of playoff contention.

This is merely the short wave of things at the moment. Our 6-0 loss to Kansas City, a defeat so bad even Carl Valentine could not recall a worse one, set off agitation in the supporters section and the Southsiders unleashed a protest message that was either poorly understood or poorly targeted or both. But to be fair, It’s hard to get right to the source of what ails the club in the long term.

Replace the manager and we still have the same owners and executive in place. Replace the front office, and we are still stuck with the same tactics. The calls for Robbo to leave have intensified, but the small shifts in tactics to a 4-4-2 and some of the good efforts on display of late have tempered that. But no matter: many people believe that a single cold winter day means global warming isn’t a reality. It’s not the daily results that are the problem. It’s the long wave trend that matters.

“We wait. We are bored. No, don’t protest, we are bored to death, there’s no denying it. Good. A diversion comes along and what do we do? We let it go to waste. Come, let’s get to work! In an instant all will vanish and we’ll be alone more, in the midst of nothingness!”

I remarked to someone from the club that the current problem with the team is akin to what happens when you try to run an old app on a new operating system. Our team was built for MLS 2.0, but that ship has long ago sailed and the developer isn’t supporting upgrades for the 3.0 firmware. There are a few other teams like that too in the league and one of them is moving to Austin while the other enjoys the highest altitude stadium and the second lowest points total.

After our latest 2-2 draw, when we all exited the Tardis for the third time, Felipe tweeted this out:

We are a TEAM. The effort from everyone at this club, from the door man to everyone in the staff. Every single person I’ve meet since day one in here is unbelievable. It’s time that everyone start to really support us and stick with us. TOGETHER we will make it. #VWFC

All I could say, to a guy that sometimes can’t even seem to support himself, is that we are indeed supporting you. We are still here. And we are calling for better. We are calling for silverware including the trophies all of our top rivals and expansion cousins have won. Since 2011, we have won a single national championship and that’s it. Surely Felipe Martins, a man that has won a ton of MLS silverware in his day, would not argue with a call for our team to aim at trophies. 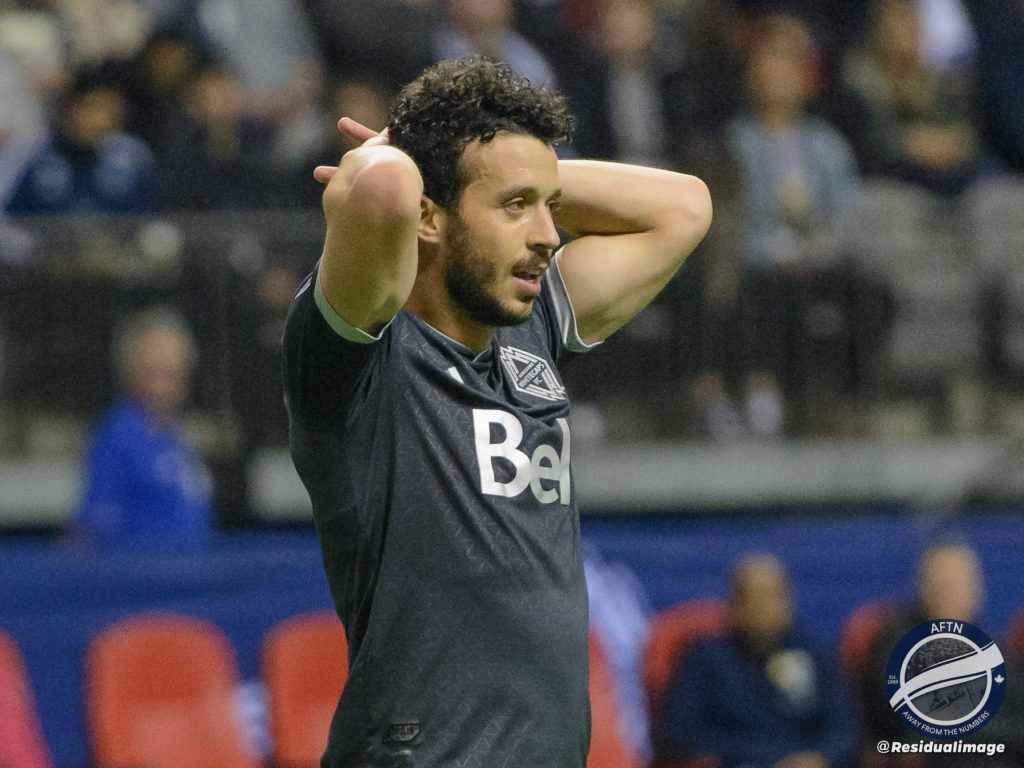 The problems are right in front of us. Our team identity is firmly established regardless of the squad: defensive football, systematic substitutions, a clear desire to beat players 1v1 instead of playing a possession style. We play dozens of minutes at a time absorbing pressure looking for the chance to counter and get results ground out through individual character or luck. Anomalies abound but we regress to the mean.

Our players are waaaaaay underperforming. When you look across WhoScored.com you can see that we only have three players rated over seven. Teams around us have six or seven of their top players with that rating. To me, that’s down to the coaching of our best ever MLS squad. Robinson is not getting the potential out of our guys. We don’t play together.

Our top rated guys display their quality mostly in their individual performances, Kamara, Davies, Levis and De Jong. Our highest rated midfielder is Felipe at 6.75, seventh in the club and that would put him out of the top ten on most MLS squads. Our overall average of team stats is 6.23. Good enough for 22nd overall. If “TOGETHER we will make it” we should probably try stringing together a few more passes.

That is what is concerning. The long wave, long term trend of this club is towards fading away. In a league that is improving around us, there is no way to hold your own. It’s an arms race in MLS 3.0 and we are admiring our muskets.

“All I know is that the hours are long… and constrain us to beguile them with proceedings which … may at first sight seem reasonable, until they become a habit.”

I firmly believe that there is a manager out there that can get high quality out of our players but I don’t think that’s the current boss, because he seems to want to manage out of an admiration for rational planning. And that’s why the fan base is so irritated. Staying the course takes us into efficient mediocrity. These draws over the past week have saved Robbo’s job. Late results leave you with endorphin flows that help blur the reality.

But it’s like waiting for Godot. The promise never comes.

What can be done? In order of easiness:

• Change tactics – something that seems to be happening in the last couple of games.
• Sign a dynamic number ten and make the 4-2-3-1 great again.
• Replace the manager.
• Make a solid case to the owners that their financial strategy needs to change.
• Bring in new investors who are willing to open their purses and use our DP slots to maximum advantage.
• Replace the management team.
• Replace the current owners. 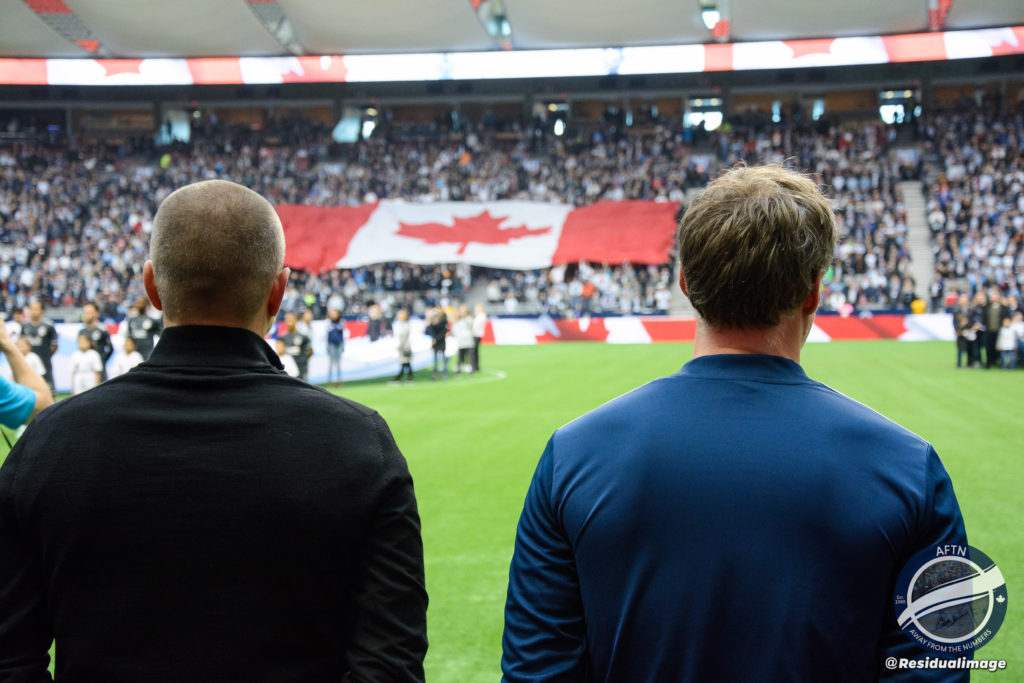 Right now is the time to make a bet on one of these changes. If we are to stay the course then it is time for Robbo to be bold and say something like “if I don’t win a trophy this year, I don’t deserve these players.” The Voyageurs Cup is now a non-negotiable accomplishment. Our rivals are garbage and we have no excuse not to compete. If we don’t upgrade now, it’s going to mean we’ll need a much bigger intervention later.

POZZO: I hope I’m not driving you away. Wait a little longer, you’ll never regret it.
ESTRAGON: (scenting charity). We’re in no hurry.

What does this mean for supporters?

It’s the fickle fans that are leaving, the ones that want to see the exciting attacking football Bobby Lenarduzzi promised us when we all began this journey together eight years ago. The hard core supporters are still here and I daresay some us remain optimistic that better is possible. But it’s becoming increasingly frustrating to see the team keep doing the same things it always does.

This year had some very exciting new faces and yet we still don’t know who many of these guys are, and we have never seen the same starting line-up twice. Fan favourites get dropped with no explanations. Guys in form see the bench. Subs happen based on scientific management principles rather than the context of the game.

Who is actually having fun? What’s it like outside the supporters section? Frankly, hanging out with the Pigeon Casuals and dancing five reps of the Nagila twice a night is the most fun I’ve had this season since our opening day win. We’ve been singing our asses off for this team, trying to conjure results from our mantras. But what’s it like for the rest of the ticketed crowd, to sit in your seat and not to sing? To only have recourse to watching what has been laid out for you to see?

Maybe most ‘Caps fans don’t look around the league and see what else is happening. . We are getting left behind and it feels like it. The squad overhaul isn’t working, not because we don’t have good players, but because we haven’t changed our approach. Time for a change. How long will we have to wait?