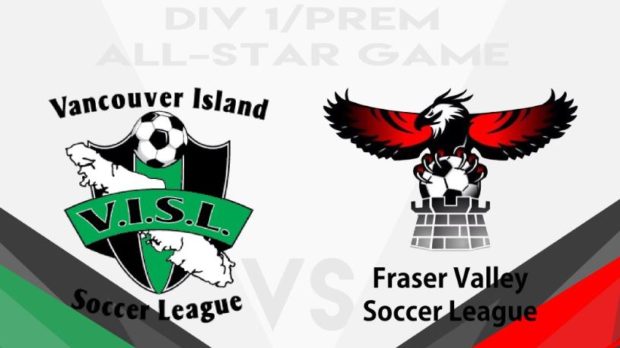 The local leagues were back in action this past weekend after the Christmas break and that meant the annual Vancouver Island Soccer League (VISL) All-Star weekend took place at Hampton Turf in Saanich.

The action kicked off at 10am with a match between the VISL Division 4 and U21 All-Star sides, with the young guns running out 3-0 winners. Prospect Lake’s Ydrisa DaSilva opened the scoring for the U21s in 20th minute before Michael Henman of Lakehill FC added a second 13 minutes later. Bays United’s Otniel Ionce rounded off the scoring on the hour mark. Mid Isle Mariners U21s keeper Evan Carr had the clean sheet, while his club teammate Seb Yan took home the Man of the Match honours.

Next up was the noon clash between the Division 2 and the Division 3 All-Star sides, with the lower league team pulling off a comfortable 3-0 shock win. Hellas’ Yanni Mavrikos got the Division 3 team off to the perfect start, finding the net just six minutes in. That was how it stayed until the second half when a 53rd minute goal from Gorge Us-Guys Brendan Andrews and a 75th minute strike from Castaways’ Tyler Ostapovich completed the rout. Gorge Us-Guys keeper Matt Cook and Bays United goalie Evan Pivnick shared the clean sheet, while Gorge Us-Guys Steve Gately was named Man of the Match.

The final two matches of the afternoon saw a couple of Fraser Valley Soccer League (FVSL) All-Star sides head to the island to take on their VISL counterparts and both left with closely fought victories under their belts.

First up were the Masters.

This game was dominated by the VISL side but it was the visitors who went ahead in the 11th minute through a Dave Morris (of SFC Temple United) penalty. Ian Johnston made some great saves in the first half to keep the FVSL team ahead. The visitors had much fewer chances in the second half but capitalized when it mattered most. They looked to be a very tired team in the second half and decided to defend, but they weathered the VISL storm and doubled their advantage in the 72nd minute through Temple United’s Bob Atwal. Gorge Backfit’s Francesco Cortini reduced the deficit to one, six minutes later, but the VISL lads couldn’t find the equalizer and FVSL were very happy to hear the whistle go to wrap up the game. Fraser Valley’s Shawn Blakeway (of Port Moody Rangers) was named the Man of the Match.

The afternoon rounded off with the star attraction at 4pm as the VISL Division 1 All-Stars took on their FVSL Premier counterparts, and what a cracker it turned out to be.

Closely contested, but goalless at half time, the VISL lads looked to have the game in control thanks to a 48th minute goal from Cowichan FC’s Patrick Nelson and a strike from Westcastle FC’s Koby Greaves five minutes later. But much to their credit, the FVSL team kept putting on the pressure and did not let up.

They were carrying plenty of the play and were rewarded in the 75th minute when former WFC2 captain Tyler Rosenlund (Burnaby Firefighters) volleyed home to reduce the home side’s lead to one. The pressure kept coming and they tied up the match four minutes before the final whistle through Whitecaps Residency alumni Mark Baldisimo (Coastal FC).

That was how it finished and FVSL completed their comeback on penalties to receive the trophy.

Postgame celebrations headed to the Strathcona Hotel, after what was a good day for amateur soccer in the province.

You can find photos of all of matches on the VISL Facebook page.