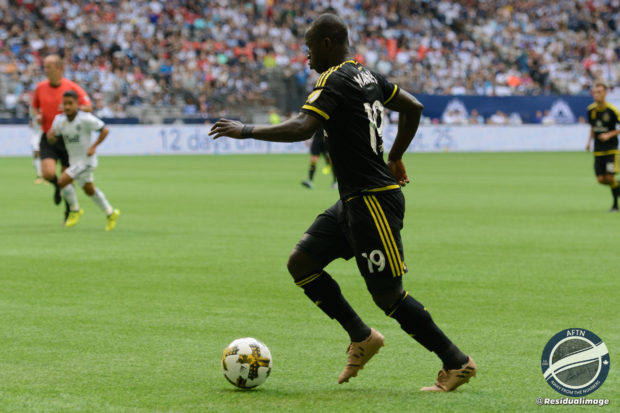 When Kekuta Manneh scored on Saturday afternoon at BC Place, he did something that no other player has yet done in the MLS era: he punished his former team in BC Place.

It was an odd moment. It was the first time in the MLS era that a player we have sung for has scored against us in our home. Some fans applauded at the time. Some cursed our transfer acumen, at least until Tony Tchani equalized in stoppage time. As for me, I applauded Scooter when he left the pitch. I was really, really happy when he left the pitch.

It did however get me thinking about the former Whitecaps that have punished us. A call out on Twitter led to a small list being compiled and so now, for your masochistic pleasure and in chronological order, here is what we believe to be a complete list of all five former Whitecaps players that have scored against us in the MLS era.

You could also add in two 2010 Expansion Draft picks, Alan Gordon and Sanna Nyassi. Both have scored against the ‘Caps but both were just here for a cup of tea and traded the same day there were selected (Gordon to Chivas USA and Nyassi to Colorado).

Both are far too tenuous to include, but both did score at home for San Jose Earthquakes against the Whitecaps – Gordon on April 7, 2012 and Nyassi on April 11, 2015.

Lee Nguyen left Vancouver after only a few games in 2012. It came soon after he tweeted an offensive comment, but the Whitecaps said at the time that that wasn’t the reason for his release. He found a home in New England right away and scored the first goal against us of a former actual player in the MLS era, and what a goal, as Nguyen half volleys a 35 yard rocket into the top corner past Joe Cannon.

Dunfield started and scored for the Whitecaps against TFC in Vancouver’s first ever MLS match on March 9, 2011. He was traded in July of that year and nearly a year later scored the winner against us in a furious 3-2 loss in Toronto, with a header off a Torsten Frings corner. What’s that about not celebrating against your former club?

When your backline is Nigel Reo-Coker, Jay DeMerit, Johnny Leveron, and Jordan Harvey, your opposition will be licking their lips to attack you on the right. And that’s exactly what the Union did to brilliantly set up Le Toux for a goal in a 3-3 thriller. Le Toux scored the first goal of 2012 for the ‘Caps as a part of “The French Connection” strike unit with Eric Hassli. Alas, his tenure in Vancouver was short-lived as he was never really happy here. He was pretty happy after scoring this one though.

While Mattocks had a few for us, mostly he drilled balls into the Southside for fun. But earlier this season, the inevitable happened. Playing for Portland he somehow managed to not botch a chance. He used his trademark speedy straight run to pass Kendall Waston and be in the right place for Diego Valeri to slide a perfect pass through the box and onto his right foot. If he had actually tried to bury that, he probably would have skied it. No wonder he celebrated.

The first ever goal against us at home by a former MLS player. Manneh’s goal on Saturday was one we rarely saw him score in a Whitecaps shirt. He always seemed to just roll the ball past ‘keepers. But Saturday he turned on the rockets, split the double shield, leaving Aly Ghazal and Tony Tchani for dead, and unleashed a howitzer before Tim Parker or Kendall Watson could close him down. Manneh’s dead pan non-celebration was priceless.